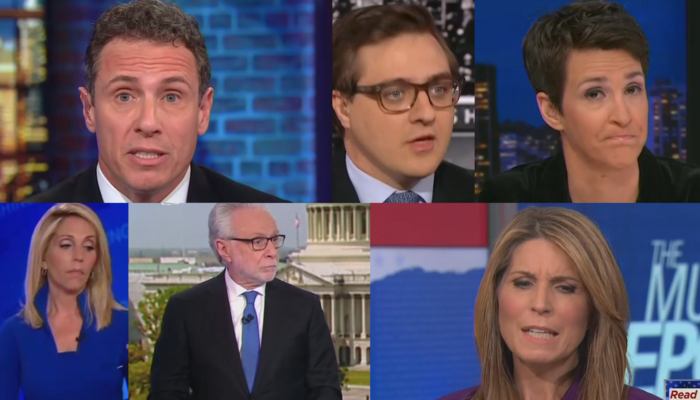 On Tuesday, Gallup announced that its latest poll on American trust in the mass media to report the news “fully, accurately, and fairly” hasn’t changed a bit from last year and is still just two points higher than the lowest that Gallup has recorded, during the 2016 presidential campaign.

Only seven percent of Americans said they have a “great deal” of trust in the media, and only 27 percent said “a fair amount.” By contast 28 percent say they do not have very much confidence in media and 38 percent have none at all. There is a new low here: this is the first time that the percentage of Americans with no trust at all in the media is higher than the percentage with a great deal or a fair amount combined.

As expected, trust in the media depends on which party you support. Only 14 percent of Republicans and 27 percent of independents said they have a great deal or a fair amount of trust in the media. But 70 percent of Democrats say that have a great deal or fair amount of confidence in the press. Gallup says there’s been a  “consistent double-digit gap in trust between Democrats and Republicans since 2001, and that gap has ranged from 54 to 63 percentage points since 2017.”

It’s obvious that the Democrats trust the media implicitly because the media sound like Democrats, spread Democrat messaging, use Democrat lingo, and routinely attack Republicans as evil cabal bent on destroying democracy. Then they wonder why Republicans and independents can trust them since they’re the “reality-based press.” Gallup offered these points on the partisan breakdown:

For the third straight year, the majority of Republicans indicate that they have no trust at all in the media. This figure jumped 10 percentage points in 2020 and has been at or near 60% since then. This year, 57% say they do not have any confidence, while 29% say they do not have very much.

At 27%, independents’ confidence is at the lowest point in the trend. This is also the first time that it has fallen below 30%. Meanwhile, 41% of independents say they have no trust at all and 32% do not have very much.

While the great deal/fair amount of confidence reading among Democrats has never fallen below the majority level, the proportion with a great deal of trust has not topped 26%, and it is currently well below that at 18%.

This poll follows Gallup’s finding of historically low confidence in both TV news and newspapers in June and a new low in December’s annual rating of the honesty and ethics of television reporters.

Gallup said these trends show no signs of abating. That sounds right, since the liberal media do not plan on changing the tone. CNN talks about doing more news and less opinion, but that’s not the way it looks to anyone watching it hour on the hour.