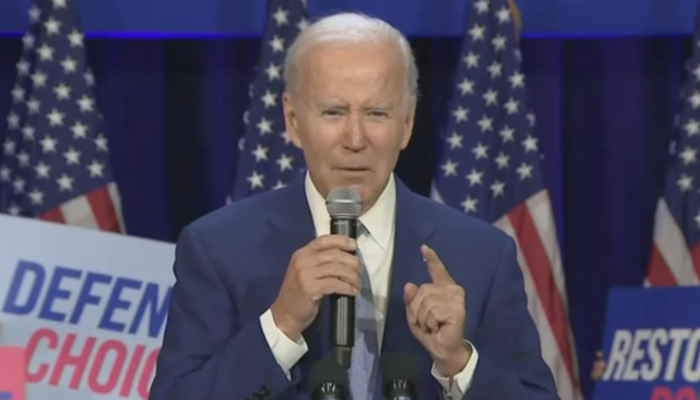 Week 91 of Joe Biden’s presidency, and he’s still willing to die on the hill of abortion rights. In an interview for “NowThis,” a social media “news” outlet geared toward young voters, Biden expressed his support for federally funded abortions in an interview could reach over 80 million young people, the majority of those under 35 years old, Axios reported.

Biden sat down with medical resident Danielle Mathisen, who asked whether he would or wouldn’t support taxpayer-funded federal spending on abortions. The full interview is set to air on Sunday, but the preview that Axios provided was enough to verify Biden’s pro-abort stance.

“The answer is absolutely…I do support that, and I’ve publicly urged companies to do that,” Biden responded.

“I’ve urged them publicly as president of the United States saying, ‘This is what you should be doing,” he told Mathisen, later insisting that companies should pay for abortions so that poor women, who may not have the financial option to abort their child, still can.

Newsflash: nobody should have the “option” to murder their innocent kid.

March for Life President Jeanne Mancini condemned Biden’s support for tax-funded abortions in her comments to the pro-life outlet LifeNews.

It is heartbreaking to see President Biden is so obsessed with abortion on demand that he is willing to use American tax dollars to push for more abortion rather than offering federal funding for lifesaving options offered by pro-life organizations and maternity homes around the country.

Mancini is right. For being such a “devout Catholic,” Biden sure does make it his life’s mission to allow and encourage the death of innocent children.

In the same week as the taping of the “NowThis” interview, Biden presented in front of the Democratic National Committee (DNC) his plans to “codify Roe” if Democrats retain control of Congress in November.

“Here’s the promise I make to you and the American people. The first bill I will send to the Congress will be to codify Roe V. Wade. When Congress passes it I will sign it in January, 50 years after Roe was first decided the law of the land,” Biden told a crowd of young people at a DNC event Tuesday.

On Thursday, Biden reiterated his love for abortion when he neglected to answer a reporter’s question about his views on abortion restrictions.

Reporter: “Should there be any restrictions on abortion at all?”

Biden: “Yes. There should be.”

Reporter: “What should they be?”

Biden has made it abundantly clear that he is the most anti-life president ever and his daily push for more and more abortion access, now at taxpayer expense, is the unsettling reality of who we’ve got occupying the White House.