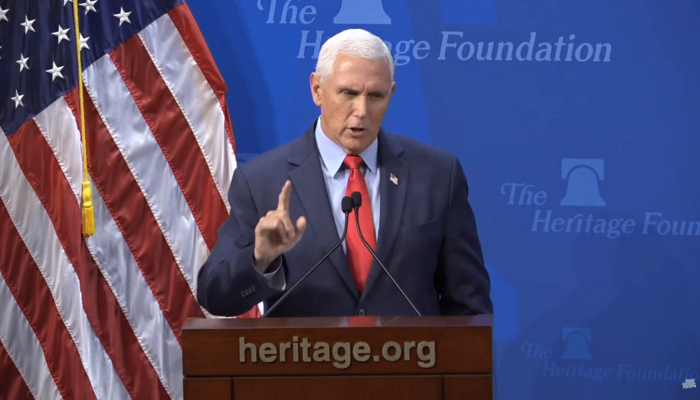 “We gather at a very serious time in the life of our nation. Today American freedom is under attack,” Mike Pence said. “Big media, big government, big tech, and even big business have locked arms to advance an agenda antithetical to some of the greatest traditions of this country.” This is how Pence began his speech at the Heritage Foundation on October 19 regarding the Freedom Agenda for his organization called Americans Advancing Freedom (AAF).

He said AAF’s Freedom Agenda was created by combining what have been the animating ideas of the conservative movement from Ronald Reagan to Donald Trump and putting them all in one place.

It is a three-part agenda and part 1 is American culture.

He then ramped his rhetoric up, remarking that “If we allow the radical left to continue dumping toxic waste into the headwaters of our culture, our politics will only get more poisonous over time.”

Pence also talked about preserving the American principle and belief that each of us is endowed by our creator with certain unalienable rights of life, liberty, and the pursuit of happiness.

That is why he begins the Freedom Agenda with life

Pence said, “To restore American culture, we must restore the sanctity of life to the center of American law in every state in the country.”

Pence then celebrated the fact that because of the Trump-Pence administration confirming three conservative Supreme Court justices, the Supreme Court of the United States “sent Roe v. Wade to the trash heap of history where it belongs.”

However, Pence said this is only the beginning of the battle for life.

He brought up Biden’s pledge on Tuesday that if Democrat majorities were reelected in the house and the senate that he would codify Roe v Wade into law on its anniversary in January.

Pence said he was not surprised, but he was struck by this being Biden’s number one priority. “They are literally grasping for anything at this point in the midterm elections. We ought to make the American people’s priorities our priorities.” Pence inferred Americans care much more about the economy.

He confidently declared that Democrats will not maintain their majorities and that pro-life majorities are incoming in the house and senate and will make the case for life in every state.

Americans, he said, should fight for this cause with compassion and principle and that the majority of Americans support it, stating, “This is a nation that cherishes life.”

Hopefully Pence is right and it is not just conservatives that are pro-life, but many liberals also are or will be if presented with the arguments with “compassion and principle.”