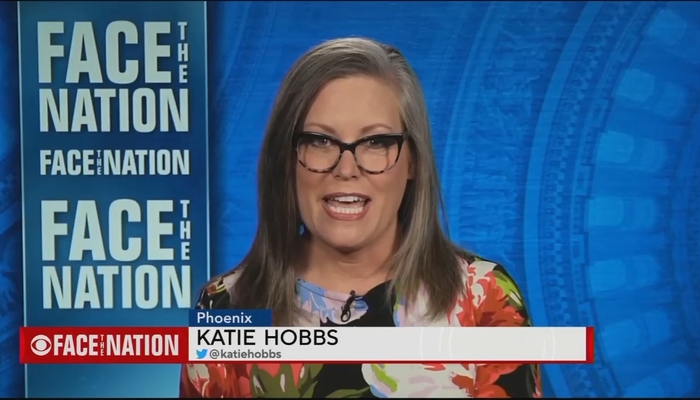 The video clips on Twitter reveal debate moderators across America slanting their questions against Republicans and tossing softballs to Democrats. That makes it more scandalous that some Democrats are running away from any debates. Even with the liberal tilt, they can’t hack it? The Democrat poster girl for debate avoidance is Katie Hobbs, who’s running for governor of Arizona. At least this is a pattern with Hobbs. She also avoided a debate with her opponent Marco Lopez in the Democrat primary. Was it white privilege?

On the October 16 State of the Union show on CNN, Dana Bash confronted Hobbs with a quote from political analyst Laurie Roberts in the Arizona Republic. “If Katie Hobbs loses, remember October 12, the day she ran away from confronting Kari Lake. Democrats in Arizona are known for snatching defeat from the jaws of victory, but Hobbs’ refusal to debate her opponent on Wednesday represents a new level of political malpractice.”

Hobbs could only claim “Kari Lake has made it clear time and time again that she’s not interested in having substantive, in-depth conversations about the issues that matter to Arizonans. She only wants a scenario where she can control the dialogue.”

Obviously, debates have a moderator to corral the candidates, but Hobbs puts no trust in liberal moderators.

Hobbs rejected the usual debate run with the Arizona Citizens Clean Elections Commission (CCEC) and Arizona PBS. Hobbs demanded separate interviews for the candidates instead, but the CCEC rejected it and instead scheduled a 30-minute TV interview with Lake on local PBS.

Then Hobbs announced she would be getting her own 30-minute PBS interview on October 18, infuriating the CCEC and the Republicans. Arizona PBS has been operated since 2014 through Arizona State University’s Walter Cronkite School of Journalism. How desperate do you have to be to not trust PBS and a school named for Cronkite, the liberal icon?

In some unintentional comedy, Arizona State president Michael Crow said Arizona PBS had to interview debate-skipping Hobbs because they have to be “fair and balanced in all things that we do.”

The CCEC announced that they organized a 30-minute interview for Lake on October 23 with AZTV7, an independent, locally owned television station. PBS claims it’s still open to a Lake interview, but she is refusing in protest of their indulgence of Hobbs.

When Hobbs came to ASU for her interview, PBS interviewer Ted Simons began with the debate question, and she claimed Lake “threw a tantrum” like a “high school bully,” showing she didn’t have the “temperament to lead.” At least Simons mildly suggested that confronting adversaries is part of leadership.

ASU was so protective of Hobbs that they encouraged remote classes after 3 pm because “we do not know what the onsite circumstances may be around the Cronkite building.” ASU police and a police dog were there for security.

Since Hobbs hates questions, it was only natural that she quickly left after the interview, taking a freight elevator to a secure parking garage. Reporters who watched the interview from a media room were not allowed to leave for several minutes! Democracy dies in darkness! This underlines the extreme protectiveness of ASU and Arizona PBS.

Cowardly Katie looks like a cartoon. How can she possibly be a governor of a state? Is she going to run from reporters every time they can gather around her? Will local and national reporters stop being Democrats just long enough to insist that she needs to take their questions? It’s laughable that the Media-Democrat Complex think they’re “saving democracy.”