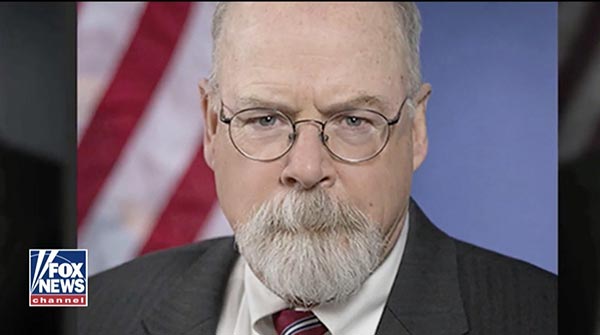 (Natural News)
Shortly before the untimely end of the Trump administration, then-Attorney General William Barr assigned a federal prosecutor known to be fair and meticulous to investigate the origins of the phony “Russiagate” counterintelligence probe into the 2016 campaign of the former president.

Not long after he began, John Durham discovered enough evidence to warrant criminal charges, and as such, in the weeks before Barr also left office, he named Durham as a “special counsel” so the incoming Biden regime would have a harder time getting rid of him.

Joe Biden still could have ordered his politicized attorney general lackey, Merrick Garland, to fire Durham, but it is likely both he and Biden knew there was no need to do so because Durham’s probe wasn’t going to result in any serious charges against major players.

And it turns out, that’s been the case.

Durham has managed to secure one guilty plea from a former FBI lawyer, Kevin Clinesmith, who admitted lying on an application to obtain a secret surveillance warrant from the FISA court to spy on Trump campaign adviser Carter Page. Clinesmith changed the application to hide the fact that Page was a well-established CIA asset, not a risk to national security, just so the deep state could continue justifying its spying on Trump’s campaign.

The result: Clinesmith got a slap on the wrist, did no jail time, and now has been given his law license back — because Washington, D.C., is a corrupt cesspool run by hyper-political Democrats who refuse to hold any of their own accountable.

That’s as close as Durham has gotten to any convictions, however. Two additional prosecutions — for lying to the FBI — have gotten nowhere because the Dem-friendly juries in D.C. refuse to do their duty and convict people who very clearly broke our laws, the latest being a Russian operative who provided nearly all of the false information contained in former British spy Christopher Steele’s fake “Trump-Russia dossier,” Igor Danchenko.

“Igor Danchenko, a key source of information in the discredited Steele Dossier, was found not guilty on all counts related to lying to the FBI about his relationship to Trump opposition research documents,” Zero Hedge reported on Wednesday. “Danchenko’s information comprised around 80% of the information contained in the infamous dossier assembled by former British spy Christopher Steele.”

And now that the investigation is effectively over without anyone in the corrupt FBI and Justice Dept. responsible for launching an investigation into a U.S. presidential campaign under false pretenses, the deep state’s operatives are moving to have Durham’s final — and damning — report from being made public as well.

Matthew Miller, an Obama administration public affairs hack for the DoJ, said that Garland should make the decision not to release Durham’s report — to effectively hide what’s in it from the American people who fund the government’s various agencies and institutions. At the same time, Miller attacked Durham, which is what the left-wing Marxists in the deep state always do.

“I think Merrick Garland will be under a lot of pressure from Republicans to release that report, but I have to say, this circumstance is very different from the Mueller investigation, where, obviously, the attorney general, Bill Barr, did release that report,” Miller told MSNBC.

“It’s different because in that case, the subject of that investigation could not be charged, and so it was appropriate for the department to make its findings public, so Congress could decide whether to impeach and convict the then-sitting president,” he said. “That is not the case here, so to release a report in this instance — given what we know about the way that Durham has behaved, some of his inappropriate public statements during this investigation, the poor judgments he has made in bringing these charges — to release a report publicly and let him have the final word I think probably unfairly tarnish some people at the FBI that we know he holds ill will to based on some of the things he said in this most recent trial.”

The American people have zero control over or influence on their own government.

Mark Ruffalo says Twitter ‘should be heavily regulated for misinformation,’ suggests government intervention if Elon Musk does not police the platform
MSNBC’s Joy Reid Lashes Out At GOP, Lies About Holocaust Book Bans
Elon Musk threatens to release Twitterâ€™s emails related to the suppression of the Hunter Biden laptop story
Thanksgiving horror: Family members arrive at relatives’ home for holiday gathering, discover husband had dismembered and disemboweled his wife, police say
OUT IN THE OPEN: UN and WEF admit to owning and controlling “science” and Big Tech