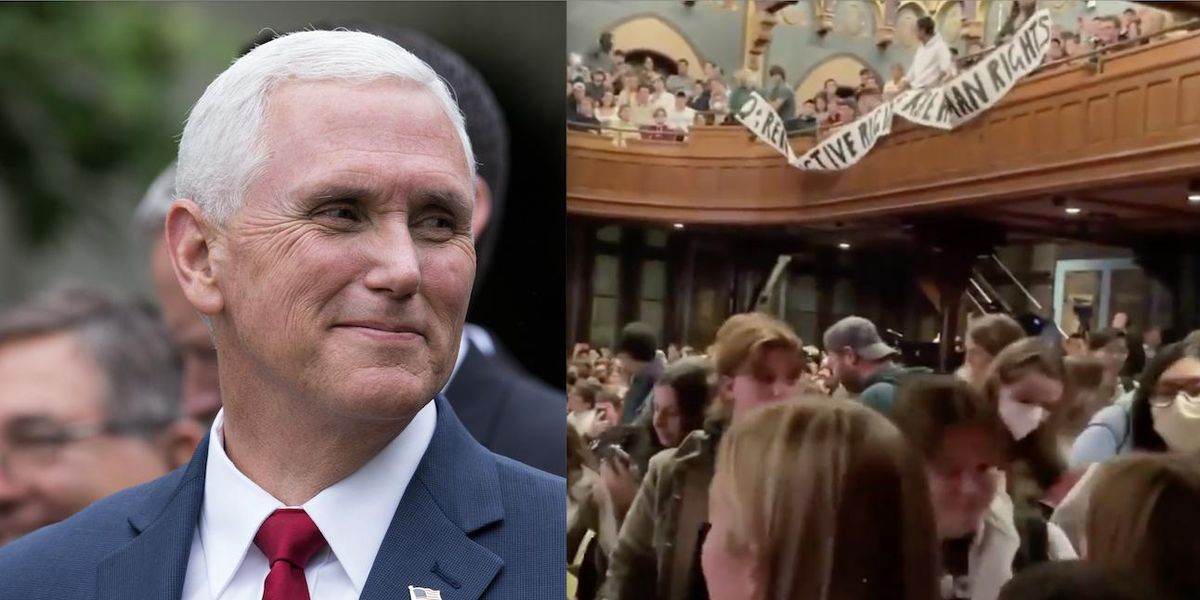 Video from Young America’s Foundation — the conservative group that hosted Pence’s speech — shows dozens of students walking out of the room while Pence speaks and other students in the venue’s balcony unfurling a banner reading “reproductive rights are human rights,” Fox News reported.

Pence had the perfect response to the walkout: “Seems to me that having served many years in Washington, leaders in this nation’s capital have never been more out of touch, more intent on imposing their agenda — or walking out on people that might have a different point of view.”

The crowd that remained in the venue clapped and cheered upon hearing that final zinger:

Better still, the walkout was a double win. YAF told Fox News the departing left-wing crowd made room for students who actually wanted to listen to Pence.

Fox News said a Pence representative didn’t immediately respond to the cable network’s request for comment. Pence did, however, give a shout-out to attendees in a Wednesday-night tweet:

u201cThank you @yaf and @GUPolitics! It was great to be at Georgetown tonight with so many great young Americans! ud83cuddfaud83cuddf8u201d

“Thank you @yaf and @GUPolitics!” he wrote. “It was great to be at Georgetown tonight with so many great young Americans!”

In his speech, Pence emphasized tolerance and called for the restoration of civil discourse, Fox News said.

“I really do believe you can say to somebody they’ve got bad ideas without saying they’re a bad person,” Pence told the audience, according to the cable network. “I hold the view and have for many years that democracy depends on heavy doses of civility.”

Pence — who many believe is considering a 2024 presidential run — was cagey when asked during a post-speech interview whether he’d support Donald Trump as president again in 2024, Fox News reported.

“Well, there might be somebody else I prefer more,” he
said with a smirk, according to the cable network.

“All my focus has been on the midterm elections, and it’ll stay that way for the next 20 days. But after that, we’ll be thinking about the future,” Pence added, Fox News said. “Ours and the nation’s. And I’ll keep you posted. OK?”

‘NOT FOR ME’: Univision’s Chevy Bolt Infomercial Spontaneously Combusts
Notre Dame University ‘unequivocally’ rejects professors’ claims that pro-lifers have promoted ‘lies’ about abortion
RIGGED: Deep State FBI held ‘weekly’ meetings with Big Tech to defeat Donald Trump in 2020
Joe Biden as He Honors U2 at White House Reception: “150 Albums Sold! Among the Most Ever!” (VIDEO)
PHARMACEUTICAL CRISIS: In Biden’s America, there are now 124 medications in short supply