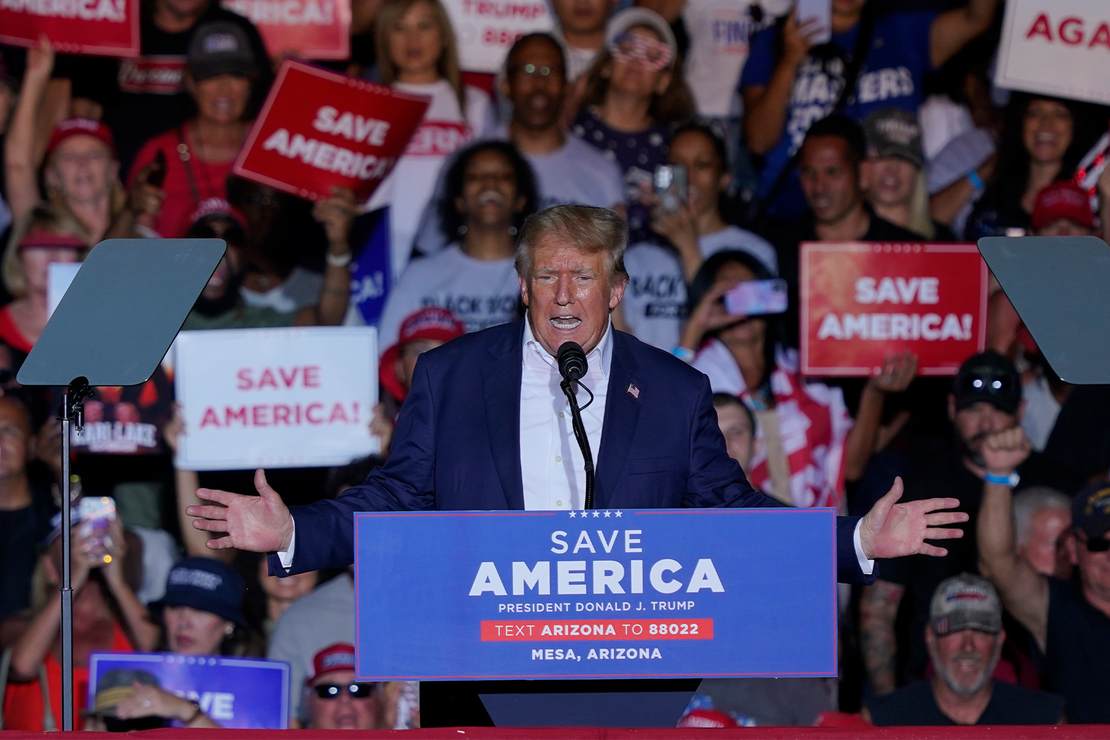 It’s almost inevitable that Trump will run for president again. He regularly hints at it, and frankly, after the disaster that Biden has created, it’s hard not to long for the days of mean tweets, low gas prices, inflation, and a strong economy. Putting Trump back in the Oval Office gets more attractive daily.

Truth be told, Trump’s comeback has been plotted ever since he left office. His 2024 candidacy hasn’t been so much a question of “if” but “when.” Of course, while few doubt his inevitable candidacy, one big question that we do have is who his running mate will be.

All we know is that it won’t be Mike Pence. Trump quickly soured on Mike Pence because he’s held onto the belief that his vice president had the power to stop the certification of the Electoral College when allegations of fraud in battleground states went uninvestigated. As outrageous as it was that these allegations were never properly investigated, Pence couldn’t do a thing about the certification of the Electoral College.

There’s been a lot of speculation about whom Trump might pick. Earlier this year, Trump’s former campaign manager and advisor Kellyanne Conway predicted that whoever he picks, it would be a woman. “I think if President Trump runs again in 2024 or whoever the [Republican] nominee is, it’s either going to be a woman if he decides not to run, or he’ll seriously consider selecting a woman as his running mate,” Conway predicted. “And not just a woman for woman’s sake because he’s never done that. A woman because he recognizes that we’re one-half of the country, more than one-half of the country, and more than one-half of the electorate, and we have to restore faith that women leaders in government can get the job done.”

And there are plenty of great potential Republican women candidates who would do a far better job than Kamala Harris. But some of the names that have been floated have not been very good predictions.

Earlier this year, sources in Trump’s inner circle said that a likely choice is Rep. Elise Stefanik (R-N.Y.). At the time, sources told CNN that Trump had been “surveying close friends and allies on what they think of Stefanik, one of several Republican women he is possibly eyeing for the potential VP slot, though he has not ruled out a few male contenders, too.”

A couple of other names have been floated recently.

Rich Lowry at National Review thinks that Arizona gubernatorial candidate Kari Lake would be a contender. “If she wins, and if Trump wins the nomination (a couple of big assumptions there), she checks a lot of boxes as a VP pick: a ‘stop the steal’ true-believer who, unlike Doug Mastriano and his ilk, would have demonstrated political viability; a governor from a swing state that Trump lost in 2020; a woman; a politician who has thoroughly absorbed the spirit of Trumpian politics as combat and theater; and a name that can generate big crowds.”

Lowry concludes that Lake would be “Trump’s Sarah Palin, except the match would be much more natural.”

“She has been unflaggingly loyal to Trump throughout,” Draper explained. “What is Trump concerned about most of all in a VP after the Mike Pence experience? Loyalty. […] He has every reason to expect that Greene would be by his side and would be his proximate warrior.”

This is true, but none of the aforementioned women would be great picks for Trump. Assuming Lake wins, she is much better off staying on as governor than running for higher office so soon. Lake is a phenomenal candidate, and, should she win, she has a bright future in the Republican Party, but she should serve at least one full term before considering higher office. Also, Lake might be more important in terms of helping to rebuild the party in Arizona, which has been trending blue/purple for several cycles.

After the countless times that Trump was betrayed during his first term, I can understand why he would want to pick someone whose loyalty he can depend on. But, as someone who was not on the Trump Train for most of 2016, there was something comforting about Trump’s selection of Mike Pence as his running mate that made it easier for me, a Trump skeptic, to vote for him.

Presidential nominees typically choose someone as their running mate to balance the ticket in some fashion: demographically, geographically, and even ideologically. Yes, things were better under Trump, but he’ll still have to appeal to independent voters to win in 2024, and he’ll need to pick someone who balances the ticket, and neither Stefanik, Lake, nor Greene does that effectively. I’m not sure who the best potential running mates are, but I don’t see any of these three benefiting the ticket.

Elon Musk says he would back Ron DeSantis for president in 2024
70-year-old Marine veteran fighting for his life after braving devastating rowhouse explosion to rescue strangers
Mike Pence: A Man of Integrity
I am thankful for the living God who — when we are suffering — moves toward us because of Christ
Univisión ridiculiza el mensaje de Trump a CPAC México sobre Dios, la familia y la patria