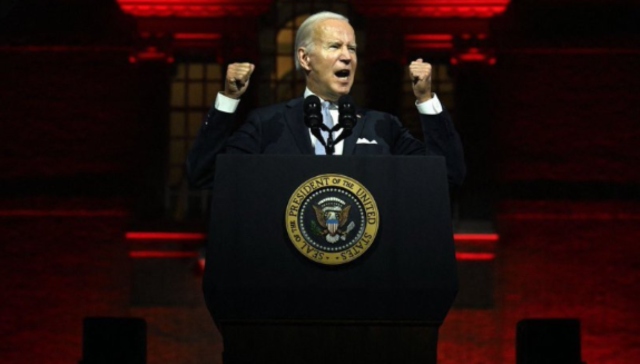 (Natural News)
President Joe Biden is trying his best to convince Americans that recession is avoidable – especially with the midterm elections so close.

But according to a model projection from Bloomberg Economics, the U.S. economy is effectively certain to enter a recession in the next 12 months. The probability models maintained by Bloomberg economists Anna Wong and Eliza Winger had earlier shown just a 65 percent chance of a recession over the coming 12 months.

The latest projection doesn’t bode well for Biden and the Democrats ahead of the November elections.

Biden has repeatedly said that the U.S. will avoid a recession and that the downturn would be “very slight.” The president is obviously trying desperately to reassure Americans that the economy is still on solid footing. It’s not.

The tightening financial conditions, which include persistent inflation and expectations of a hawkish Federal Reserve pressing ahead with rate hikes, are raising the risk of an economic contraction.

A separate survey of 42 economists also showed rising probability of a recession –  from 50 percent last month to 60 percent this October.

These forecasts are a sharp contrast to Biden’s positivity. He has focused on strong job growth as he campaigns to help Democrats win House and Senate majorities in the midterms.

Inflation, which has hovered near a four-decade high, has been a drag on the prospects of Democrats in an election where polls indicate that the economy is the voters’ top concern.

Biden still in denial despite dire numbers presented by experts

Despite the dire numbers presented by economic experts, Biden still insists that he does not anticipate the U.S. to enter a recession.

He noted that economists have been predicting a slowdown in the economy for months, but the recession has not yet occurred. “I don’t think there will be a recession. If it is, it will be a very slight recession,” he said in a recent interview with CNN‘s Jake Tapper. “It’s possible. I don’t anticipate it.”

This remark came just hours after the International Monetary Fund (IMF) forecasted a global economic slowdown and a tightening of monetary and financial conditions in the United States.

“In short, the worst is yet to come and, for many people, 2023 will feel like a recession,” the IMF said. (Related: Americans for Tax Reform president slams White House for attempting to redefine recession.)

The IMF noted that the high inflation, a slowdown in China and the ongoing war between Russia and Ukraine are contributing to the challenges in the global economy.

Meanwhile, Biden said he has no intention of meeting Russian President Vladimir Putin at the G20 summit in Indonesia next month, although he will consider a conversation depending on the topic.

Biden said he would speak with Putin if the latter approached him at the conference and said he wanted to talk about releasing professional basketball player Brittney Griner.

Visit Collapse.news for more information about the possibility of a recession in the United States.

Watch the video below to know why economic experts are warning of a global recession.

This video is from the NewsClips channel on Brighteon.com.

W.H. argues current recession isn’t ‘technically’ a recession, ‘it feels unique, because it is unique.’

THIS IS SERIOUS: Financial wizard Jamie Dimon predicts major recession coming to U.S. thanks to worsening economy under Biden.