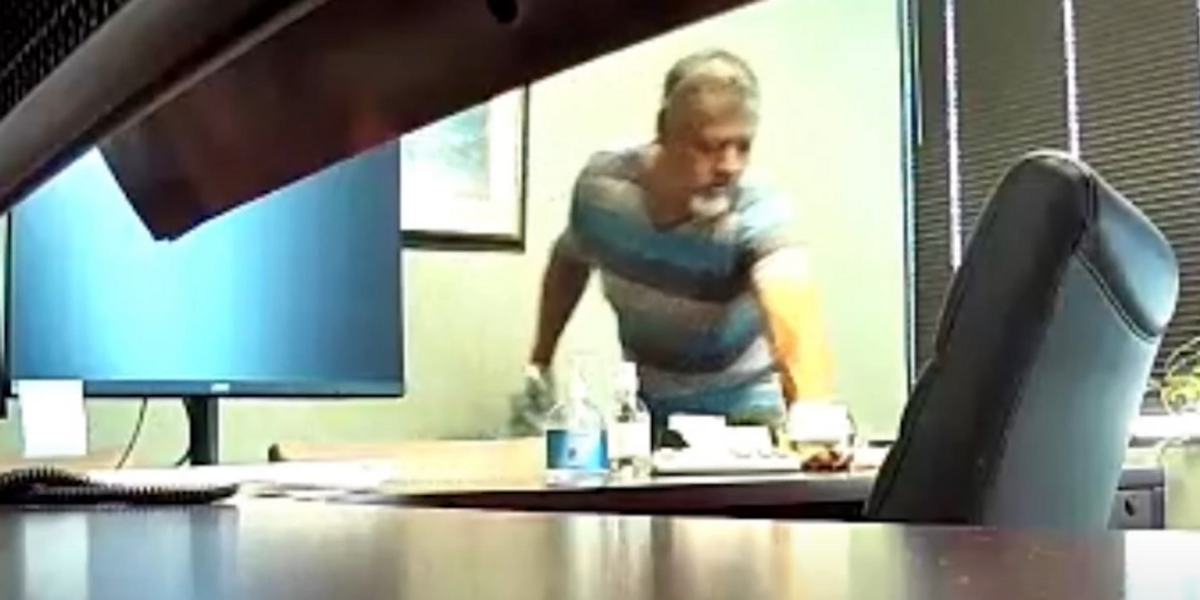 A Texas janitor is accused of urinating in a woman’s water bottle – which the victim claims caused her to contract an STD.

On Aug. 30, a female employee at a doctor’s office in Houston noticed that the water in the workplace’s 5-gallon dispenser had a “funny taste and smell to it.” The woman dumped the water after drinking the liquid that had a peculiar taste.

A few days later, the woman’s personal water bottle also had a nasty smell and taste.

The Houston Chronicle reported, “On Sept. 20, the woman handed a co-worker her water bottle after the co-worker offered to fill it with coffee. The co-worker removed the bottle’s lid and asked the woman why the water inside was yellow, the documents show.”

The co-worker smelled the liquid inside the bottle and concluded that it reeked of urine.

Another co-worker noticed that the water in her Smartwater was yellow and smelled like urine.

The woman spoke to a doctor in the building – who conducted a urinalysis test on the water. The liquid tested positive for urine, according to documents.

The office was not equipped with security cameras, so the victim purchased a small surveillance camera. On Sept. 26, she placed the hidden camera under her computer. She left a water bottle on her desk overnight.

The surveillance camera was turned on after a motion sensor detected movement in the office. The woman received an alert on her phone that the hidden camera began recording.

The woman caught the man committing the disturbing act a second time the next day.

The woman went to the Houston Police Department. She provided the police with a water bottle that had urine in it and the bottle that the man put his genitalia in.

On Sept. 30, the victim – who is a married mother of two – informed police that she had tested positive for a sexually transmitted disease that is incurable. Doctors also said the disease can be spread through bodily fluids and that it can weaken the immune system and, in some cases, can be life-threatening.

On Oct. 3, a warrant was issued for the arrest of Lucio Catarino Diaz – a 50-year-old janitor at the medical building. Two days later, Diaz was arrested.

Diaz confirmed to police that he put his penis in the woman’s bottle on two occasions because he “knew she would drink it the next day,” according to court documents.

Court documents said Diaz admitted to putting his penis inside water bottles and urinating in them for the past eight months. He allegedly did not know how many times he committed the disturbing act. He said that he did the bizarre crimes because it was a “sickness.”

Diaz tested positive for the same STD that the woman was infected with.

Diaz was charged with aggravated assault with a deadly weapon.

He was taken into custody and was being held by immigration officials. The Mexican national’s immigration and work status are “unclear.”