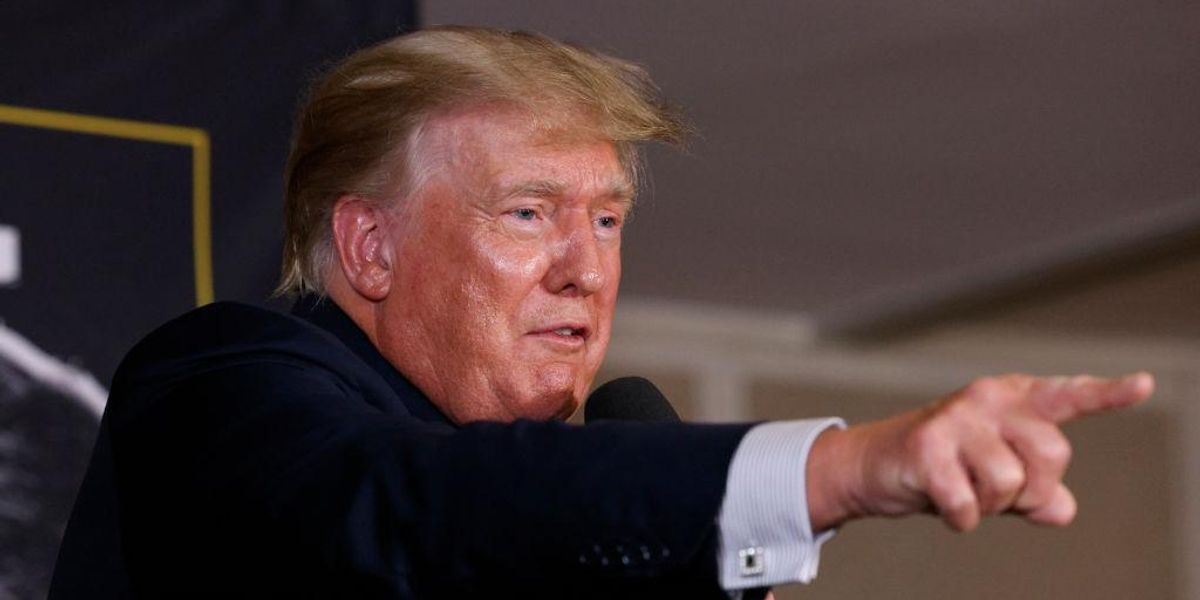 Former President Donald Trump said on Saturday that he will sue the Pulitzer Prize Board for awarding journalists who advanced the discredited “Russia Hoax” narrative as well as for doubling down on allegedly defamatory remarks. For over a year, Trump has insisted that the Pulitzer board revoke the prizes to the New York Times and the Washington Post because the awarded reporting “have become worthless and meaningless.”

At his “Save America” rally in Robstown, Texas, on Saturday, Trump split his attention between the future and the recent past.

Concerning the future, Trump indicated he would “probably” run again for president in 2024, stating, “In order to make our country successful, safe and glorious again, I will probably have to do it again.” He emphasized the need to focus first on the midterm elections and on securing a “historic victory for the Republican Party this November.”

Regarding the recent past, Trump underscored how those who covered so-called Russian interference in the 2016 presidential election should not be permitted to keep their prizes for national reporting.

Rather than on individual journalists, Trump honed his critique on the Pulitzer Prize Board, which recently refused to rescind the awards that had been conferred to reporters for pushing the “Russia Hoax.”

The awards in question went to the staffs of the New York Times and the Washington Post for what the Pulitzer Prize Board characterized as “deeply sourced, relentlessly reported coverage in the public interest that dramatically furthered the nation’s understanding of Russian interference in the 2016 presidential election and its connections to the Trump campaign, the President-elect’s transition team and his eventual administration.”

Whereas the liberal media was awarded for “wrong reporting,” advancing and amplifying spurious claims that Trump and his team had colluded with Russia, the former president noted that “other people should have gotten the Pulitzer Prize because, frankly, they got it right for years.”

Trump claimed that “they don’t do Pulitzer prizes” for those who, in his view, got it right, such as Fox News hosts Sean Hannity, Tucker Carlson, Jeanine Pirro, and Laura Ingraham.

Trump indicated that, in lieu of another request for rectification, he will now be “suing the Pulitzer organization to have those prizes taken back” within the next two weeks.

“By allowing these people that got Russia, Russia, Russia wrong [to get the award],” said Trump, “they’re actually libeling me because they’re saying they got it right and it turned out to be a hoax.”

u201cJUST IN: President Donald Trump has just announced tonight that he will be suing the Pulitzer organization in the next two weeks to take retract the Pulitzer Prizes from certain journalists who received it for reporting on the Russia Hoax ud83dudca5 nnEnemy of the people.u201d

After it received the Pulitzer in 2018, the New York Times celebrated itself for “changing the nation’s understanding of Russian interference in the 2016 election.”

The Washington Post similarly ran an article at the time, boasting that the “Post’s revelations about Russia, including contacts between Russian figures and President Trump’s associates and advisers, helped set the stage for the special counsel’s ongoing investigation of the administration.”

That investigation, which the Department of Justice said cost $32 million, ended with Special Counsel Robert Mueller finding no evidence of Russian collusion.

Even after the Steel dossier was discredited (admitted in the pages of the New York Times), the NYT and the Washington Post both doubled down, suggesting as late as spring 2022 that the Russian investigation was not undercut.

Trump has been asking the same question for years.

The Hill reported that last October, Trump wrote to Pulitzer’s interim administrator claiming that the award in national reporting, which had been given to the two liberal papers, was “based on false reporting of a non-existent link between the Kremlin and the Trump campaign.”

Facing similar demands from Trump and others, the Pulitzer board announced on July 18 that it had commissioned two independent reviews of the work for which prizes were awarded.

According to a statement issued by the board, the “separate reviews converged in their conclusions: that no passages or headlines, contentions or assertions in any of the winning submissions were discredited by facts that emerged subsequent to the conferral of the prizes.”

On Oct. 13, Trump’s attorneys Jeremy Bailie and R. Quincy Bird wrote to Marjorie Miller, the administrator of the Pulitzer Prize Board, concerning the board’s July statement. In the letter, Trump’s attorneys notified the board that “a defamatory statement pertaining to President Trump was and remains published on the Board’s website since July 18, 2022.”

The letter cautioned that “the Board, including its individual members, may be subject to suit and exposed to a judgment for damages, including punitive damages, for defamation,” demanding not only that the statement be taken down by Oct.18, but that “a full and fair correction, apology, or retraction issued.”

Additionally, Trump’s attorneys noted that “rescinding the 2018 Pulitzer Prizes in National Reporting from their current recipients would necessarily be part of any full and fair attempt to right the wrong caused by the Board’s conduct.”

The letter advanced the claim made by Trump on Saturday: “The New York Times and The Washington Post were and are two of the foremost propagators of the Russia Collusion Hoax” and that it was “obvious that the 2018 Pulitzer Pries were intended to endorse the two mainstream media organizations’ full, misleading body of work on the Russia Collusion Hoax.”

A hostile Pulitzer board

The Pulitzer Prize Board, 2017-2018, which conferred the awards for investigations into disproven Russian interference included a number of fierce Trump critics, such as Gail Collins, an opinion columnist at the New York Times.

Two years before determining whether reporting on so-called Russian interference as it pertained to Trump’s election and presidency were deserving of an award, Collins referred to the president as, “A dimwitted, meanspirited spawn embodying the nation’s worst flaws, failings and nightmares” and suggested prior to the 2016 election that undecideds should vote for Clinton.

Eugene Robinson, the Pulitzer Prize Board’s chair in 2018, is a columnist and associate editor at the Washington Post, which also happened to receive the award. He also happens to be an outspoken critic of the former president.

In the year he was on the board, Robinson accused Trump of “speaking the language of white supremacy,” telling his Twitter followers to, “Get mad, and then get even: Vote against his enablers in November.”

The chair of the Pulitzer Prize Board also accused Trump of being a “Putin fanboy.”

Don Lemon stuns CNN co-hosts when he rejects feminist narrative on soccer athletes’ earnings
Joe Biden as He Honors U2 at White House Reception: “150 Albums Sold! Among the Most Ever!” (VIDEO)
The Fringe With Megan Fox, Episode 110: Shocking New Details of Government Incompetence in Ohio Rape Case
DeSantis Continues to Look Like the Safer Bet in 2024
Janitors’ union called a strike outside Twitter, so Elon Musk cancelled its contract and fired the janitors