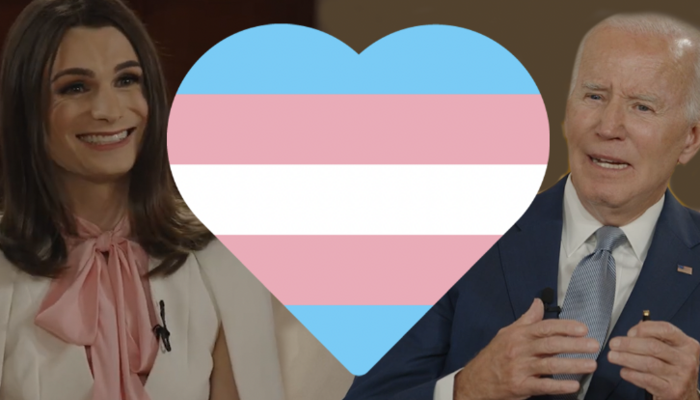 Would Joe Biden invite a pro-gun, pro-life, heterosexual, Christian to the White House? As if. But a trannie? Put out the welcome mat! Biden sat down with six “change-makers” on issues that young people supposedly care about for a “NowThis” interview. One of his special guests was a biological male pretending to be a woman, there to talk about how young people need to vote in favor of transgender rights.

Dylan Mulvaney became famous this past year after documenting his transgender journey on the popular app for young people, TikTok. Mulvaney was at day 221 of “girlhood” when he met with Biden about struggles as a transgender person and backlash he faced in the political climate of America today.

In the interview Mulvaney asked Biden about his plans and beliefs regarding transgender people in America.

“Mr. President, this is my 221st day of publicly transitioning,” Mulvaney began.

Yeah, not sure God is that down with it, Joe.

Mulvaney asked Biden’s take on states that “ban gender-affirming healthcare.” Biden replied that he didn’t think any state or anybody should be able to ban so-called healthcare “as a moral question and as a legal question.”

Wait a minute … doesn’t Biden regularly refer to himself as a “devout Catholic?” If so, does he read the Holy Bible where in it’s first chapter it says that God created people in male and female?(Genesis 1:27) Perhaps he didn’t read that part.

Anyways, back to Biden’s answer.

Hmm, would he say the same if it were for children? I wouldn’t be surprised if he did given the fact that he hasn’t done anything to stop the indoctrination, exploitation, grooming, and mutilation of children that goes on daily in this country that he’s supposed to be leading.

Mulvaney’s next question asked about how Democratic leaders can do better than Republicans in regards to trans advocacy.

I think that it’s really important that we continue to speak out about the basic fundamental rights of all human beings. And the idea, the idea that what’s going on, you know, in some states, I won’t get into the politics of it but, in some states, it’s just, it’s outrageous and I think it’s immoral. The trans part’s not immoral but what they’re trying to do to trans persons is immoral.

OK, rewind the tape. Biden just said that we need to speak out about basic fundamental rights of all human beings. That’s really ironic coming from the man who is in active support of denying the MOST basic human right to the most vulnerable population in our society, LIFE! Biden has pushed for countless laws, talking points and ideas regarding unlimited access to prohibiting innocent babies from receiving the most basic human right but is a huge advocate of trans people getting whatever they want.

Speaking of kids, Mulvaney’s final question asked Biden about advice he has for parents of transgender youth.

Biden suggested that parents not “be afraid” of their kids becoming transgender. “Just because it’s different, there’s nothing to be fearful about,” he said.

Nothing to be fearful about, huh? Go ahead folks and get your little girls boobs chopped off, put your six-year-old on puberty blockers, and feel free to help your son tuck his balls up so there’s no bulge in his dresses.

Nothing to be fearful of whatsoever.

The sad reality is that these are the kind of people Biden loves — his base. The people who will encourage more and more young people to vote for him and his social justice warrior gang and Mulvaney was just a sick prop in helping accomplish that.