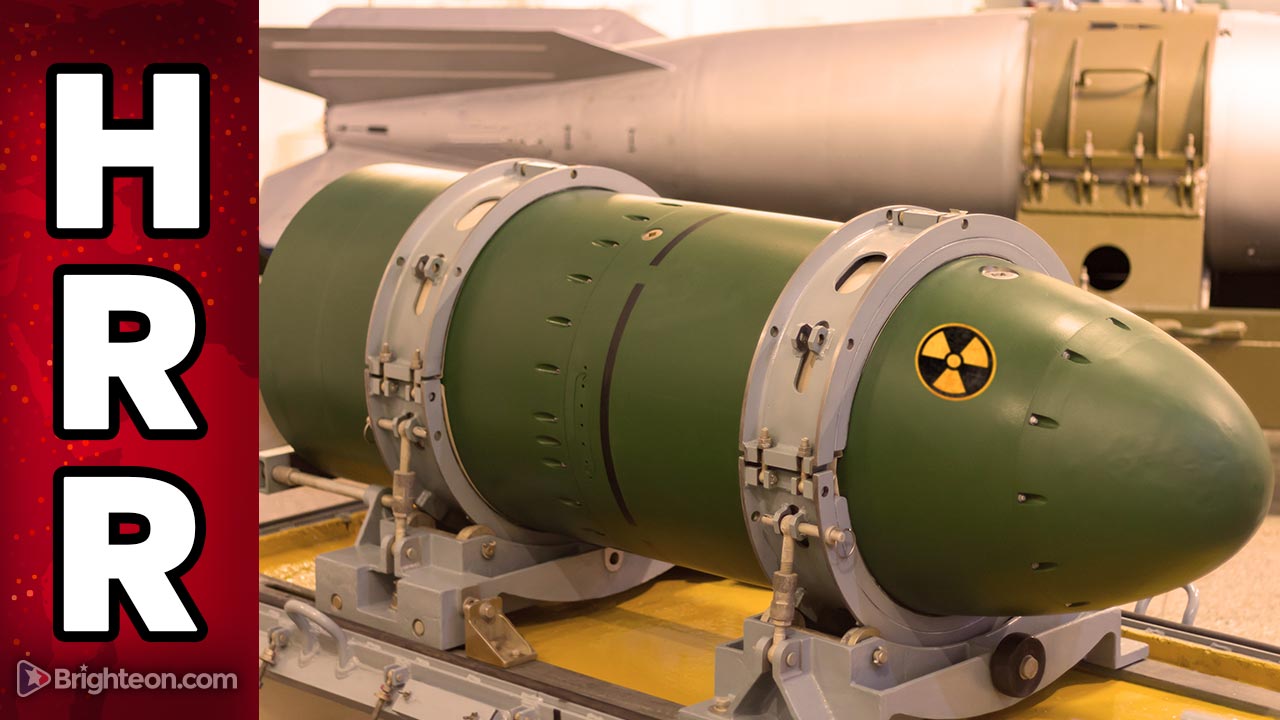 (Natural News)
A dirty bomb has reportedly been planted in Ukraine and is about to be donated by Ukrainian forces in order to blame Russia and justify a USA / NATO escalation into World War III. That’s the warning from Russia’s Defense Minister Sergei Shoigu, who has reportedly been making a series of calls to leaders of western nations to warn them of this false flag plot. As Mac Slavo writes from SHTFplan.com:

Once this radiological attack is initiated, it would of course provide a narrative to the dishonest western press to call for an escalated NATO attack on Russia. Knowing this attack is coming, Russia would be forced into a position of initiating a first strike pre-emptive retaliation, resulting in Russia potentially nuking major cities across the U.S. and Europe. This appears to be the goal of the Barack Obama / Susan Rice / Victoria Nuland / Joe Biden criminal cabal, which clearly wants to escalate this conflict into a global nuclear war so that America is destroyed, covering their tracks for decades of financial looting, kickbacks, bribery, election rigging and other forms of corruption.

Russia knows all this and doesn’t want this to escalate into a global nuclear conflict. That’s why they are sounding the alarm.

“The Defense Secretary refuted these claims and cautioned that such allegations should not be used as a pretext for greater escalation,” the ministry said.

Thus, Britain is claiming that when Russia is trying to de-escalate the situation by warning about a false flag dirty bomb, that warning is itself an escalation. France seems to recognize the danger in all this, as reported by CNBC:

The French Ministry of the Armed Forces said that Shoigu told his counterpart, Sebastien Lecornu, that the situation in Ukraine was rapidly worsening and “trending towards uncontrollable escalation.”

Thus, Russia finds itself trapped in a western-engineered escalation toward global thermonuclear war.

As I point out in today’s Situation Update podcast below, if the USA and Western Europe go to war with Russia, they will lose that war. Why? Because of deindustrialization.

The vast majority of metals smelting operations in Europe have already been shut down due to high energy prices. Aluminum operations are down more than 70%, and just this weekend, the largest steel manufacturer in the world — ArcelorMittal in Germany — is warning it will have to shut down for the same reason.

Reiner Blaschek, the CEO of ArcelorMittal Germany, warns that the German wing of the company can no longer compete due to soaring energy costs… Gas and electricity prices, which have soared in recent months due to sanctions and Russia’s decision to cut gas flows, have left many industrial companies with input costs too high to remain profitable.

Without steel, you cannot manufacture military equipment. Not even artillery rounds.

No steel = no capacity to fight war, in other words.

The United States has offshored most of its own steel manufacturing to other countries, leaving very little domestic production capability. As a result, even if the U.S. has funding to produce more military equipment, it still depends on steel and rare earth minerals from China and other countries. The F-35 production run, notoriously, was recently shut down by the Pentagon due to dependence on a rare earth mineral from China.

Furthermore, the culture of America has been transformed into an entitlement “snowflakian” work ethic, where most younger Americans don’t have any real work ethic and refuse to work in weapons factories altogether. Labor shortages mean that U.S. based weapons manufacturers can’t even find the personnel to keep their factories running.

Recently, when Joe Biden promised more HIMARS artillery systems to Ukraine, very few people realized that those HIMARS systems have to be manufactured from scratch and won’t be delivered until 2025 at the earliest.

Thus, Joe Biden is promising weapons that don’t exist, and pretending that printing money will somehow automatically translate into weapon systems magically appearing out of thin air. But reality doesn’t work that way. You actually need steel and labor and energy to produce weapons.

Europe has no affordable energy due to the economic sanctions against Russia and the destruction of the Nord Stream pipeline by U.S. forces. Thus, Europe has near-zero capacity to manufacture weapons of war. And the U.S. has no reliable labor supply, nor a sufficient weapons manufacturing infrastructure to fight a real war with Russia. With over one million artillery rounds already shipped to Ukraine so far this year, America’s own munitions stockpiles are red-lining. There’s almost nothing left, and there are no factories churning out a supply that would be sufficient to fight a world war.

Meanwhile, Russia has its own domestic supply chain, lots of steel and cheap energy galore

While Europe and the USA can barely manufacture weapons, ammunition or aircraft, Russia has all the natural resources necessary to wage an industrial supply chain of tanks, aircraft, diesel fuel, ammunition, rockets, ICBMs, nuclear warheads and everything else you might imagine. Russia has its own domestic supply chain to produce iron ore and steel, for example, and it has all the cheap energy to do so in an economical fashion that’s achieved at a fraction of the production cost of western nations.

Russia, in other words, can continue to build tanks, artillery, aircraft, rockets, nuclear warheads, battle gear, firearms, self-propelled guns and everything else needed to wage a kinetic war, and they can fund it all with record revenues from sales of oil, fertilizer, natural gas, diesel fuel, aluminum, copper, gold, wheat and other communities, all readily purchased by countries like China, India, Turkey, Iran and many more. Russia is raking in record profits due to the (failed) economic sanctions of the West, meaning Russia now has both excess revenues and its own domestic industrial supply chain to keep building weapons of war.

The entire British Army likely won’t last two weeks in a war with Russia. And the 101st Airborne — as much as the men and women in uniform are loyal and courageous — just isn’t equipped with the heavy gear required to fight and win a land war with Russia. You can’t beat Russia in a land war by using light infantry.

Furthermore, Pentagon standards have been watered down to appease the “woke” crowd, and virtually none of the younger soldiers in the 101st have ever seen actual combat. Even those who served in Afghanistan (in other branches or divisions) have never experienced combat when you don’t have air superiority.

On top of that, the Screaming Eagles (the 101st) are only at 60% strength due to difficulty in recruiting new soldiers. The Airborne Division isn’t even at the strength it was in Desert Storm, and the Iraqis didn’t have Russia’s artillery, tanks, Iskanders or air defense systems.

Thus, it seems likely that the 101st Airborne, should it be sent to engage Russia in a ground war in Ukraine, will be soundly defeated by veteran Russian forces that are now battle-hardened and extremely well equipped due to Russia’s geographical proximity, rail systems, industrial base and anti-air defense systems (S-400, S-500). If the 101st is thrust into a ground war with Russia, America should prepare to see a steady stream of flag-draped coffins arriving on military bases as casualties mount up. No doubt the western press will censor any images of such coffins and try to pretend that soldiers somehow aren’t dying in Ukraine, just as they are currently pretending nobody is dying from vaccines (even as they drop dead by the day).

Furthermore, NATO has no effective air defenses against Russia’s missiles or drones. Russia’s hypersonic missiles (and even subsonic missiles) simply cannot be stopped by NATO defenses, a fact that should be obvious from all the successful missile strikes across Ukraine this year.

The bottom line? If there’s anyone who is desperate enough to use nukes in this war, it’s NATO or the USA for the simple reason that they don’t have any other option. That’s probably why NATO forces are attempting to run a dirty bomb false flag and push this war into the nuclear realm as quickly as possible.

The problem, of course, is that billions of people could die from the resulting nuclear apocalypse, famine and collapse.

Perhaps that’s exactly what they want.

– Russia warns NATO / Ukraine has planted dirty bomb and intends to detonate
– Radiological event would be used to justify USA attack on Russia
– War would dramatically escalate, likely to nuclear conflict, overnight
– 101st Airborne has been deployed to Poland, near Ukraine border
– Today’s young, green troops have NO IDEA what real war is like
– US military standards have been watered down for the snowflake generation
– Largest steel plants in the world shut down in Germany
– Western Europe has virtually no STEEL production remaining
– Steel is required to build weapons of war such as tanks, artillery rounds
– USA and Europe have virtually no INDUSTRIAL means to supply a war
– Russia has its own domestic supply chain, manufacturing, cheap energy, steel, etc.
– There is NO QUESTION that NATO and the USA would be DEFEATED by Russia in a Ukraine war
– CDC director Walensky has covid again, even after all vax shots and boosters
– Sit down, Wilson!
– Interview with Trevor Loudon

NewsBusters Podcast: Soros and the Media-Manipulating Billionaires
Ruhle, Lefty Journo Panic Over Rise of Authoritarianism in US
The GOP Must Embrace Early Voting in Order to Destroy It
Texas girl, 7, who went missing is found dead; FedEx driver arrested for murder, kidnapping
Roger Stone Reinstated On Twitter – Hopefully Gateway Pundit Is Next!