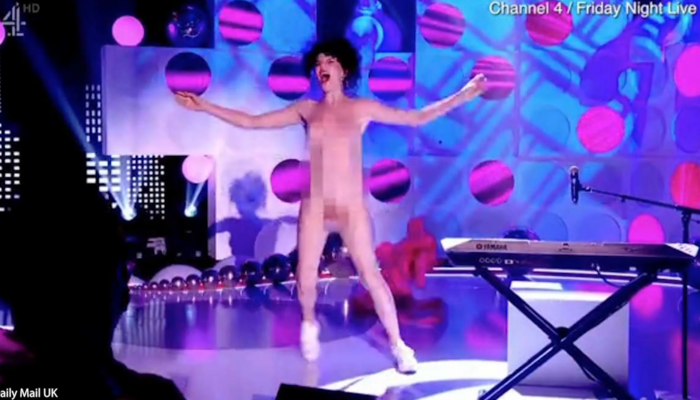 We live in a stupid time.

Transgender singer Jordan Gray stripped naked live on BBC Channel 4 on Friday, October 21. Gray then proceeded to play the piano with his — er, her — genitalia.

Jordan Gray goes by the name “Comic” and is biologically a male. Gray was supposedly asked to join Friday Night live for a one-off return of Friday Night Live as part of the show’s 40th birthday celebration, Daily Mail UK reported.

Gray sang an original song with lamenting his victimhood for being born in the wrong body.

Here are some of the lyrics if you don’t want to watch the video (I wouldn’t blame you if that were the case).

I look out in the faces in this room, and wish that I could crawl back in the womb.

And start again, against God’s plans, with different glands and smaller hands.

I wish the world could finally understand: I’m more than just a female Russell Brand.

Just  before the strip down, Gray hedged his next action by telling the audience, “You know the best thing about live TV? I can do stupid stuff like this!”

Gray then stepped to the side of the piano, gave a 1, 2, 3 countdown and ripped off his fuchsia pantsuit in one fell swoop exposing his entire, very male body (with boobs though … confusing, I know).

Though I didn’t think matters could get any worse, Gray then returned to the piano to play the keys, not just with “her” hands but with her penis as well.

Keep in mind, Channel 4 is state-run. That means that state taxes funded the program.

Gray supposedly planned to strip naked for the show. A couple of hours before his performance, he tweeted “tonight we make history” with a lovely flier featuring ribbons covering his boobs and a microphone covering his shlong.

Well, he certainly did make history. History that I hope NEVER repeats itself.

I don’t know what the hell happened to the world where behavior like this not only became accepted but celebrated but I don’t like it.

‘The dinner tables turned’: PETA posts cartoon of turkey family preparing to eat a human
New study claims that ‘fear mongering and misinformation’ may be responsible for adverse effects attributed to vaccines
CNN analyst declares that freedom of speech is ‘nonsense,’ claims Elon Musk’s new Twitter empowers Vladimir Putin and is ‘destructive to American national security’
If mRNA is now being found in breast milk, then covid “vaccine” safety claims are lies
What Biden’s Retreat on the Rail Strike Tells Us