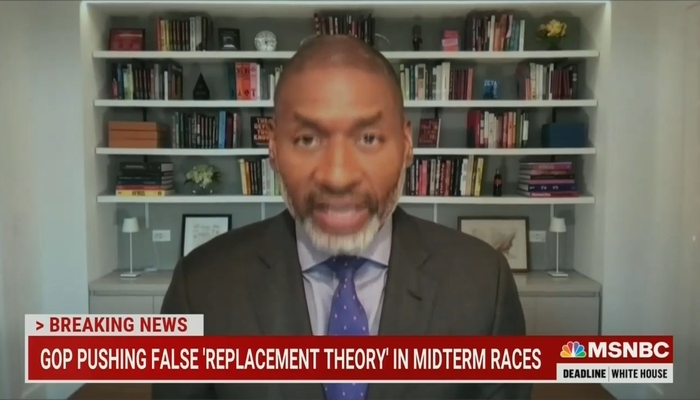 This past week, MSNBC analyst and New York Times columnist Charles Blow made a remarkable declaration that “white people will be replaced” but still accused Republicans of “racism” as he responded to Ohio Republican Senate nominee J.D. Vance charging that Democrats support illegal immigration in the hopes it will mean new voters for them.

Nicolle Wallace set up the second hour of Deadline: White House by playing a clip of Ohio Democratic Senate nominee Tim Ryan accusing Vance of promoting a “racist conspiracy theory” against Democrats, and then played a clip of Vance on Fox accusing Democrats of supporting illegal immigration for political gain.

After calling his claim a “racist and extremely divisive false conspiracy theory,” the MSNBC host then complained about recent ads Republicans have run attacking Democrats over border security.

She did not mention that polling has shown that as many as 48 percent of Americans, not all of them Republicans, believe politicians have deliberately tried to change the country’s demographics for political gain using immigration policy.

After Blow got his chance to speak, he proclaimed that the white population will, in fact, be “replaced” in the future:

And I think it’s always important whenever I talk about great replacement theory to remind people that there is a great replacement theory, but there is also a simple replacement fact, right? That the country is becoming more nonwhite. That’s not racist to say that. I say that all the time because it’s a fact. It is what the statistics show us. There will come a time when white people will be replaced as a majority of the people in the country. That’s not racist to say that — that’s just a fact.

He went on to suggest that Republicans are exhibiting “the very definition of racism” if they accuse Democrats of trying to orchestrate demographic changes deliberately.

Not only has it been pointed out that politicians, journalists, and other liberals frequently have cheerfully predicted that demographic changes will some day bring Democrats to dominate the country, there have also been times when journalists have admitted directly that Democrats are, in fact, motivated by such considerations to support illegal immigration as a source of new voters.

Back in 2002, during a discussion of the book, The Emerging Democratic Majority,  MSNBC host and former Democrat activist Chris Matthews delivered a gem as he admitted his party exploits immigrants for political gain. Based on the Nexis transcript, from the November 12, 2002, Hardball, Matthews asserted:

…one thing they love to do is get the most recent immigrant group in here, scare the hell out of them, tell them they need the Democrats as their protectors and milk them for every vote they can get from them. That’s what Democrats do. They have always done that, right?

Some politicians look at immigration demonstrators and see future voters. Democrats see Latinos as the key to an emerging Democratic majority. All the Democrats running for President favor immigration reform that includes a path to citizenship.

In recent years, publications like The Atlantic and Politico have also made similar links, as have Democrats themselves.

Given the hostility that liberals and Democrats appearing on cable news openly show toward whites, it is no surprise that so many Americans believe they deliberately try to import voters for their own benefit. As can be seen below, the liberal media frequently tolerate hostility to whites as normal commentary:

This episode of MSNBC’s Deadline: White House was sponsored in part by BMW and Sleep Number. Their contact information is linked.

NICOLLE WALLACE: And a nerve was struck indeed. Hi again, everyone. It’s 5:00 in New York. A fiery moment at last night’s debate for the Senate race in Ohio, a key race in determining whether Democrats will be able to hold on to control of the U.S. Senate for the next two years. Democratic candidate Tim Ryan calling out his opponent, J.D. Vance’s previous comments supporting and amplifying the conspiracy theory that Democrats seek to replace white voters through their immigration policies. Comments just like this.

J.D. VANCE, OHIO REPUBLICAN SENATE NOMINEE (FROM FNC’S TUCKER CARLSON TONIGHT): Democrat politicians who have decided that they can’t win reelection in 2022 unless they bring in a large number of new voters to replace the new voters that are already here. That’s what this is all about. We have an invasion in this country because very powerful people get richer and more powerful because of it. It’s not bad policy, it’s evil, and we need to call it that.

WALLACE: Immigration is evil. They seek to replace you. That was J.D. Vance. I don’t know who showed up at the debate. But Vance is just one of many in the Republican Party who are embracing this racist and extremely divisive false conspiracy theory. At a rally just last week, rising star in the GOP, Marjorie Taylor Greene, who we’ve been talking about said this, quote: “Joe Biden’s 5 million illegal aliens are on the verge of replacing you, replacing your jobs and replacing your kids in school,” end quote.

Viewers of playoff baseball games have recently been subjected to some particularly horrific and reprehensible new advertisements so racist they’ve drawn parallels to the Willie Horton ad of 1988.

CHARLES BLOW (MSNBC POLITICAL ANALYST/NYT COLUMNIST): I’m still stuck on this great replacement theory thing because I think it is symptomatic of where the Republican Party is right now. They’re basically running as a massive backlash to what has occurred in America in the last two or three years. This is everything from, you know, taking out black history in schools, great replacement theories, all as a massive backlash to what they saw which was kind of a racial solidarity in the weeks and the months following the death of George Floyd, the taking down of statues, which, in a lot of people’s minds, was emblematic of immigration. And so that is the framework under which all of this seems to me to be happening.

And I think it’s always important whenever I talk about great replacement theory to remind people that there is a great replacement theory, but there is also a simple replacement fact, right? That the country is becoming more nonwhite. That’s not racist to say that. I say that all the time because it’s a fact. It is what the statistics show us. There will come a time when white people will be replaced as a majority of the people in the country. That’s not racist to say that — that’s just a fact.

The question becomes: Why are you so upset about that? And why are you blaming that on elites or on Jewish people and on a conspiracy theory? Because, in fact, it is just about birth rates and death rates, and, yes, immigration does play a role in that.

You have to interrogate whether or not this basically racial fact about replacement, why does that make you so upset? Do you truly believe that people are people and they will do — some people will be good and some will be bad, and so there’s no real difference regardless of what the racial makeup of the country is. If you really believe in egalitarianism, that’s how you will respond to that. If you believe that the only true America is a majority white America, you will respond in a way a lot of these people are responding, which is, in fact, the very definition of racism.

James Woods to sue DNC over collusion with Twitter to censor Americans’ speech: ‘Scratch a liberal, and you will find a fascist every time’
‘Pelosi in the House’ Marks New Low for Media Bias
Unsolved mysteries: 7 Deep-State SECRETS Biden wants buried
‘The Fedcoin is HERE’: Glenn Beck reveals what the Fed was up to while YOU weren’t watching
Is the GOP Underestimating Joe Biden?