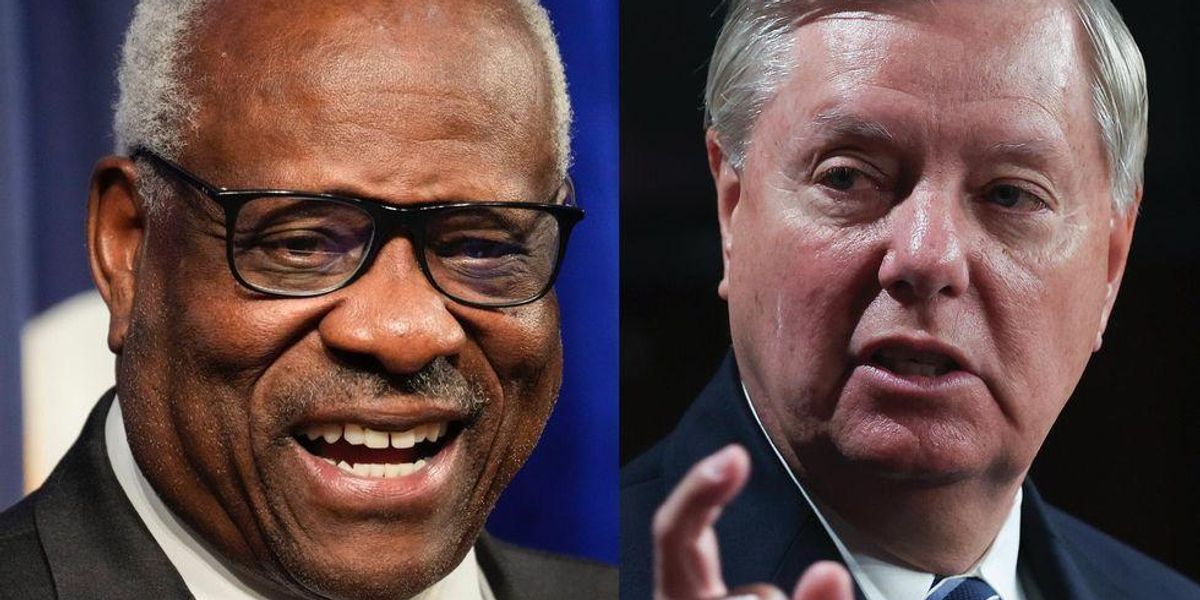 Supreme Court Justice Clarence Thomas halted an order for Republican Sen. Lindsey Graham of South Carolina to testify about the 2020 election before a Georgia grand jury, and many on the left were outraged.

Thomas has jurisdiction over appeals from Georgia and sided with Graham. While the order does halt the testimony, it only does so temporarily so that the full court can consider the appeal.

Graham argued that the calls he made to Georgia election officials were protected under the speech and debate clause of the Constitution. The 11th Circuit Court of Appeals ruled against that argument and ordered Graham to testify before the Georgia grand jury.

Many on the left accused Thomas of being biased based on reports that didn’t make it clear it was simply a temporary halt to the testimony.

“Clarence Thomas must be impeached and REMOVED from the US Supreme Court!!” tweeted Muslim comedian Dean Obeidallah.

“Clarence Thomas needs to be arrested. This will effectively remove him from the Supreme Court and bypass the impeachment procedure, allowing Biden to nominate his replacement,” read one reply from a commenter who identified as a gay activist.

“Clarence Thomas is a corrupt hack and I’m so f***ing tired of corrupt hacks f***ing everything up for the rest of us,” read one popular tweet.

“Clarence Thomas is a corrupt son of a b**** and shouldn’t be anywhere near the Supreme Court,” read another popular tweet.

“The Supreme Court is a joke,” responded Rex Chapman. “He needs to f***ing recuse himself. This is f***ing bullshit.”

Much of the criticism centered around Thomas’ wife, Ginni Thomas, who sent numerous text messages to Mark Meadows, the White House chief of staff under Trump, about overturning the official results of the 2020 presidential election. She has said that she attended the Jan. 6 demonstration at the Capitol but that she left early because it was cold.

Here’s more about the decision from Thomas:

Roger Stone Reinstated On Twitter – Hopefully Gateway Pundit Is Next!
Here’s What Happened in Georgia During the Runoff
NBC Fluffs Fauci in Interview: He’s Not Afraid to ‘Return to Masking’
NEW: Tara Reade Asks GOP House to Investigate Her Claims Joe Biden Sexually Assaulted Her in 1993
Masked robbers face no resistance, easily steal $35,000 in products from crowded Apple Store. One crook reportedly threatened violence against anyone trying to stop them.