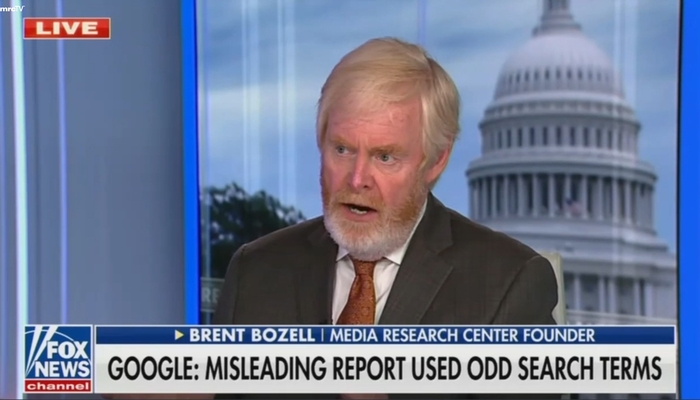 Host John Roberts pointed out a key finding of the MRC report: “[MRC’s] analysis of twelve races shows that Republican websites in ten of those twelve races resulted in significantly fewer search results on Google.”

Bozell then explained that in seven of the 12 Senate racesthat MRC analyzed, “the Republicans had been pushed to page two.”

Google controls 92.4 percent of internet searches worldwide, yet less than 1 percent of Google searchers click beyond the first page of search results, Bozell noted. This means that most people who use Google to search for the same Republican candidates included in MRC’s research will not find the candidates’ campaign websites.

“If you are somebody searching that Republican, that person doesn’t exist” because Google suppresses them, Bozell said. “For all intents and purposes, the Republican candidate is a non-person.”

But even when Roberts and his colleagues put in more basic Google searches comprising just the state, the Republican candidate’s last name and the year, “in five of those cases,” the Democrat appeared in search results, but the Republican did not, Roberts noted.

“So, it’s not just the way that [MRC is] searching” that’s bringing up skewed search results, Roberts said.

The Republican National Committee on Friday filed a lawsuit against Google for sending almost all GOP political fundraising emails to Gmail spam boxes at the end of the month, Bozell noted.

“Google has had an agenda against Republicans, against Donald Trump, going back to 2016,” Bozell said. “It’s been proven time and again. They have a liability protection. It needs to be addressed.”

Bozell noted that, in addition to Google, Twitter and Facebook are biased against conservatives. He cited their censorship of the Hunter Biden laptop story just 2 1/2 weeks before the 2020 presidential election.

Had Big Tech allowed more people to be informed about the Hunter Biden story, 9.4 percent of Joe Biden’s voters would have abandoned him, according to an MRC poll completed in November 2020.

‘Don’t make me kill you — because I will’: Military vet holds armed police chase suspect at gunpoint until cops arrive
Breaking: Appeals court rules against Trump, allows DOJ to restart investigation of documents seized at Mar-a-Lago
SECRET CDC REPORT: Since the launch of Operation Warp Speed, at least 1.1 million Americans have “died suddenly”
Ex-cop who allegedly killed man on mobility scooter to have manslaughter charge reconsidered by grand jury
Breaking: Michael Avenatti sentenced to 14 years in prison for wire and tax fraud