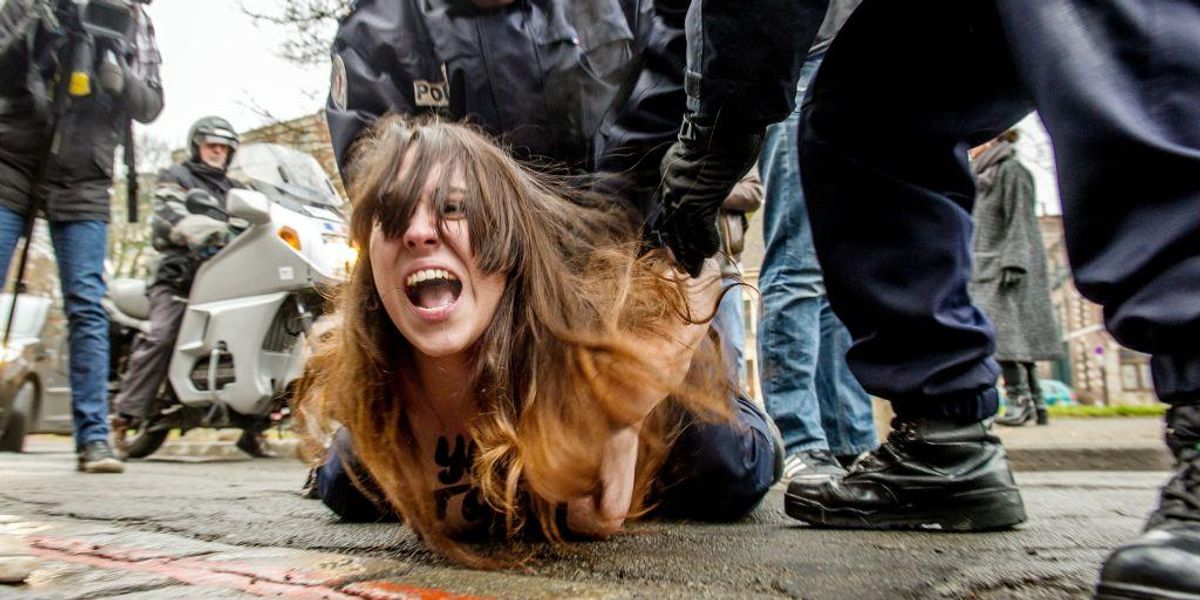 A European “human rights” court has ruled that a deranged and topless feminist’s Christmastime enactment of a simulated abortion of Jesus Christ on a Catholic altar constituted a protected “performance,” claiming it was not “insulting or hateful.” In addition to excusing the hateful, anti-Christian demonstration, the court ordered that France pay nearly $10,000 to the desecrator.

The Christian Post reported that in Dec. 2013, a pro-abortion zealot once affiliated with the extremist Ukrainian group FEMEN entered La Madeleine Catholic church in Paris topless and covered in eugenicist slogans while parishioners rehearsed Christmas carols.

Eloïse Bouton, the offender, wore a blue veil in mockery of the Virgin Mary and a crown of thorns in mockery of Christ and carried with her pieces of bloody ox liver. She mounted the altar and pretended to execute an abortion, subsequently implying the animal organs were parts of a murdered baby. After defacing the front of the place of worship, Bouton proceeded to urinate for all to see.

FEMEN posted an image to Twitter depicting Bouton on the altar along with the caption, “CHRISTMAS IS CANCELLED from the Vatican to Paris! On the altar of the Church of the Madeleine, the Holy Mother Eloise aborted Jesus.”

The crime was part of a broader anti-Catholic FEMEN campaign entitled “Christmas is canceled.” In support of the movement, nude activists were dispatched across Europe to subject other churches to similar indignities. The purpose of this campaign was to protest the Catholic Church’s support for the unborn and its continued opposition to abortion.

The church’s priest filed a complaint, leading to Bouton’s conviction for “sexual display” by a national court. She was ordered to pay the parish 2,000 euros “in respect of non-pecuniary damage” and to contribute 1,500 euros to the church’s costs. In addition, Bouton was given a one-month prison sentence.

The Catholic News Agency reported that the initial judgment was confirmed both on appeal and before the highest judicial court in France, the court of cassation.

A simulated abortion on the altar ‘not insulting’

On Oct. 13, the ECHR ruled that Bouton had merely been exercising her “freedom of expression” and that France had violated Article 10 of the European Convention on Human Rights when it penalized her.

While the court “acknowledged that a protest performance in a church could be regarded as flouting the acceptable rules of conduct in a place of worship and had concluded that certain sanctions could in principle be justified by the protection of the rights of others,” it claimed Bouton’s “conduct had not been insulting or hateful.”

The ECHR further argued that the French courts had not examined “whether the applicant’s action had been ‘gratuitously offensive’ to religious beliefs, whether it had been insulting or whether it had incited disrespect or hatred towards the Catholic Church.”

The court went so far as to call Bouton’s actions “poignant,” suggesting that “her protest had not been staged during mass, that her actions had been brief … and that she had left the church as soon as she was asked to do so.”

The Christian Post reported that the ECHR ordered France to pay Bouton 9,800 euros “in respect of non-pecuniary damage.”

Grégor Puppinck, the director of the European Center for Law and Justice, wrote earlier this month that it “is becoming a habit at the ECHR to defend these attacks in churches and against the Church.”

Puppinck cited an instance where a feminist extremist group, represented by a lawyer who previously worked for a George Soros foundation and subsequently become an ECHR judge, attacked the Orthodox cathedral in Moscow. The attack was deemed by the ECHR to be a form of protected expression.

In 2018, the ECHR upheld a criminal conviction for an Austrian lecturer who noted that the prophet Muhammad’s documented sexual relationship with 9-year-old Aisha made him a pedophile. DW reported that the court then sought to balance the applicant’s “right to freedom of expression with the right of others to have their religious feelings protected, and served the legitimate aim of preserving religious peace in Austria.”

Puppinck wrote, “How can one not see a double standard, coupled with a guilty blindness? The Austrian lecturer only spoke the truth, with decency and discretion, while the Femen’s aim was to hurt and offend.”

Essayist Blanche Streb wrote in Aleteia, “Here we are defending (and we must!) freedom of expression. What is not defended here is the intelligence of the expression.”

Streb added, “To attack the symbols of Christianity, even if it is to recognize its strength, is above all to forget what human rights and modern democracy owe to Christianity: the inalienable dignity of the human being.”

Rod Dreher, writing in the American Conservative, pointed out that “in many European countries, it is against the law to say that a penis-having person who claims to be a woman is really a man. But according to the ECHR, you can commit the ultimate blasphemy on the altar of a Catholic Church, during the liturgy, and it’s protected speech … Something very dark and evil is coming.”

Mary Harrington, editor at UnHerd, underscored the uneven approach to perceived violations of places regarded as sacred, tweeting, “When one side is re-introducing blasphemy laws by the back door, while literally pissing on your altar, it’s probably time to stop bleating about the ‘marketplace of ideas.’”

u201cWhen one side is re-introducing blasphemy laws by the back door, while literally pissing on your altar, itu2019s probably time to stop bleating about the u201cmarketplace of ideasu201du201d

If mRNA is now being found in breast milk, then covid “vaccine” safety claims are lies
CNN Is Mute as Biden Still Doesn’t Understand Meaning of ‘Semi-Automatic Weapons’
‘Irredeemably flawed’: Alternative media publisher says ‘only solution’ in Arizona is to hold new election after tidal wave of problems in GOP areas
Big Tech censorship of vitamin D as covid treatment KILLED 116,000 Americans so far, warns the Health Ranger, who was banned by YouTube, Twitter and Facebook for telling the TRUTH
Kim Kardashian breaks her silence on Balenciaga controversy, says she’s ‘disgusted and outraged’