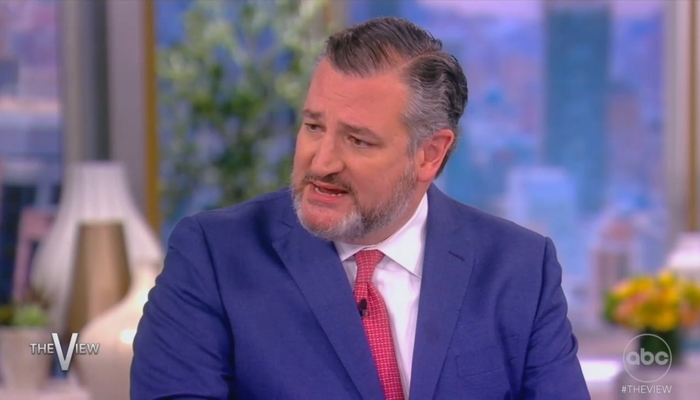 On the same day Newsweek ran a fake fact check of a study by MRC Free Speech America about Google’s censorship of Republican campaigns, the outlet also ran a “fact check” Wednesday smearing Senator Ted Cruz (R-TX), claiming he falsely claimed Antifa “carried out a year of fiery, destructive protests across the U.S.”

Cruz’s comments came Monday on ABC’s The View, when he countered co-host Whoopi Goldberg’s attack on the right as violent: “Did I miss an entire year of Antifa riots where cities across this country were burning and police cars were being firebombed?”

Writer Tim Norton correctly noted Cruz was likely “referring to the protests that followed the death of George Floyd in 2020,” and the subsequent destruction of property in cities such as Minneapolis and then “Washington D.C., St Louis, Kansas City, Oregon, Atlanta, Seattle and New York City.”

He also correctly pointed out that “protests” (read: Antifa) “continued for 100 days” in Portland, Oregon, but things fell apart as he dismissed the demonstrations as “not typified by fires or arson” and therefore “[t]he majority of the Floyd protests” nationwide “took place between late May and early June 2020.”

Norton inadvertently undermined that claim by explaining “other violent, fiery clashes at other protests against police violence and racial injustice between 2020 and 2021” such as September 2020 rioting in Louisville, Kentucky and Brooklyn Center, Minnesota in April 2021.

The whiplash continued as he insisted Cruz was “significantly stretching the truth, even if taken figuratively” even though “many businesses were damaged or destroyed as a result of arson” because “Antifa is not a formalized group or association” and Black Lives Matter inspired global calls to action for racial justice. Really.

In other words, Antifa isn’t real and BLM protests made people feel special, so Cruz was…lying?

That seemed to have been what Norton was arguing as he said Cruz “grossly mischaracterized both the nature, scope and length of time these protests took” and that, while the shenanigans in Portland went on for 100 days, “it is inaccurate to describe or imply that these happened across the country with each beset by arson.”

In giving him a “false” rating, Norton explained (click “expand”):

The “Antifa riots” Cruz refers to are almost certainly the protests, which followed George Floyd’s death. Most of these occurred between late May to early June 2020. Although many buildings were damaged or destroyed by fire during protests, this did not carry on throughout the year.

While protests did continue in Portland, Oregon for nearly a year, according to media reports, these were not all characterized by arson. Most other cities quietened down after June 2020.

Labeling the protests as “Antifa riots” is misleading too as there is no organization or group known as such.

And on April 24, 2021, Newsweek itself posted an article with the title: “Antifa Activists Vow to Keep Fighting—Even as ‘Terrorists’”.

And it wasn’t just them. ABC News wrote in May 2021 about the constant barrage of left-wing violence in Portland, saying that “residents have waning patience for antifa” with “[m]uch of the blame for the chaos, property damage and violence over the last year have landed on the self-described anti-racist, anti-facist far left organizers.”

California’s Bay Area CW affiliate said on April 15, 2021 that there was “a lot of cleanup” underway in Walnut Creek “after a band of protestors tagged 25 buildings with graffiti, including City Hall” with police under the belief that “Antifa was here.”

Staying in the Golden State, the San Diego Union-Tribune covered December 2021 arrests of Antifa members who allegedly assaulted participants in a “Patriot March” in January of that year.

If Wikipedia floats your boat, they compiled a list of over 60 incidents having resulted from Floyd’s June 2020 murder.

If Norton wants to debate the facts, it’s best he do some research first.

Ron DeSantis has a new book coming out in early 2023
Alyssa Milano says she returned her Tesla because Elon Musk could have solved world hunger with the money he used to buy Twitter
Ruhle, Lefty Journo Panic Over Rise of Authoritarianism in US
Senators refuse to approve any new defense spending unless military’s covid jab mandate ends
NBC’s Todd Pesters Netanyahu About Donald Trump & Anti-Semitism