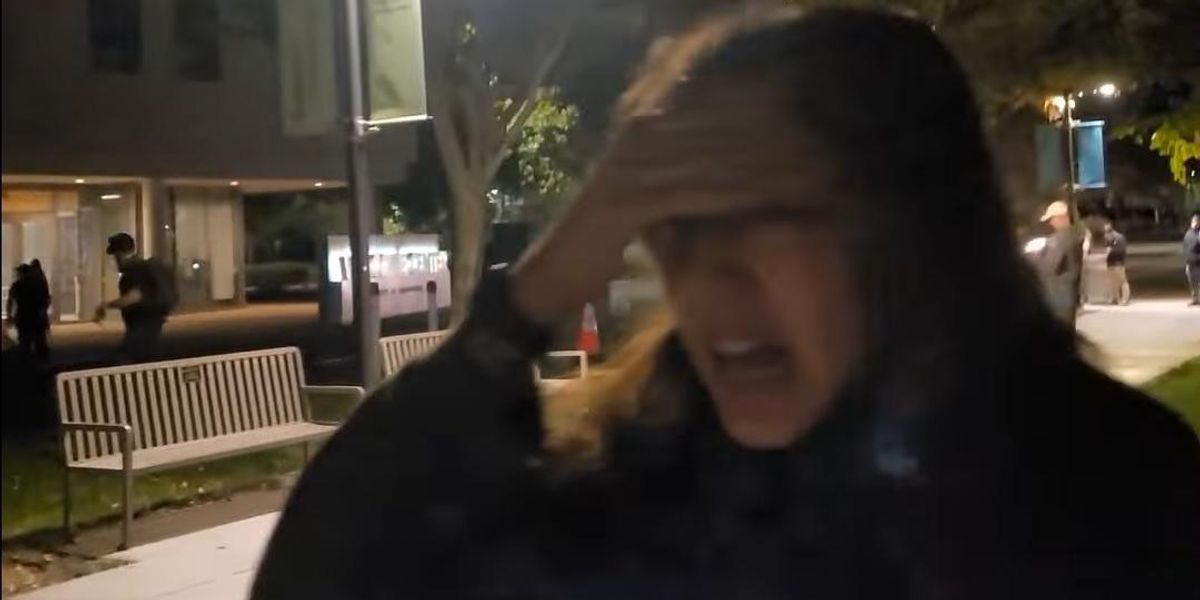 A Turning Point USA event was shut down Tuesday evening after multiple attacks by leftist militants on attendees were answered, not by the UC Davis police, who were kept from intervening, but by a handful of counter-protesters ready for a fight.

A night with ‘MAGA Hulk’

The UC Davis student chapter of Turning Point USA organized an event for Oct. 25, set to feature conservative speaker Stephen Davis, the host of the podcast “SMASH with MAGA Hulk.”

The chapter vice president of UC Davis TPUSA, Luke Shalz, noted that Stephen Davis is “an African-American gentleman who does not believe in systemic racism.”

In advance of the event featuring a black conservative speaker, flyers were distributed on campus accusing TPUSA of being “racist, homophobic, transphobic, and anti-immigrant” and of celebrating violence. The flyers also defamed Kyle Rittenhouse, who spoke at a TPUSA event, as a “racist murder [sic].”

The flyers called on “anyone who opposes racism and bigotry to stand together and make it known that TPUSA is not welcome on our campus.”

u201cSPOTTED at UC DAVIS. All of our flyers for our Stephen Davis event next week have been ripped down and replaced with these @charliekirk11 @TPUSAu201d

Similar posts were circulated online accusing Stephen Davis of being a fascist for “denying systemic racism.”

u201cCOMMUNITY ALERT! Turning Point USA is bringing Stephen Davis (aka “Maga Hulk”) to UCD on Oct. 25th for an event denying systemic racism. Show up and make it clear that these fascists aren’t welcome on our campus. Tues 10/25 @ 6pm on Vanderhoef Quad (near the Mondavi Center).u201d

Notwithstanding calls for censorship ahead of the event, the university claimed that it was “committed to the First Amendment, and … required to uphold it. We affirm the right of our students — in this instance, Turning Point USA at UC Davis — to invite speakers to our campus, just as we affirm the right of others to protest speakers whose views they find upsetting or offensive.”

The university also reportedly informed the TPUSA campus chapter that UC Davis police would be present at the event and that they would intervene if protests turned violent.

However, when leftist protesters began using barriers as battering rams and pepper-spraying young women, the campus police — said to have been on site — did not take action or deploy into the crowd.

The university told KCRA3 that officers had been on standby when the fighting broke out, but did not act because “the situation de-escalated on its own, eliminating the need for the police to engage.”

The brawl that ensued allegedly involved 100 people and began, according to TPUSA’s field team, when Antifa began provoking people trying to enter the venue.

In a statement, UC Davis noted there had been reports of Antifa supporters involved in the fighting and pepper-spraying and that members of the pugnacious men’s group Proud Boys may have also been on the scene.

One young female conservative was pepper-sprayed by leftist agitators.

UC Davis also indicated that some “in the crowd used barricades to beat on the glass of the UC Davis Conference Center, where about 30 people were inside waiting for the event to begin.”

Student Affairs staff reportedly determined that the chaos outside presented sufficient danger to warrant shutting down the event.

The UC Davis TPUSA chapter ultimately agreed, later stating, “Rather than risk any further escalation of violence, our TPUSA chapter leadership decided to cancel the event when it became apparent campus PD was unable to disperse the violent agitators outside while also keeping our students safe inside.”

u201cRather than risk any further escalation of violence, our TPUSA chapter leadership decided to cancel the event when it became apparent campus PD was unable to disperse the violent agitators outside while also keeping our students safe inside.u201d

“This is a great loss for free speech, our speaker Stephen Davis, and for the students at UC Davis. TPUSA condemns all violence and refuses to be cowed by those who use threats and intimidation to stop conservatives on campus,” TPUSA tweeted.

On Thursday, former acting Director of National Intelligence Richard Grenell called out UC Davis chancellor Gary May, suggesting he had failed up to stand up for true diversity on campus after Davis, a black speaker, had been shut down by “radical lefties.”

Catherine Brinkley, a UC Davis professor, celebrated the silencing of a black conservative and the leftist attacks on unarmed students, stating she was “really proud of our students, faculty, staff and community who showed up to counter-rally a planned speaking event at UC Davis. Thank you for putting your bodies on the line.”

u201cI am really proud of our students, faculty, staff and community who showed up to counter-rally a planned speaking event at UC Davis. nnThank you for putting your bodies on the line.u201d

It is unclear whether the event will be rescheduled.

According to Elon Musk, Apple CEO Tim Cook says the company never considered yanking Twitter from the App Store
Chinese communist official blames US fentanyl and coronavirus deaths on ‘freedom’ and gets scorched by backlash
New study claims that ‘fear mongering and misinformation’ may be responsible for adverse effects attributed to vaccines
MSNBC’s Ruhle Shocked to Discover Jan 6 Committee Is Political
Kanye West announces 2024 presidential bid despite netting fewer than 70,000 votes in 2020