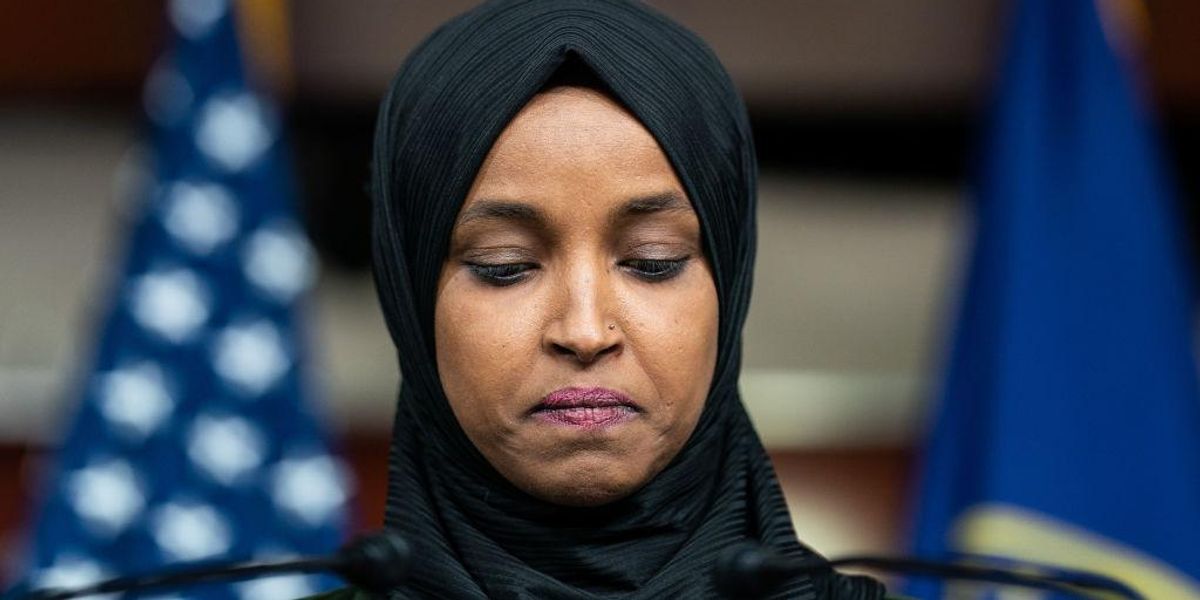 On Thursday, Omar held a town hall meeting where at least one constituent shared his concerns about America’s continued financial support for the war in Ukraine.

“JUST IN: Anti War Protester confronts #SquadMember @IlhanMN on her funding of the Ukrainian War that is leading us into nuclear war,” the tweet with the video reads. “She was part of the cowardly 30 who rescinded the letter calling for diplomatic talks with Russia!”

u201cJUST IN: Anti War Protester confronts #SquadMember @IlhanMN on her funding of the Ukrainian War that is leading us into nuclear war. She was part of the cowardly 30 who rescinded the letter calling for diplomatic talks with Russia!u201d

The unidentified man in the audience openly criticized Omar for voting to fund Ukrainian forces, even as her party’s traditional platform eschews American intervention in foreign wars.

“You are supposed to be a progressive Democrat,” the unnamed audience member shouted while Omar was speaking. “Anti-war. Anti-war! Eighty billion to Ukraine is not anti-war!”

When Omar replied that the U.S. funding helped Ukrainians defend themselves, the man claimed that Ukraine, under the direction of Volodymyr Zelenskyy, was “killing its own citizens.”

Omar then pivoted to position herself as a victim and to seemingly co-opt some of the Ukrainian suffering as her own.

“We are helping little children like me,” said the Democrat, who just celebrated her 40th birthday a few weeks ago.

A few moments later, Omar became angry with the man, who continued to argue with her. She once again turned the subject back to herself and told her constituents that they have little right to weigh in on the votes she casts on their behalf.

“Unless you are someone like me that has been that child,” she yelled, “you do not get to tell me what my votes mean and how I get to vote in supporting people who desperately need …”

Audience clapping rendered the rest of her statement inaudible.

After the meeting was over, Omar continued to attack her anti-war critics online, calling them “dangerous propagandists” who spew Russian “disinformation.”

“I am sorry, you all aren’t ‘anti war protesters’,” she said, quote-tweeting Vega, “you are dangerous propagandists who are literally making a mockery of the anti war movement. I have never had the pleasure of responding to [Russia’s] ridiculous internet disinformation in person before. Thank you for the opportunity.”

“I am amazed at the nerve that some people have to not be upset with the country literally waging war, but at the country defending itself and those helping them do that,” she added in another tweet. “I was even told by one of these people tonight, ‘it’s America that started the Russia war’, seriously wtf.”

Despite her current support, Omar initially expressed skepticism about America’s role in the Ukraine-Russia conflict and voted against a Ukrainian aid package back in early February. The U.S. has since sent tens of billions of dollars to Ukraine.

Omar’s contentious town hall marks the second time in recent weeks that a member of the Squad has been confronted about her support for funding the war in Ukraine. Earlier this month, Rep. Alexandria Ocasio-Cortez (D-N.Y.) was similarly challenged about her pro-war voting record at a town hall event.

Diane Sare is an obscure New York politician from the LaRouche Party who is trying to unseat Senate Majority Leader Chuck Schumer, who is widely expected to be reelected in November.