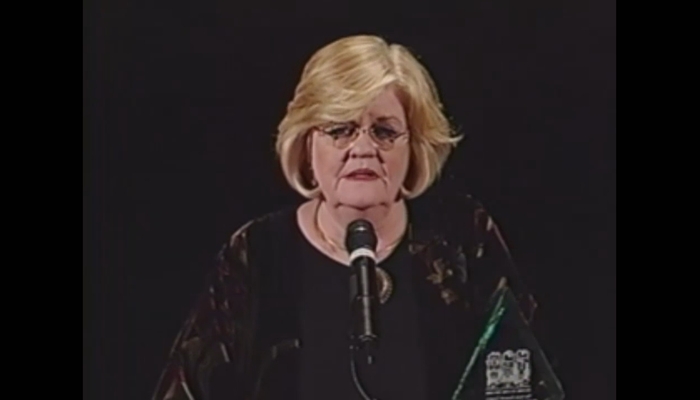 Literary agent and blog site (Lucianne.com) proprietor Lucianne Goldberg, who was a friend to the Media Research Center, passed away Wednesday (Oct. 26) at age 87. She took the stage at our DisHonors Awards in 2002, accepting an award, in jest, on behalf of Helen Thomas. For many years, she generously served as a judge for the MRC’s annual “Best of Notable Quotables: Awards for the Year’s Worst Reporting.”

She was most famous as Linda Tripp’s friend who revealed to a journalist the news about President Bill Clinton’s sexual relationship with Monica Lewinsky, making her reviled to much of the left-wing Washington, DC press corps.

On Thursday, January 17, 2002, before an audience at the Ronald Reagan Building and International Trade Center in Washington, D.C., the Media Research Center presented the “DisHonors Awards: Roasting the Most Outrageously Biased Liberal Reporters of 2001.”

On behalf of Helen Thomas, Goldberg accepted the “Bring Back Bubba Award (for the Best Journalistic Lewinsky).” Thomas, a long-time White House reporter, had hailed former President Bill Clinton: “He is the man from Hope, and that is what he has given us, hope. We miss him.”

In accepting the award, Goldberg noted the debt owed her by many journalists: “I was able to give them one solid year of golden triple platinum overtime covering the Monica Lewinsky story. They love me for it. They have bought homes and trailers, golfing equipment, sports cars and paid their alimony off of Monica Lewinsky.”

The video above shows the clip of Thomas, presenter John Fund introducing Goldberg (“the one woman Bill Clinton would never want to see in the White House”), followed by some remarks by Goldberg.

Earlier posts on DisHonors Awards participants who have passed away:

Crypto executive dies in helicopter crash â€“ the third crypto entrepreneur to die unexpectedly over the past few weeks
Air Marshals threaten Biden with ‘mutiny’ if he tries to send them to southwest border
FTX laundered money to Ukraine for biological weapons shelter funding
‘Unwoke With Kevin and Kruiser #54: Disney’s Minor Woke-ectomy and Superheroes of Yore
Newsmax’s Chris Salcedo Slams Media for Silence on Dem Anti-Semites