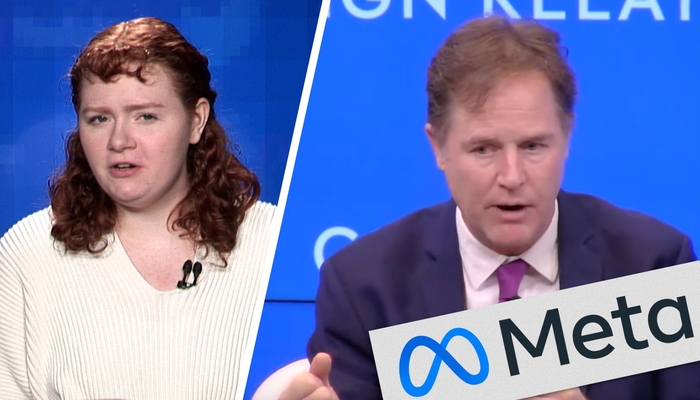 Clegg spoke at a “Social Media and Digital Diplomacy” event hosted by think tank Council on Foreign Relations on Oct. 21. During the interview, he attempted to frame the parent company of Facebook and Instagram as politically neutral.

On this week’s episode of CensorTrack with Paiten, we exposed Meta for what it really is: a platform that caves to anti-free-speech radicals.

”It would be so much more preferable that we were basically told by Congress what the rules of the game are in terms of where we should draw the line about what is and what is not acceptable,” he said.

Clegg’s comments are no more than empty platitudes. Meta has repeatedly shown bias in its content moderation policies.

The company dealt a major blow to free speech online when Facebook suspended former President Donald Trump in 2021. Zuckerberg claimed at the time, “the risks of allowing the President to continue to use our service” were “simply too great.”

At the end of July, Meta-owned Instagram suspended the activist account TReVoices – an organization that seeks to protect children from “medical transition.” Scott Newgent, a biological female who suffered the life-altering effects of medical transition and has since become a vocal advocate for “stopping medical transitioning children worldwide and making trans health safe,” founded TReVoices.

Facebook has even censored biblical Scripture. The platform placed a sensitive content filter over a Bible verse graphic. For some reason, Facebook labeled the image as inappropriate or potentially harmful.

Meta – and most other Big Tech platforms for that matter — need to grow a backbone.

The company has allowed itself to be infiltrated and hijacked by radical anti-American ideology.

Before and after the 2022 U.S. midterm elections, we must call on Big Tech companies to mirror the First Amendment, while providing transparency, clarity on hate speech and equal footing for conservatives.

Also, check out some of our previous episodes:

Conservatives are under attack. If you have been censored, contact us at the MRC Free Speech America contact form on CensorTrack.org, and help us hold Big Tech accountable.

UN faces pushback against assertion that ‘words can be weapons’
‘Amnesty begins next week’: Elon Musk says Twitter will reinstate suspended accounts, with certain exceptions
Elon Musk may reveal what happened behind the scenes of Twitter’s pre-election censorship of the Hunter Biden laptop story
70-year-old Marine veteran fighting for his life after braving devastating rowhouse explosion to rescue strangers
Is DEI the Future of Health Care?