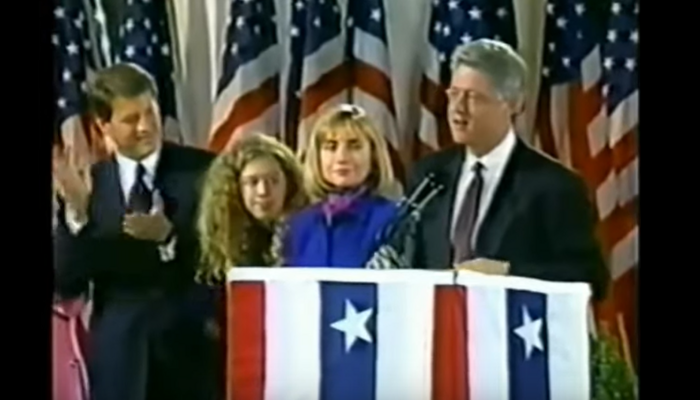 Decades before the media’s embarrassing love affair with Barack Obama, or their open warfare against Donald Trump, there was the 1992 presidential campaign. Liberal journalists had chafed at being unable to thwart election victories by Ronald Reagan and George H. W. Bush in the 1980s, so by ’92 frustrated reporters opted to become brazen promoters of Bill Clinton’s candidacy.

Looking back 30 years later, it’s still amazing at how utterly shameless the spin was. After Clinton was credibly accused of adultery right before the New Hampshire primary, former Washington Post reporter Sidney Blumenthal twisted it into a “family values” moment: “While George Bush — all whiteness — talks about ‘family values,’ the Clintons demonstrate them by confessing to adultery,” Blumenthal wrote in The New Republic.

And after a 1969 letter showed Clinton thanking the ROTC for “saving me from the draft,” Time editor-at-large Strobe Talbott performed damage control on the roundtable program Inside Washington: “It would have been outrageous if he had been done in by the draft thing because that was a bum rap. The word ‘draft dodging’ does not belong in any sentence with Bill Clinton’s name in it.”

For those who don’t know, both Blumenthal and Talbott secured powerful positions within the Clinton administration when it took office in 1993.

The New Republic’s senior editor Hendrik Hertzberg polled political reporters during the primaries: “I asked each of them, one after another, this question: If you were a New Hampshire Democrat, whom would you vote for? The answer was always the same; and the answer was always Clinton….Several told me they were convinced that Clinton is the most talented presidential candidate they have ever encountered, JFK included.”

If the press was already in the tank for Clinton vs. other Democrats during the primaries, there was no chance of them holding back when it became Clinton vs. Bush (and Ross Perot) in the general election. “News coverage” of the Clinton-Gore ticket that summer became an exercise in hagiography.

“When they [Bill Clinton and Al Gore] appear with their wives, Hillary Clinton and Tipper Gore, they look like two suburban couples, perhaps old college friends, out on the town for a good time. And whether they are playing miniature golf with their wives, tossing a football around or gleefully backslapping each other at campaign rallies, the images and the message are always the same: Youth, vigor, energy. And change,” the Washington Post’s Edward Walsh wrote for a July 23 report.

Newsweek’s Eleanor Clift crushed hard for the Democratic ticket when it was announced. “I must say I was struck by the expanse of their chests. They may have to put out their stats,” she exclaimed on CNN’s Inside Politics on July 10.

Two days later, on The McLaughlin Group, Clift was still thrilled: “Looking at some of that footage, it looks like the all-beefcake ticket.”

“Delighted Democrats like to say of Clinton and Gore that theirs is a partnership where 1 plus 1 equals 5, and when Hillary Clinton and Tipper Gore are added to the equation, 2 plus 2 equals 10. And the power of their numbers does seem to multiply exponentially at times such as this afternoon, when the eight-bus caravan made a semi-impromptu stop at a rest area in Bowling Green, Mo.,” the Washington Post’s Dave Maraniss wrote in an August 6 “Campaign Journal.”

The press decried any attacks on their heroes. “While Bill Clinton motors through the heartland with a cheerful middle-of-the-road message, Bush is conspicuously stroking the party’s conservative wing, echoing the cutting rhetoric of yore: anti-tax, anti-crime, anti-abortion. And he’s using time-tested slime-and-distance tactics,” Newsweek’s Howard Fineman and Ann McDaniel wrote in an August 17 story.

The media felt the pain whenever the Clintons were criticized: “When you hear yourself held up, as you were at the Republican convention, some people have used the word ‘demonized,’ does it make you hurt or make you mad?” NBC’s Jane Pauley asked Hillary Clinton in a September 8 Dateline. “What was the grossest distortion of your record?”

A September headline in the New York Times captured the media’s overarching spin: “Bush Is Harsh, His Backers Harsher.” In October, Bryant Gumbel presented it as fact that Bush would resort to low blows at a debate with Bill Clinton when he asked commentator John Chancellor: “How nasty do you expect George Bush to try to be?” Three days later on CBS, Harry Smith made his disdain clear, when he cast Bush’s questions about Clinton’s college-era trip to Moscow as “red-baiting junk.”

“Through it all, [Clinton] persevered, his resilience and toughness becoming antidotes to the attacks on his character,” Time’s Michael Kramer celebrated in an October 19 piece. “A lifetime in politics equipped him with tactical savvy and strategic good sense. Like other Southern populists before him, Clinton seemed instinctively to know how to put the hay down where the goats were.” “The swooning and the cooing on the rope lines during the last days of the Clinton campaign were unavoidably reminiscent of Kennedy. In Louisville, Kentucky, the scene seemed out of Beatlemania,” Time’s Walter Shapiro wrote four weeks later, after Clinton had won. “Cheryl Russell, editor of The Boomer Report, a monthly newsletter on consumer trends, captures a new dimension in the national psyche when she confides, ‘Every woman I know is having sex dreams about Bill Clinton. We’re finally getting a President our own age who we can imagine having sex with. I don’t recall anyone having sex dreams about Michael Dukakis.’”

While Clinton won only 43 percent of the popular vote (vs. 38% for Bush), a poll of Washington media bureau chiefs and correspondents found that only seven percent voted for Bush in 1992, vs. 89 percent for Clinton (and two percent for independent Ross Perot).

There were a few in the media who decried the obvious bias of the ’92 campaign. CNN anchor Reid Collins complained on Reliable Sources that “the coverage has not been equal, has not been fair.”

After the election, former Newsweek reporter Jacob Weisberg wrote in The New Republic that “coverage of the campaign vindicated exactly what conservatives have been saying for years about liberal bias in the media.”

Thirty years ago, most of today’s alternatives to the liberal media — conservative talk radio, Fox News, the Internet — were either in their infancy or not even conceived, so the unrestrained slant in that year’s campaign coverage probably had more influence than it would have in today’s media environment.

Nevertheless, the ’92 campaign still marked a huge step away from a news media that saw its job as reporting facts and letting the public decide, and towards a media that itches to use its clout to steer events in a liberal direction.

For more examples from our flashback series, which we call the NewsBusters Time Machine, go here.