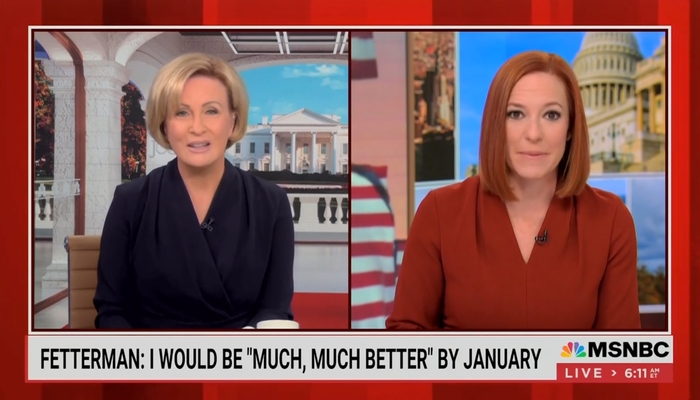 Psaki keyed off Chuck Schumer’s hot-mic moment in which, among other things, he told Biden that things are “going downhill” for Dems in Georgia. Psaki admitted that Dems are “fearful,” “worried,” have ”real concern,” and,”it’s felt worse over the last week or so.”

But not to worry: Mika Brzezinski to the rescue! Focusing on John Fetterman, she backed the claim he made yesterday to Joy Reid that, despite his disastrous debate performance:

“By January I will be much much better, but Oz will still be a fraud.”

In fact, it’s not necessarily true that Fetterman will be “much, much better by January”—or better at all.

As per Johns Hopkins Health [emphasis added throughout]:

“The first three months after a stroke are the most important for recovery and when patients will see the most improvement.”

Fetterman’s stroke was five months ago.

Anyone who watched the debate saw a textbook example.

“It is very difficult to estimate how long a patient will take to recover from a stroke, which symptoms they will experience, and if those symptoms will resolve themselves over time or be permanently disabling.”

So for Fetterman to boast that he will be “much, much better by January” is wishful thinking at best. Made even more questionable by his refusal to release his medical records. It could be that what we saw in the debate from Fetterman is basically what we’ll get going forward. There was a bit of unintentional humor. Psaki said she had gone to Fetterman’s hometown of Braddock, Pennsylvania, where he had been mayor, and followed door-to-door canvassers around. And—surprise!—everybody liked Fetterman! How desperate are Dems for some good news about Fetterman that Psaki felt obliged to go to his hometown to find fans!?

Note: Desperate Mika also mentioned that Oprah Winfrey, whom Mika described as the person who “created” Dr. Oz, is nowhere to be found in supporting him. Mika ascribed that to Oprah being “embarrassed” by Oz. But the obvious explanation is that Oprah is a highly partisan, Obama-loving Democrat! It’s one thing for Oprah to have seen a money-making opportunity in promoting the Dr. Oz show. It’s another for her to endorse a Republican! That was never going to happen!

On Morning Joe, Jen Psaki admitting that Democrats are “fearful” about the midterms, but Mika Brzezinski backing John Fetterman’s unsubstantiated claim that he will be “much, much, better by January,” was sponsored in part by Schwab, Amazon, Subway, and Dove.

JEN PSAKI: Yeah, I mean, first of all, the hot mic will get you every time, Chuck Schumer. I’ve been there.

Look, I think what we heard there and what you saw on the screen is similar to a lot ftof the conversations Democrats are having behind the scenes, and a lot of people I talked to as well.

People are fearful about where the momentum is going in some of these races. Yes, there are very encouraging signs, like the record early-vote numbers. But numbers in some of the House races are not where they should be. People are trying to get – a lot of people I talked to are worried about voters being encouraged and excited about people at the top of the ticket, and maybe not excited enough to vote for the congressional candidates. And that’s a real concern.

And so, I think it’s a reflection of the fact that Democrats are kind of worried about where this is going. And it’s felt worse over the last week or so.

MIKA BRZEZINSKI: And Jen, I just want to focus in on Pennsylvania, and just big picture with John Fetterman and Dr. Oz. I do think all this attention on his stroke has taken away from a point that he made so well in his interview yesterday, and that is that he’ll continue to get better. People do have strokes. People have strokes earlier in life. People have strokes later in life. And people recover from strokes.

But Dr. Oz will still be Dr. Oz. And let’s talk about who that is, because it’s all been so distracted from. Number one, he is someone who has misled his viewers on the Dr. Oz show. For years, he was even brought into Washington and grilled by lawmakers for his quack recipes and fixes for medical addictions–conditions , that didn’t work.

And the very person who created him, Oprah Winfrey: I don’t see her anywhere. I don’t think she wants to get anywhere near him, because it’s embarrassing. And yet, you know, the focus is on this stroke. I think he really brought it home.

You went to Pennsylvania. You’re talking to voters. What are they talking about when it comes to these two candidates and their choices overall?

PSAKI: Yeah, that’s right, Mika. And I was in Braddock, the home of John Fetterman, last Thursday. And I spent about six hours following canvassers around.

What should be encouraging to the Fetterman team, and granted I was in his hometown. Everybody there we talked to, they talked to, was supportive of him. They knew who he was. They liked him.