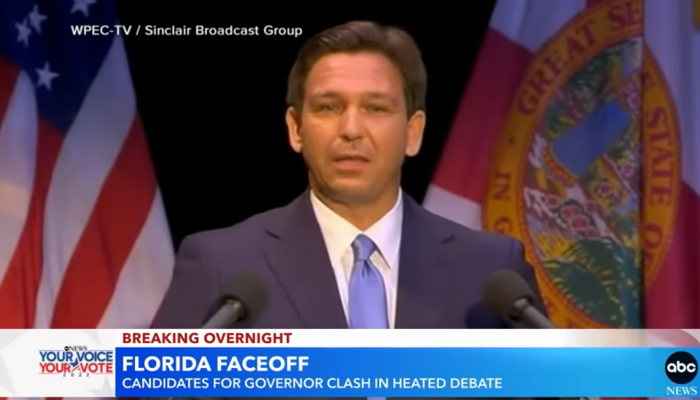 But under the guise of fighting misinformation on abortion and transgender issues by Ron DeSantis, the reporters spread their own.

They even questioned the moderator’s impartiality (dimissed as “working the referees” when done by conservative candidates) noting the moderator’s connection to Sinclair, a television news conglomerate (regularly targeted by the Times) that doesn’t follow conventional liberal media wisdom.

The moderator, Liz Quirantes of WPEC, struggled to keep quiet the audience in Fort Pierce, which regularly applauded, cheered, jeered and interrupted the exchanges. Some of Ms. Quirantes’s questions, which she said came from viewers, appeared to be leading the candidates toward conservative points of view. WPEC is a CBS affiliate owned by the Sinclair Broadcast Group.

They half-heartedly tried to boost Crist’s ridiculous assertions that DeSantis “ignored science” by defying the liberal lust for lockdowns during the height of the Covid crisis, and that DeSantis’s impressive response to Hurricane Ian was grievously flawed.

Later, asked whether abortion should be banned after a specific week in pregnancy, Mr. DeSantis made a number of false or misleading claims.

He accused Mr. Crist of supporting abortion “up until the moment of birth.” That is a common Republican claim, but abortion until the moment of birth doesn’t exist, even in states without gestational limits. He also said Mr. Crist supported “dismemberment abortions,” a pejorative term for procedures performed later in pregnancy that, when they do happen, are often prompted by medical emergencies or severe fetal abnormalities. (More than 92 percent of abortions in the United States are performed much earlier, in the first trimester.)

Abortion up to the moment of birth, or “late-term” or “partial-birth” abortions, as well as “dismemberment abortions,” do in fact occur in the United States, as even the Times must subliminally admit. For DeSantis to acknowledge that fact is neither “false” nor “misleading.”

And Crist (before resigning his House seat to run for governor) was one of the Democratic co-sponsors of the “Women’s Health Protection Act,” which would “permit health care providers to provide abortion services without limitations or requirements.”

More than perhaps any other sitting governor, Mr. DeSantis has used issues like race and transgender rights to stir up his conservative base.

That was on display in Monday’s debate, in which he gave a graphic and inaccurate description of gender-affirming care for transgender children, suggesting falsely that doctors were “mutilating” minors. In reality, gender-affirming care — which major medical associations, including pediatric associations, endorse — primarily involves social support, nonpermanent treatments like puberty blockers (which Mr. DeSantis also denounced), and hormonal treatments.

“Primarily” is doing a lot of work in the above paragraph. There’s no evidence that puberty blockers don’t in fact have permanent effects, and there are many sad examples of minors who are convinced they are transgender pressured into undergoing surgery in the United States.