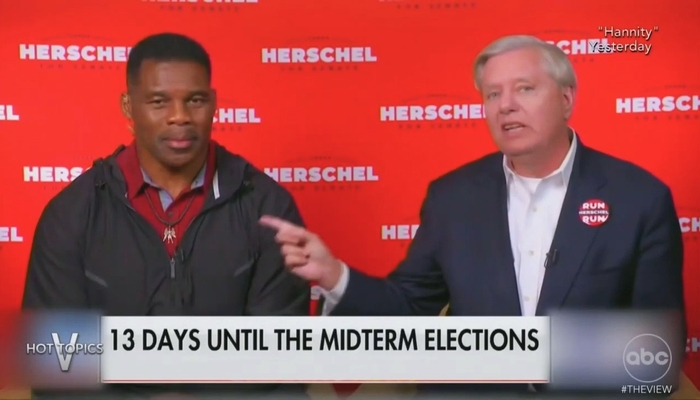 Herschel Walker is demonstrating once again that our liberal media despise black Republicans. The network shows leaped on a second anonymous woman claiming Walker paid for her abortion. It’s a weird take, since they love abortions and don’t think they’re scandalous, unless a Republican pays for one. They suggest minority Republicans can’t truly be minorities unless they’re fully Democrat.

Whoopi Goldberg and Sunny Hostin unloaded on Walker and on Lindsey Graham for suggesting on Hannity that Walker destroys the narrative that Republicans are racist. The View crew suggested Walker wasn’t qualified for the Senate….but they also have unleashed hateful statements against Sen. Tim Scott and Justice Clarence Thomas.

CBS celebrated a new movie about an underground abortion mill that operated in Chicago in 1968, and Monica Lewinsky has a new article posted at Vanity Fair where she insists people need to turn out to vote for the precious right to kill babies. I made fun of it on Twitter….and Lewinsky retweeted it, inspiring a pile of pro-abortion trolls to bring the hate speech to me.