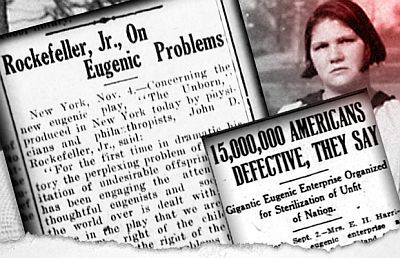 (Natural News)
It has come to light that The Atlantic, which was founded upon the commitment to “be the organ of no party or clique,” is a longtime proponent of mass sterilization and eugenics.

In its November 1950 issue, The Atlantic published an article called “Sterilization” that weight and measured the benefits of mass sterilization, particularly among “lesser” folks with health issues such as manic depression and epilepsy. The piece also targeted “certain chronic criminals” for elimination of their reproductive capacity.

Because it was believed by the writer of this piece that such “defects” are hereditary, the claim was made that there are “millions of individuals markedly unfit to live in society” because many of them “cannot care for themselves or their children and are a burden to their families or communities.”

Employing a survival-of-the-fittest “perfect race” ideology similar to what swept Nazi Germany, the writer of this piece in The Atlantic alleged that it would simply be irresponsible to allow people deemed as “defective” to procreate and possibly spread “their disabilities more widely through future generations.” (Related: Back in February, The Atlantic tried to blame “climate change” for Joe Biden’s failed economic policies.)

It was Lithuanian eugenicist Dr. Abraham Myerson who is responsible for this 1950s piece in The Atlantic, which further and openly calls for the lesser-than in society to be sterilized in order to prevent them from ever reproducing.

Believing himself to be one of society’s superiors, Myerson advocated for eliminating from the gene pool those deemed to be “socially inadequate by reason of heredity,” meaning they come from a lesser-than family.

The Atlantic reportedly extracted the article in question from Myerson’s book, Speaking of Man, which was originally published by a group called Knopf that has since become part of Penguin Random House.

Interestingly, Myerson’s piece also makes reference to what we now know of as the transgender mutilation of children, which was described as such back in the late 1950s:

“As for meddling with the sexual organs, there is a deepseated repugnance which is socially instinctive and could be overcome only by great force or very intensive social education.”

In the years that would follow the publishing of this statement, which laid the groundwork for today’s transgender craze, The Atlantic would publish more gender mutilation propaganda, including that written by “women’s rights” activist Harriet Pilpel.

“For several years, we have heard warnings about the population crisis,” Pilpel wrote in 1969. “Indeed, so concerned are we that there now are voices in the land calling for ‘compulsory sterilization’ and ‘compulsory birth control,’ for the withholding of public support for illegitimate children in excess of a certain number, for conditioning welfare monies or parole or whatever on coerced sterilization, and so on.”

“Yet little is done to make sterilization easily available on a voluntary basis, particularly to the poor and underprivileged.”

As you can see, the narrative was already being established more than half a decade ago for the removal of children’s sexual organs. What was not explicitly stated, probably because it had not yet been dreamed up by the globalists, was that this would be accomplished through an LGBT agenda of “be yourself” by permanently destroying your own body parts.

All in all, The Atlantic has time and time again promoted sterilization and eugenics against those deemed to be a burden to society. The far-left rag has always looked at some people as being not quite as equal as other people, which defies everything upon which our country was founded, including the notion that “all men are created equal.”

More related news can be found at Depopulation.news.