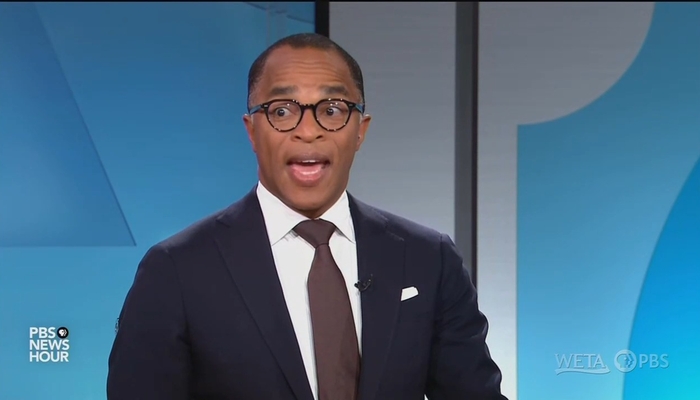 Democrats are getting gloomy about the latest midterm polls showing the red wave may be building again. But on Friday’s PBS NewsHour, Washington Post columnist Jonathan Capehart was trying to argue that 11 days left in the midterm campaign were like an “eternity.”

For seasoned TV news watchers, it recalls an interview Michael Dukakis gave to Ted Koppel with two weeks left in the 1988 campaign. He assured Koppel there was plenty of time left, and Koppel surprisingly said no, there wasn’t.

On PBS on Friday, New York Times columnist David Brooks projected doom for the Democrats, suggesting they were losing on the economy and on crime, and were losing support among Latino voters. Capehart just could not agree.

On PBS, Jonathan Capehart refuses to see an “inexorable” shift to the GOP: “But in this hyper-news cycle that we’re in now, 11 days is a very long time. Each day is an eternity. So I think we’re going to see swings back and forth over time.” (Like Dukakis at the end of ’88!) pic.twitter.com/pHgu8qF19V

JUDY WOODRUFF: So, do you see that it is moving inexorably in the Republican direction, and for the reasons that David laid out?

Jonathan Capehart: Well, inexorably is the word that I will take issue with. Yes, if you’re looking at the polls, it is looking like the momentum is shifting or has shifted back to the Republicans. But in this hyper-news cycle that we’re in now, 11 days is a very long time. Each day is an eternity. So I think we’re going to see swings back and forth over time.

Then came the PBS journalist-roundtable show Washington Week, and the biggest topic was the violent hammer attack on Paul Pelosi, House Speaker Nancy Pelosi’s husband, inside their home in San Francisco.

CBS reporter Scott McFarlane made sure to connect this to the January 6 riot — since that’s almost all her reports about for CBS. Then Washington Post reporter Ashley Parker sounded like a DNC opposition researcher, listing where Republicans upset Democrats by being “snarky.”

On the @PBS show “Washington Week,” WashPost reporter Ashley Parker made a list of Republicans who wished Paul Pelosi well after he was attacked with a hammer in his home, BUT then made snarky comments. pic.twitter.com/3dV3jh8G24

YAMICHE ALCINDOR: I also want to point out something that the Virginia governor, Glenn Youngkin, said. He was out campaigning today and I want to quote from him directly.  He said “Speaker Pelosi’s husband had a break-in last night at his house and he was assaulted. There is no room for violence anywhere.” But! He said “we’re going to send her back with him to California. That’s what we’re gonna do.” We’ve covered all sorts of attacks, and charged rhetoric, but I wonder what you make of what the governor is saying and the sort of political atmosphere that we’re living through right now.

ASHLEY PARKER: And it’s not just the governor of Virginia, and that “but” is sort of crucial. Because that was a through-line in a number of, not all, but in a number of Republican statements and tweets today. It was sort of “violence is never acceptable, but!”

There was a local Ohio representative who in a series of tweets, said he hoped Paul Pelosi makes a full recovery, violence is never acceptable, but then seeming to mock the calls of some liberal lawmakers to defund the police – said, you know, but, in a tweet, I sure hope San Francisco sends their finest social worker to respond to the attack at the Pelosi household.

And even Marjorie Taylor Greene — who before she ran for Congress accused Nancy Pelosi of treason and seemed to suggest she
should be executed for treason — she put out a tweet later today saying, again, you know, no excuse for violence, it’s unacceptable, but let’s remember all the times that I’ve been under attack.

So when you see violence like this on either side it feels like the sort of normal traditional thing is just say, this is unacceptable, full-stop. Not this is unacceptable – snarky comment about her husband, snarky comment about liberal policies, snarky both-sidesism.  But that is one thing that struck me in a number of the Republican responses today.

Parker had nothing to say about how energetically liberals on Twitter were accusing Trump and his supporters of being responsible for the Pelosi attack — or, as Twitchy pointed out, how liberals were still being snarky about Sen. Rand Paul being brutally attacked by his neighbor in 2017, which led to broken ribs.

Alcohol-fueled family game of Monopoly turns violent as furniture is overturned, gunfire erupts — and man goes to jail on assault with a deadly weapon charge
Video: Fugitive hiding under mattress opens fire on cops who were searching for him. It doesn’t end well for suspect.
There’s Even More Drama Concerning the Elections in Arizona Than You Thought
The Left Doesn’t Value Free Speech, and That’s a Problem
What Biden’s Retreat on the Rail Strike Tells Us