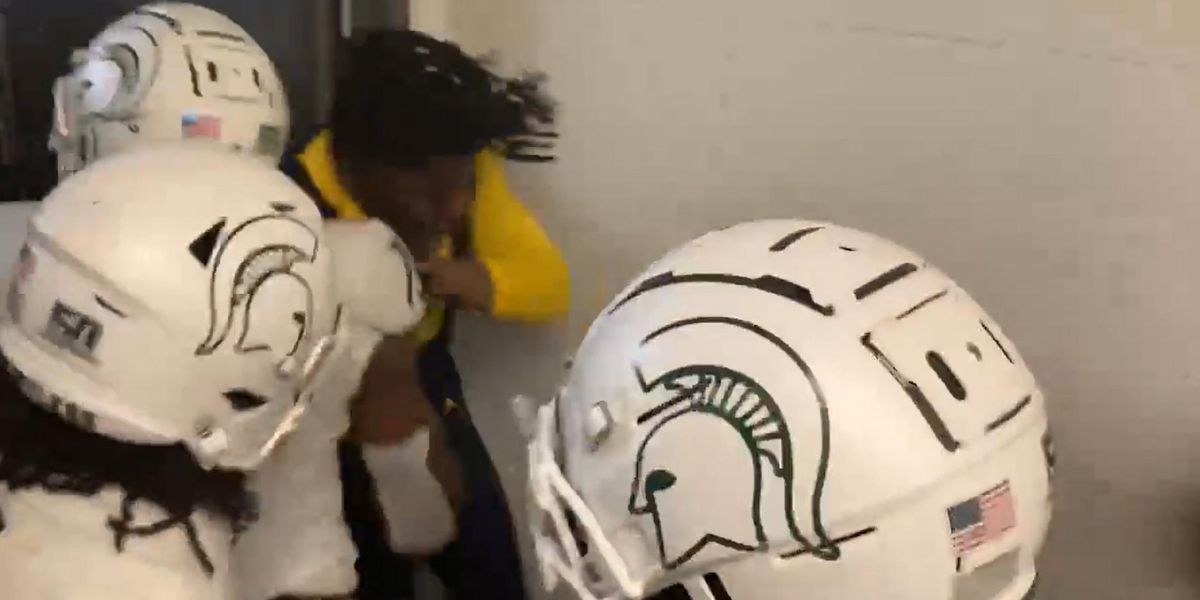 After the Michigan State Spartans lost the gridiron battle to the Michigan Wolverines 29-7 in Ann Arbor on Saturday, some MSU players evidently figured they might still win the war.

Video shows several Spartans ganging up on a Michigan football player — identified in multiple reports as defensive back Ja’Den McBurrows — in the contentious Michigan Stadium tunnel, throwing punches and landing kicks and throwing him to the ground:

u201cWOAH! The Michigan and Michigan State scuffle carried over into the tunnel. #MSUvsUM u201d

Another video taken behind police officers at a T-junction in the tunnel appears to show Michigan State players pulling down a Wolverines player:

WJRT reported that the scuffle was preempted by trash talk between members of both teams. It is unclear if the Wolverines escalated the situation by drawing attention to how they had managed 276 rushing yards over MSU’s 37.

Michigan head coach Jim Harbaugh claimed in the postgame press conference that two Wolverines players had been assaulted, characterizing what he saw in the video of the “10-on-1” skirmish as “pretty, pretty bad.”

Harbaugh added that one player had a nasal injury — potentially a broken nose — as a result of the tunnel fight.

Michigan athletic director Warde Manuel called the incident “unacceptable,” noting that “this is not what a rivalry should be about.”

Manuel indicated that Big Ten Commissioner Kevin Warren was looking into the fight.

u201cThere was an incident in the tunnel after Michigan’s rivalry win over Michigan State.nnJim Harbaugh and Warde Manuel addressed it in the postgame press conference.u201d

Spartans coach Mel Tucker tweeted afterward that “our program has a responsibility to uphold the highest level of sportsmanship. While emotions were very high at the conclusion of our rivalry game at Michigan Stadium, there is no excuse for behavior that puts our team or our opponents at risk.”

One video appears to show Tucker swinging at a fan who tried to touch him on his way out of the stadium:

According to Tucker, Michigan State would “evaluate the events in Ann Arbor and take swift and appropriate action,” in “complete cooperation with law enforcement, the Big Ten Conference and MSU and UM leadership.”

u201cUniversity of Michigan Deputy Chief of Police Melissa Overton released this statement on the incident with Michigan State in the tunnel at Michigan Stadium.u201d

Sports Illustrated reported that Michigan Stadium having only one tunnel leading to both locker rooms has been raised as a possible problem previously.

Earlier this month, Penn State and Michigan players got into a shouting match in the same tunnel: