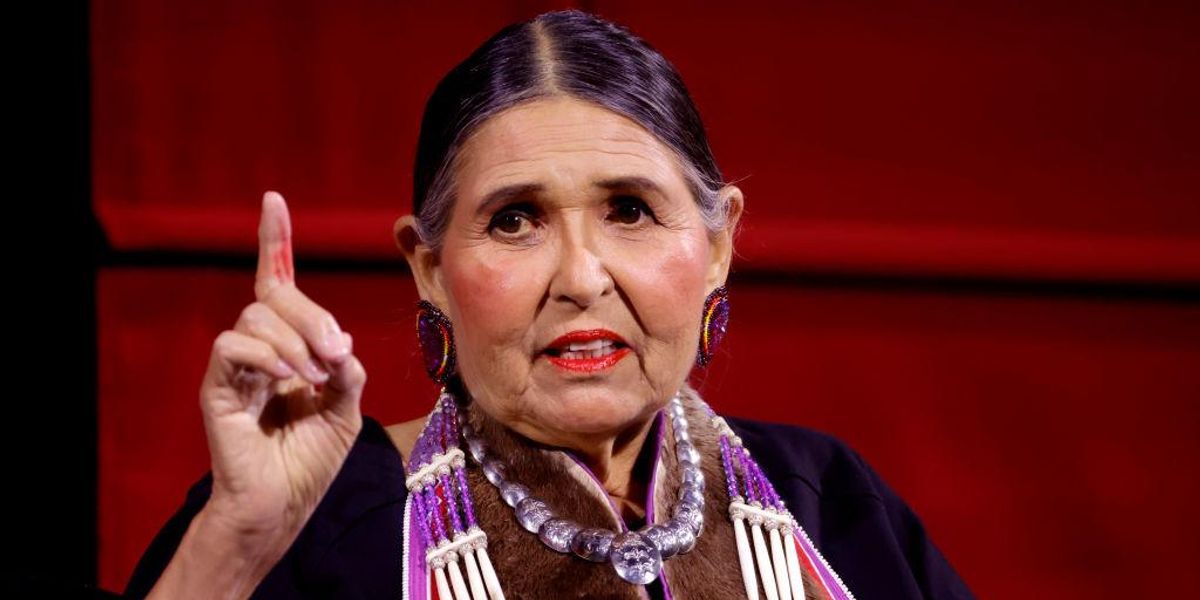 Sacheen Littlefeather rose to notoriety in 1973 as Marlon Brando’s Academy Awards stand-in, denouncing the film industry for its representation of Native Americans. The actress, whose real name was Marie Louise Cruz, died Oct. 2.

Despite Cruz’s claims throughout her life of being an Apache, her sisters indicated that Cruz was instead of Hispanic and European heritage and a “fraud.”

Her claim to fame was refusing the Oscar for Best Actor on behalf of Brando, who didn’t attend the Hollywood ceremony.

“My name is Sacheen Littlefeather. I’m Apache, and I am the president of the National Native American Affirmative Image Committee,” Cruz said as she stood at the podium in a buckskin dress and moccasins.

Cruz said Brando refused the award because of “the treatment of American Indians today by the film industry … and on television in movie re-runs, and also with recent happenings at Wounded Knee.”

Her allusion to Wounded Knee was in reference to the 1973 Incident at Wounded Knee, South Dakota, when armed followers of the American Indian Movement occupied the area for 71 days and shot and paralyzed U.S. Marshal Lloyd Grimm and wounded an FBI agent. The incident, in fact, was still going on during the 1973 Oscars ceremony.

Some audience members jeered Cruz during her brief speech.

Clint Eastwood quipped when presenting the next award, “I don’t know if I should present this award … on behalf of all the cowboys shot in all the John Ford westerns over the years.”

The New Yorker’s Michael Schulman claimed in September that Cruz “was poised and courageous, and the mockery she endured was flagrantly sexist and racist.”

Cruz later claimed that after the event she had been “silenced” and struggled to find work.

Earlier this year, the Academy held a “reconciliation” event for Cruz at the Academy Museum of Motion Pictures.

David Rubin, former Academy president, wrote to Cruz as part of the organization’s apology: “The abuse you endured because of [the Oscar speech] was unwarranted and unjustified … The emotional burden you have lived through and the cost to your own career in our industry are irreparable … We offer both our deepest apologies and our sincere admiration.”

The Academy’s accompanying statement said that Cruz had been “discriminated against for the last 50 years.”

In a statement ahead of the event, Cruz said, “Regarding the Academy’s apology to me, we Indians are a very patient people.”

But according to her sisters, Cruz was the daughter of a Spanish-American and a woman of European descent.

The Guardian, taking Cruz at her word, reported last year that her father “was Native American, a mix of Apache and Yaqui, and her mother was white.”

Cruz’s sister, Rozalind Cruz, had entertained the possibility that their father might have been of “Yaqui and Spanish” descent after all, tweeting as much on Oct. 4, and going so far as to try enrolling in the White Mountain Apache Tribe.

However, nearly one month after printing Cruz’s obituary calling her an “Apache activist,” the New York Times reported that Jacqueline Keeler, a member of the Navajo Nation, produced genealogical research for Rozalind Cruz that placed her application status in doubt.

The research traced the family of Cruz’s father back to Mexico in 1850. There was no evidence of him being a Native American or having any Native ancestry.

Orlandi Cruz told the San Francisco Chronicle that her sister Marie’s claim of Apache heritage is “a lie … My father was who he was. His family came from Mexico. And my dad was born in Oxnard.”

Rozalind Cruz concurred: “It is a fraud … It’s disgusting to the heritage of the tribal people. And it’s just … insulting to my parents.”

Both sisters identify as “Spanish,” suggesting their deceased sister alternatively sought to be an “American Indian princess. It was more prestigious to be an American Indian than it was to be Hispanic in her mind.”

In her research into whether or not Marie Louise Cruz was a “Pretendian,” Keeler found that “all of the family’s cousins, great-aunts, uncles and grandparents going back to about 1880 (when their direct ancestors crossed the border from Mexico) identified as white, Caucasian, and Mexican on key legal documents in the United States.”

None of the ancestors belonging to the woman who called herself Sacheen Littlefeather married anyone reportedly Native American or American Indian.

“Keeler proves Littlefeather was a troubled woman who made the stories of others her own,” Liza Black, associate professor of history and Native American studies at Indiana University, told the Times.

The paper also reported that [N]ila [N]orthsun — a Shoshone poet and friend of Marie Louise Cruz — suggested that Native identity is “what you feel in your heart, and what your belief system is,” seemingly downplaying Cruz’s apparent Hispanic and European heritage.

Keeler was not impressed by this line of thinking, writing that “a U.S. citizen of distant French descent does not get to claim French citizenship. And it would be absurd for that person to wear a beret on stage at the Oscars and speak on behalf of the nation of France.”

Democrat U.S. Sen. Elizabeth Warren (Mass.) is another high-profile individual whose claims of being part Native American were put to the test in recent years.

TheBlaze reported that Warren identified as Native American on her application for a job at Harvard University and hand-wrote “American Indian” in the field for “race” on her State Bar of Texas registration card.

In 2018, former President Donald Trump, who had long derided Warren as “Pocahontas,” challenged the senator to get a DNA test to prove she was Native American. The test results came back showing that she was only 1/1,024th Native American if at all.

Warren touted this result as proof of her membership to the group.

u201cBy the way, @realDonaldTrump: Remember saying on 7/5 that youu2019d give $1M to a charity of my choice if my DNA showed Native American ancestry? I remember u2013 and here’s the verdict. Please send the check to the National Indigenous Womenu2019s Resource Center: https://t.co/I6YQ9hf7Tvu201d

Rachel Dolezal, former head of the Spokane, Washington, chapter of the NAACP and former adjunct professor at North Idaho college, long claimed to have both black and Native American heritage.

In 2015, after years of claiming to be black and teaching African-American studies, Dolezal’s relatives revealed she was, in fact, white. She subsequently admitted that she was “born white” but “I do consider myself to be black.”

CNN reported that in 2002, she had sued Howard University for allegedly discriminating against her, suggesting the school had favored black students over her at a student art exhibition.