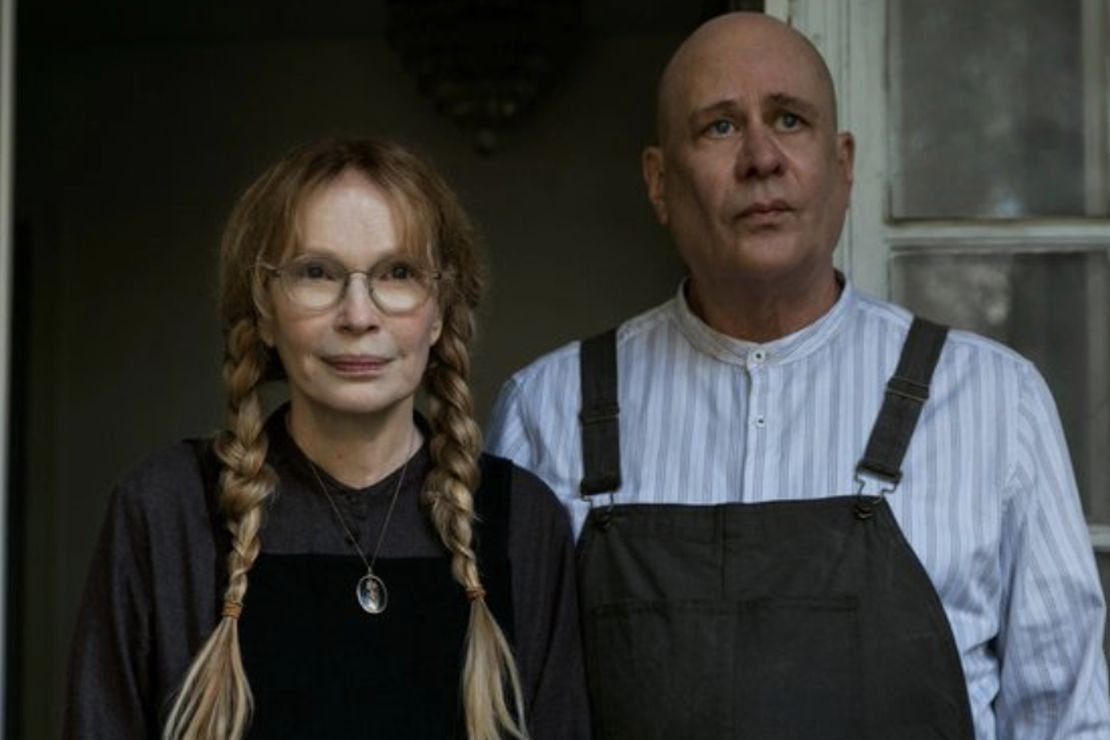 I don’t usually like scary shows. I’m very anti-horror. Who needs gore and jump-scares to freak you out on a dark night? Not me. I know there are lots of you out there who disagree, and that’s okay. But I finally found something on the scary side that is more my speed. “The Watcher” on Netflix is based on a true story about the terrifying events that happened to the Broaddus family (renamed the Brannock family for Netflix) when they bought a huge home in a New Jersey suburb. It’s a mystery that has never been solved. It began with threatening letters that made it impossible for the Broadduses to live in the home because of the fear the letters induced.

Not only could the family never move into the home but they had serious problems selling it once the truth of what was going on got out. In the Netflix version, many liberties were taken to make the story creepier– and they did a great job. Starring the hilarious Jennifer Coolidge as a malicious real estate agent and Naomi Watts and Bobby Cannavale as the duped buyers, this series keeps you on the edge of your seat.

The performances are genuinely believable. The creepy neighbors are equal parts frightening and laugh-inducing. I like my scary stories peppered with comedy, and this one had it all. Mia Farrow stars as one of the creep-show neighbors sporting little girl braids. She is an old nosey crone with an even stranger brother who likes to sneak around the Brannocks’ estate.

Did you know Mia Farrow passed on two Ryan Murphy projects before she agreed to star in #TheWatcher? https://t.co/TDXlpKIksb pic.twitter.com/AX7PSns3hB

Margo Martindale was brilliant as one of the busybody neighbors who just won’t mind her own business. The entire cast is so good, and it’s impossible to figure out whodunnit. There’s just the right amount of jump-scares and creepy scenarios without going over the line for a wimp like me.

Started The Watcher on Netflix.

The cast is STACKED!! pic.twitter.com/mSGMjICJT5

The Brannocks, tired of the crime in New York City, find their dream home in a suburb of New Jersey but begin receiving scary letters almost immediately after moving in. The letters get increasingly terrifying and the police can’t do anything about it. The Brannocks suspect everyone and start getting increasingly paranoid with each passing day. What was supposed to be a new peaceful life turns into a nightmare of intrigue and psychological abuse. Imagine how you would feel if you got a letter at you new home like this!

Allow me to welcome you to the neighborhood. 657 Boulevard has been the subject of my family for decades now and as it approaches its 110th birthday, I have been put in charge of watching and waiting for its second coming. My grandfather watched the house in the 1920s and my father watched in the 1960s. It is now my time. Do you know the history of the house? Do you know what lies within the walls of 657 Boulevard? Why are you here? I will find out.

Do you need to fill the house with the young blood I requested? Better for me. Was your old house too small for the growing family? Or was it greed to bring me your children? Once I know their names I will call to them and draw them to me.

This series is very entertaining and because the real-life mystery was never solved there’s no way to predict the ending. I enjoyed every episode. It’s also surprisingly family-friendly for older kids. There isn’t too much sex or debauchery, only married sex which is the kind I’d prefer depicted onscreen (if we must have TV sex at all). There’s a particularly disturbing event where the teen daughter tells a very damaging lie about her father on social media that could ruin his life. This is an excellent opportunity to have a discussion with your teens about the consequences of words said in anger in the modern age.

Critics of the series are all wringing their hands over the ending, which I’ll try not to spoil (and if you’re worried I’ll fail, skip to the trailer and come back after you watch the series), but in doing so they admit their own lack of imagination. What critics want–a nicely tied up ending with no more loose ends–makes no sense when there’s no real ending in reality. This story is truly one of unanswered questions and the terror of the unknown. Answering those questions would kill the allure. The beauty of real-life mysteries is that everyone has their own theory. This series may have sparked enough interest in this years-old mystery for Internet sleuths to dig up new clues and finally solve it. Wouldn’t that be a fun ending?

There was only one piece of political stupidity in this series when they inserted a “Q conspiracy” into it when they didn’t need to. For a bunch of people who are so offended by the rumors that Hollywood types are all pedophile cannibals, they sure never shy away from putting that exact scenario in their movies and shows. Why do they keep doing this? If they really want poeple to disbelieve the pizzagate theories, perhaps they should stop depicting those exact scenarios onscreen with such gruesome accuracy. It’s almost like they are baiting the Q followers to continue the wild speculation: “See? They tell us what they are doing!” If Q conspiracies are so “dangerous” as the left claims and they shut down and deplatform every person spreading them, why does Hollywood get a pass?

Despite this momentary lapse into Democrat masturbatory material, this series has been one of the most enjoyable I’ve seen in a long time. Well done, Netflix! Enjoy it with your family this Halloween!

Elon Musk says he would back Ron DeSantis for president in 2024
‘I am thankful for the freedom of self’: Women express gratitude for their abortions in piece posted on Thanksgiving
As Georgia Voting Begins, MSNBC Touts Warnock, Hurls Insults at Herschel Walker
Adam Schiff Is Really Angry About The Possibility Of Being Removed From The Intel Committee (VIDEO)
VIDEO: Angry Trans Twitter Censor Speaks Out After She Is Fired from Her Job