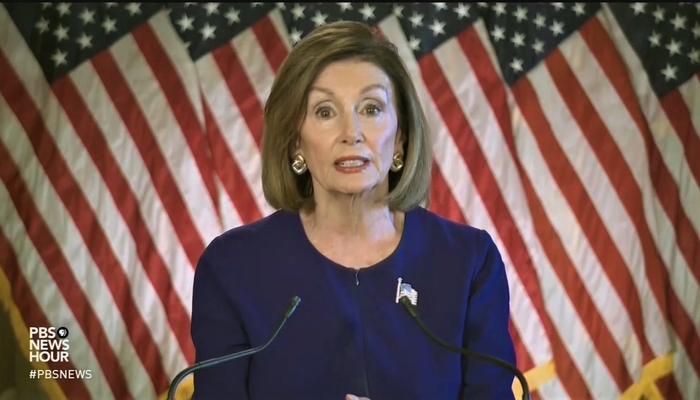 Politico is so intent on suggesting to its readers that evil right-wing Republicans were responsible at least indirectly for the break-in of Nancy Pelosi’s home in which her husband Paul Pelosi ended up in the hospital due to being hammered that they have published on Friday and Saturday not one or two or even three or four stories on this topic but ELEVEN, count ’em, ELEVEN stories at the very top of their home page.

So many stories that only six of them were able to fit in the photo you see on this page. Let us start with the story at the very top of the page which blamed, without real evidence, the usual suspects for the media in general and Politico in particular, “Pelosi attack rattles an already skittish campaign trail.”

The brutal assault on Speaker Nancy Pelosi’s husband Paul inside their San Francisco home early Friday morning reverberated across the campaign trail Saturday, with some Democratic campaigns acknowledging increased threats of violence and some Republican campaigns exercising extra caution in their rhetoric.

In recent years, threats of violence against elected officials have increased, with some members of Congress and elected officials purchasing flack jackets, home security systems and other protective measures in recent months. Republican ads targeting Pelosi and other congressional figures have proliferated nationally and trended more violent.

…“Speaker Pelosi and her family in the space of 18 months have now been attacked at her place of work and at her home,” Massachusetts Rep. Jake Auchincloss told POLITICO in an interview Saturday. “It is a symptom of an unhealthy political culture. And GOP candidates, in particular, need to be mindful of their rhetoric on election night.”

The Congressional Leadership Fund, a Kevin McCarthy-aligned super PAC, mentioned the speaker in at least 29 ads over the past week, according to Democratic strategists tracking the issue.

…Speaking at a Detroit campaign rally on Saturday afternoon, former President Barack Obama called on Republicans to turn down the temperature on violent rhetoric.

“If our rhetoric about each other gets that mean, when we don’t just disagree with people but we start demonizing them, making crazy allegations against them, that creates a dangerous climate,” Obama said. “If elected officials don’t do more … people can get hurt.”

The story right below that one continues with exactly the same theme about dangerous Republican rhetoric, “Attempted attack on Pelosi raises questions on motive, family protections.”

“Evidence now points to an unhinged individual inspired by years of demonization of the Speaker. This is what happens when responsible leaders tolerate the intolerable for political gain,” he added, referring to consistent political attacks levied against Pelosi by Republicans.

Vice President Kamala Harris, campaigning in Baltimore on Saturday, linked the attack to political rhetoric that she said is “promulgating hate.”

“Something has been happening on our country where powerful people, so-called leaders, have been using the bully pulpit that they were given by the people in a way that is about the preservation of their personal power and is being used to divide our country,” Harris said.

Other Democrats were more direct in pointing the finger at their fellow members of Congress for not pushing back forcefully enough in recent years against the rise in threats and political violence.

You would think that two stories at the top of the Politico home page would be enough to hammer home their point that Republicans are somehow dangerous (so please don’t vote for them in the midterms) but that is followed by a completely redundant third story with the same message, “Law enforcement agencies rush to assess new threats to lawmakers.”

…On Capitol Hill, Democrats had long warned that Pelosi, as the subject of unrelenting Republican attack ads and internet conspiracy theorists, was in particular danger. But there was also a larger concern that the modern political and media climates had created a situation in which lawmakers writ large were being increasingly targeted.

Evil nasty nasty Republicans with their unrelenting attack ads. And in case you don’t notice that we have ELEVEN repeating that theme over and over again. And the next completely redundant overkill story in which you-know-who are the bad guys in “Pelosi’s status as GOP campaign-ad villain faces new scrutiny after violent home invasion.”

Republicans have targeted Pelosi, among the highest-ranking women ever to serve in U.S. government, during election cycle after election cycle. Ahead of the 2010 tea party wave election that swept the GOP to the House majority, the Republican National Committee remade its website with a “Fire Pelosi” theme that depicted her in flames. Even from the minority in 2018, she starred in dozens of GOP spots that sought to link her to vulnerable Democratic candidates.

…the GOP’s laser focus on Pelosi, while hardly a new phenomenon, is drawing new criticism in the wake of the violent assault on her husband early Friday morning. The assailant, whose online activity was steeped in conspiracy and baseless allegations about the 2020 election, had been specifically searching for the speaker, according to law enforcement officials — calling out “Where’s Nancy?”

The next Politico story, “Pelosi assault is latest in series of threats, attacks against political figures” was about attacks on public officials which included mostly Democrats as the victims although Steve Scalise was also included since it would have been way too obvious if he were not on the list. However, Senator Rand Paul who was violently assaulted (described in some of the media as a “landscaping dispute”) by a Trump-hating, anti-GOP neighbor was notable by his ABSENCE from the list.

Are you one of the very very few that still hasn’t had your fill of this topic. No problem since “Pelosi’s San Francisco home has long-drawn unwanted attention” can provide you with more of the same. Still a glutton for yet more? Well, take a dive into the world of baddy baddy Republicans in “Democrats lash out at GOP after Pelosi assault.”

A growing number of Democrats are openly blaming Republicans for failing to rein in a rise in violent rhetoric in the wake of an assault on Speaker Nancy Pelosi’s husband, who survived with serious injuries.

“A far right white nationalist tried to assassinate the Speaker of the House and almost killed her husband a year after violent insurrectionists tried to find her and kill her in the Capitol,” Rep. Ilhan Omar (D-Minn.) said on Saturday morning. “And the Republican Party’s response is to either ignore it or belittle it.”

As police continue to investigate the attack, several of Pelosi’s fellow Democrats are pointing fingers at their opponents in Congress — accusing Republican leaders of largely sidestepping the issue of political violence and rising threats for years. Some also called out what they saw as a lackluster public response to the assault, including from House Minority Leader Kevin McCarthy (R-Calif.).

In case you still haven’t figured out who Politico feels the villains are, they slam it home yet again with “Pelosi attacker was immersed in 2020 election conspiracies.”

A man accused of breaking into the home of House Speaker Nancy Pelosi and attacking her husband inhabited a vivid and resentment-fueled world of conspiracy while living a fringe existence even by the standards of the open-minded San Francisco Bay Area. David DePape, who is in custody and facing charges that include homicide and elder abuse for the attack on Paul Pelosi at the couple’s home, also appears to have embraced falsehoods about the outcome of the 2020 election and political conspiracies, according to his social media and online posts.

The connection to the election falsehoods promoted by former President Donald Trump and his supporters immediately led many to conclude that the 42-year-old DePape was motivated by politics — though police have not said what motivated him to break into the couple’s Pacific Heights house calling out “Where’s Nancy?” before dawn Friday.

Got that? The police have not yet determined the motive for the perp yet Politico is not the least bit shy to shout out their theory including this tidbit in “Paul Pelosi told attacker he needed to use the bathroom, called 911 from there.”

Virginia Gov. Glenn Youngkin, while campaigning with GOP congressional candidate Yesli Vega, told an audience of Paul and Nancy Pelosi: “There’s no room for violence anywhere, but we’re going to send her back to be with him in California.”

And not every Democrat was satisfied with the warm words after Friday’s traumatic attack.

“We know what has fueled this: It is years of vitriol and disinformation,” Dean said, citing GOP leaders who have allowed politically motivated lies, including those about the validity of elections, to become mainstream. “What we have sown is what we are reaping.”

Politico columnist Jeff Greenfield tries to rise above the fray in “America’s Darkest Forces Are Being Unleashed” but ultimately blames GOP especially since it is just a little over a week until the midterm elections:

Some on the right, like Arizona gubernatorial candidate Kari Lake, made the remarkable assertion that Paul Pelosi’s assault is tied to “leftist elected officials” creating an atmosphere that fuels crime. The fact that the accused assailant filled social media with conspiracy theories about the 2020 election and Covid-19 was an inconvenient detail.

More importantly, the attack underscores the possible dangers of the escalation of heated political rhetoric, overwhelmingly, but not exclusively, from the right.

The eleventh and final (for now) Politico story, “Where Will This Political Violence Lead? Look to the 1850s” is perhaps the nuttiest of them all. Joshua Zeitz somehow manages to segue from the Pelosi home break-in to January 6 and then to the Jim Crow era and then further back to the Fugitive Slave Act of 1850 then forward a bit to the Kansas Nebraska Act of 1854 before bouncing around all over the 19th century. You have to pinch yourself to remember that this was all because of a Pelosi home situation for which the police have yet to determine the motive. But hey, at least it resulted in a really an overlong history lesson from someone obviously really really worried about the outcome of the midterm elections.

Oh, and if the motivation for the incident turns out to be NOT political, will Politico publish ELEVEN correction stories on its home page?

James Woods To Sue Twitter Over DNC-Ordered Censorship
DELUSIONAL: Hillary Clinton likens PRO-LIFE movement to using ‘rape’ as a ‘tactic of war’
Mom of bullied child forced to shell out $7K for school district’s public records on bullying incidents
WHO converging on Dec. 5-7 to discuss new “Pandemic Treaty” that would unleash a global medical dictatorship
Here’s What Happened in Georgia During the Runoff