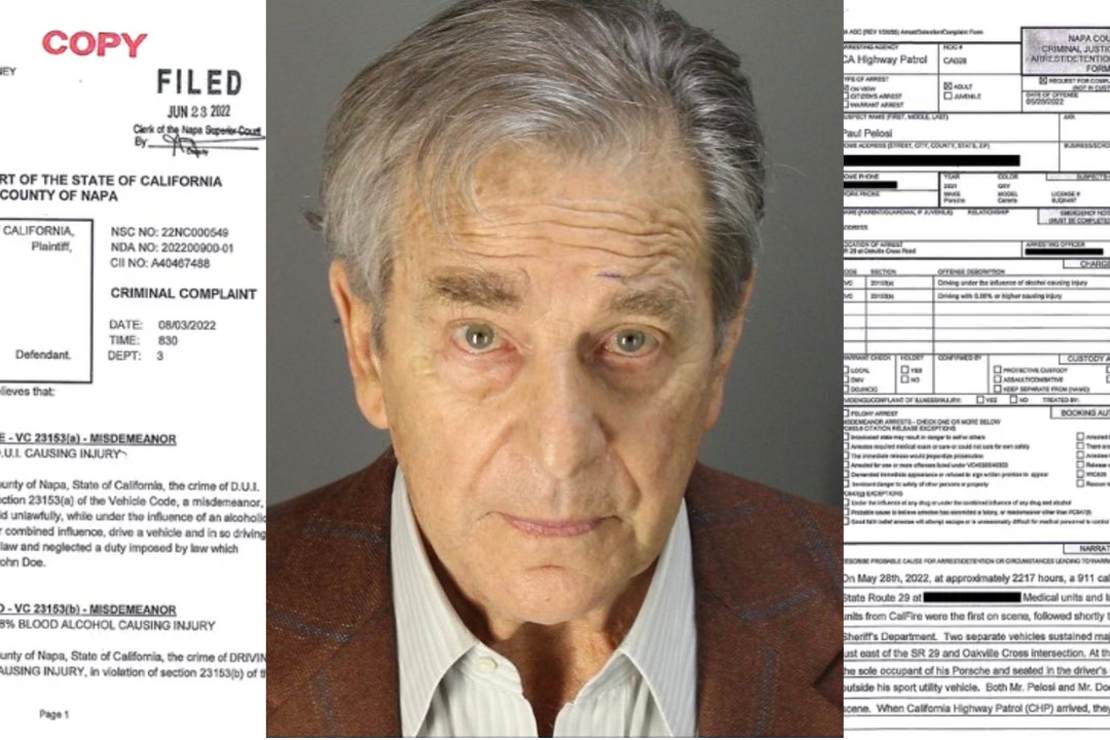 By now you’ve heard about the attack on House Speaker Nancy Pelosi’s husband at the couple’s San Francisco mansion on Thursday. It was horrible and should be condemned. Indeed, we at PJ Media condemn all crime, especially when it involves Hunter Biden and his grifting Dad.

But the incident smells as bad as one of David DePape’s blunts, which he apparently was fond of smoking — often. Indeed, his ex told KRON that DePape’s “drug use began again and he went off his rocker.”

The 42-year-old DePape lives in a Berkeley nudist collective, and his lawn is a boneyard for every Leftist political cause over the past few years. Indeed, his ex says that, if anything, he was progressive. He is part of a group of naked men “activists” who prance about the streets of the Castro District daring anyone to be offended. These activists sit on the public benches and restaurant seats in the Castro pretending their activities are totally normal. Indeed, these activists hope people mistake their perversions for Rodin statues. Or something.

State Sen. Scott Wiener, a San Francisco Leftist activist who helped give cover, so to speak, to the naked men’s antics before his tolerance for all things kinky backfired on him, knew DePape. “I’ve been aware of him for a long time because he was associated with the public nudity folks in the Castro. It’s a long history with him,” Wiener told KRON.

Wiener got so much blowback for this dumbassery that he introduced the “skid mark law,” which required his friends to place a barrier on the chairs and benches before being seated.

DePape “has picketed naked at protests against laws requiring people to be clothed in public. An Associated Press photographer shot images of DePape while he was attending and recording video of a nude wedding outside San Francisco City Hall in 2013.”

As Robert Spencer noted in his PJ Media column on the case, DePape’s ex-partner, Gypsy Taub, is a real gem who provided insights on the attacker from a phone at the prison where she’s serving time for trying to kidnap a 14-year-old boy.

Taub, a “nudist activist,” called San Francisco’s KGO and said: “Hello this is Gypsy Taub. I am the ex-life partner of David DePape and the mother of his children.” She was calling from the Californian Institution For Women in Corona, California; KGO explains that she was found guilty last year “on 20 counts, including the attempted abduction of a 14-year-old boy near his Berkeley high school.”

Taub of David DePape: “He is mentally ill. He has been mentally ill for a long time. He came back in very bad shape. He thought he was Jesus. He was constantly paranoid, thinking people were after him. And it took a good year or two to get back to, you know, being halfway normal.” If he ever did.

Clearly, this is MAGA country. And clearly, these are MAGA people. We know so because the Los Angeles Times reported that this mentally ill progressive — a redundancy — shares the same name as a blogger who wrote positive words about QAnon conspiracy theories. Who knows, maybe it is the same guy. Thing is, Paul Pelosi’s “friend,” as Mr. Pelosi identified him to the police when he called 911 and identified him by name, seems himself to carry the whiff of the kind of people that Q dude warned you about.

Here’s how the dispatcher sent out the call to go to the Pelosi’s home.

Paul Pelosi’s 911 call reveals he knew the man, his name is David and describes him as his friend.

In the beginning he said he didn’t know him but later, Paul confessed.

The Pelosi’s are not being honest. Retweet so everyone sees this. pic.twitter.com/zRozccWceq

It would be helpful if we could hear Paul Pelosi’s own phone call and not just the dispatcher’s translation. And there is probably a good reason why we haven’t. “The RP [reporting party, Paul Pelosi] sounded somewhat confused,” the dispatcher told officers rushing to the scene. It was 2:30 a.m., after all. It must have been a rough night for an elderly man. Pelosi also might have been under the influence of some substance as he has been known to do. We’ve got the mugshot to prove it.

Also: “voters seem poised to pass the most restrictive gun laws in the nation (we’re number one!) and create what is tantamount to a gun registry.”https://t.co/e92UeBn64U

As officers took stood on the front porch, they “observed Mr. Pelosi and the suspect, each with one hand on a single hammer.” Officers ordered “both men” to drop the hammer. But then DePape took control of the hammer “and violently assaulted Mr. Pelosi with it.” I reiterate: this occurred in front of the cops. They could have dropped or tased DePape to save Pelosi but didn’t do that. Was this because it was out of deference to Pelosi’s “friend?”

And the brass gave high praise to the police dispatcher who intuited “that there was something more to this incident than we were being told” and put it out as a high-priority call.

Police confirmed that DePape forced entry through a back door and yelled, “Where’s Nancy?” inside the house.

DePape will be in court on Monday and faces an assortment of charges, including elder abuse and attempted murder. This too will be another anomaly in the City by the Bay, which is infamous for not prosecuting even the worst of criminals.

And who knows, maybe we’ll find out the real reason Captain Underpants was inside the Pelosi mansion.