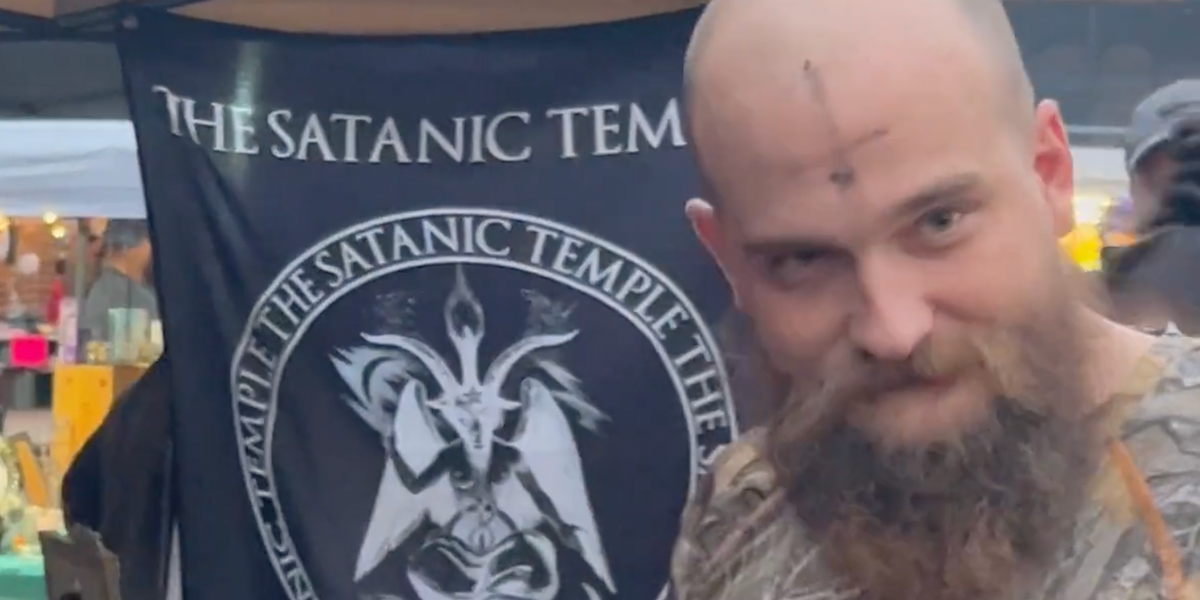 Although the event’s organizer Raynie Castañeda claimed the second annual Pagan Pride Fest in Tyler was “not satanic,” it nevertheless saw droves of people pay to renounce their religious beliefs and hail the devil.

‘Not doing anything satanic’

According to an event listing, the aim of the festival was to “gather & celebrate ourselves in the center of town, on our Good Old Square, which has historically been the place of our town’s atrocities against BIPOC, LGBTQ+, Pagans, and any non-Christian folk. We reclaim this space in Honour of Ourselves, or our Gods, or our Ancestors,”

The Satanic Temple was among the groups present at the event, and its activists — wearing demonic masks and robes — charged passersby $10 for “unbaptisms” in which participants renounce “superstitions that may have been imposed upon them without their consent as a child.”

Here’s a clip of people receiving inverted cross symbols on their foreheads and reciting “Hail Satan!” as part of the unbaptisms:

u201cThe Satanic Temple is performing u201cunbaptisimsu201d. nnAfter an upside down cross is drawn on their forehead they chant u201cHail Satanu201d.u201d

The so-called unbaptized also given certificates stating, “All bonds of servitude have been broken. Power and agency have been restored. Thyself is thy master. Hail Satan!”

Despite its name, the Satanic Temple shares more in common with leftist atheists in attendance Saturday. The group claims it does “not promote a belief in a personal Satan. To embrace the name Satan is to embrace rational inquiry removed from supernaturalism and archaic tradition-based superstitions.”

While the Satanic Temple claims to reject “superstitions,” it nevertheless shared the square with non-Christian “spiritualists” and self-proclaimed witches who invoked gods, ancestors and “spirits in a moment of healing and understanding.”

When asked about their purpose for coming, one attendee told independent journalist Tayler Hansen that she wanted to “bother Christians”:

u201cI talked to a mother and her child that were in attendance at the Satanic Temple event in Tyler, TX today. nnThe daughter stated that she u201cwants to bother Christiansu201d.u201d

The event’s anti-Christian zeal was evidenced by some of the attendees’ costumes and imaging, which mocked priests, nuns, and beliefs held dear by approximately 63% of the American population.

Hansen also shared video of several individuals working to drone out the sound of one man’s prayers during the “unbaptism” ritual:

u201cMembers of the Temple Of Satan are dancing and cackling around a man praying for the attendees of the u201cUnbatismu201d event.u201d

A group of east Texas Christians gathered to pray ahead of the event, KVEO-TV reported.

“As a Christian, we’re called to a spiritual battleground, and I think this is an opportunity to exercise our strength in our relationship with Christ,” Lauren Ethredge-Langas, a member of the Church of the Pines, told the station.

Lauren noted to KVEO that she and others sought only to “pray and exercise our freedom of religion.”

Pastor Donnell Walder of the W.O.W. Church underscored to the station that the Christian presence ahead of the Pagan Pride Fest was not combative: “We didn’t come down to bash anyone’s religion, but we wanted to stand as believers and pray.”

Hansen documented a prayer procession and public blessing attended by a local Catholic group and led by Bishop J. Strickland:

u201cA local Catholic group blessed the grounds prior to the Satanic Temple event that was hosted in Tyler, TX today.u201d

Brandon and Kelsey Chrisman — members of the Gospel Barn in Troup — told the Tyler Morning Telegraph they were “just showing love and trying to bring light to the darkness as much as we can. We’re not here to judge — just love.”

Are Evangelicals Turning on Trump?
Elon Musk may reveal what happened behind the scenes of Twitter’s pre-election censorship of the Hunter Biden laptop story
Why Isn’t Iran Cracking Down Harder on the Protesters?
Grand jury finds ballot fraud in NYC city council race – and releases report calling for changes to state election laws
Biden Must Be Called Out for Unbanning TikTok