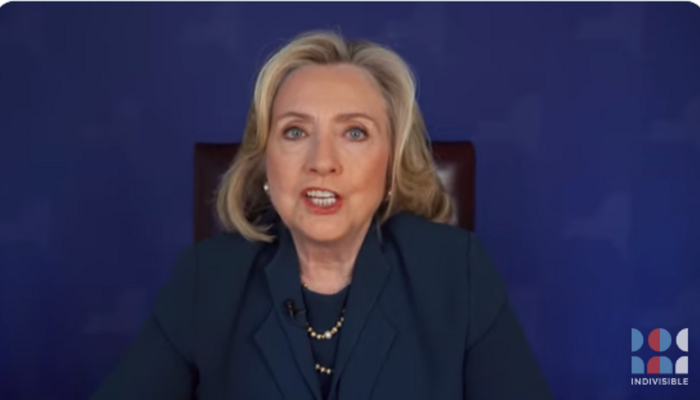 One of the dominant themes in current liberal messaging is that democracy is endangered by waves of “misinformation” and “conspiracy theories.” But aren’t liberals occasionally guilty of uncorking wild conspiracy theories that don’t turn out to be true?

An obvious sore point is the liberal notion that Donald Trump colluded with the Russian government to steal the 2016 election – a conspiracy theory so strong that the media obsessed over it for years, until Special Counsel Robert Mueller concluded that it didn’t really exist.

On October 21, a leftist group called “Indivisible” put out a video with Hillary Clinton claiming “right-wing extremists” were plotting a coup in 2024.

“I know we’re all focused on the 2022 midterm elections, and they are incredibly important,” Mrs. Clinton said. “But we also have to look ahead because — you know what — our opponents certainly are. Right-wing extremists already have a plan to literally steal the next presidential election, and they’re not making a secret of it.”

It came with a website – CrushTheCoup.org. There, in all capital letters, they warned: “MAGA has a plan to steal the election in 2024. We have to stop them, today.” The conspiracy is that our radical Supreme Court will decide that state legislatures can overturn election results.

Hillary Clinton says Republicans already have a plan to steal the 2024 election. I’m old enough to remember when this kind of talk was a direct threat to our sacred democracy. Hope she enjoys the red wave in two weeks: pic.twitter.com/gGpDQFGUlb

Here’s how you can tell this video (with three million views on Twitter) is embarrassing to the liberal media, who bray daily about “election deniers” and “Stop the Steal” wackos. Hillary’s echo was not helpful to their narrative. So it was overwhelmingly skipped.

How is this not newsworthy, considering Hillary Clinton was the 2016 Democrat nominee for president, and insisted when she lost that Trump was an “illegitimate president”? Searching through Nexis, you find ABC ignored it, as did NBC, and PBS, and NPR, and even MSNBC. Then turn to print journalists. The Associated Press ignored it! The New York Times, The Washington Post, and USA Today couldn’t locate this clip.

“I’m glad you said that because there’s been a lot of attention drawn to comments by some Democrats, including Hillary Clinton, who just released a taped statement online where she was talking about upcoming elections and she said, right-wing extremists already have a plan to literally steal the next presidential election, and they’re not making a secret of it.” Brennan asked “I understand hyperbole, but would you agree that’s not helpful in the current environment to talk about plots to steal elections?”

Maloney professed: “I don`t understand what that means and I didn`t see the comment.”

Also on Sunday, Sen. Rick Scott (R-Fla.) brought it up in passing on CNN’s State of the Union: “We have got Hillary Clinton saying the ’24 elections could be stolen. We have got Stacey Abrams saying she didn’t lose.”

On Halloween, journalists on CNN’s Inside Politics finally addressed it – only to dismiss it. CNN host John King played the brief clip of Scott – not any film of Hillary – and proclaimed, “But if you want to say that those things are wrong, let’s say they are misdemeanors down here compared to saying the January 6 defendants are being persecuted.” CNN reporter Manu Raju agreed, saying “if you’re going to criticize what Hillary Clinton said about 2024, perhaps make a point of the fact that Donald Trump has been making this the centerpiece of everything.”

But that’s their problem. Hillary sounds like Trump. So the media can’t honestly acknowledge that it exists.

Has Your Tax Service Been Selling You Out to Facebook?
BREAKING: Bolsonaro’s Party in Brazil Files Legal Complaint Challenging Lula’s Election Steal
‘You’re burning the wrong witch’: Writer who set out to do piece on ‘Transphobic JK Rowling Quotes’ abandons it after failing to find ‘a single truly transphobic message’
GUNNING FOR US: Biden admin continues arming more federal agents than members of the U.S. military: Why?
Comedian Jamie Kilstein’s 3-step guide to SURVIVING Thanksgiving with family