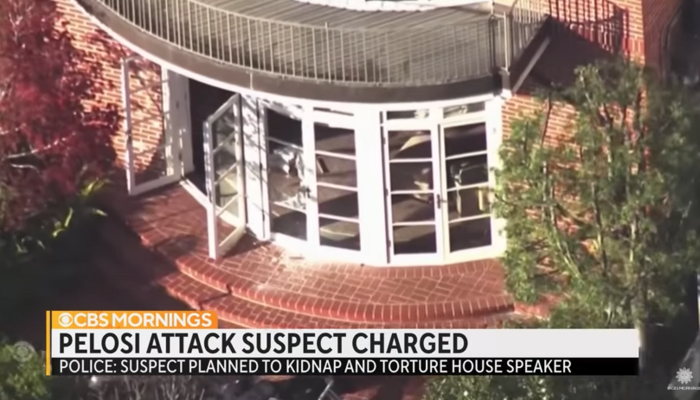 The shocking attack at the San Francisco home of House Speaker Nancy Pelosi gave The New York Times all the excuse it needed to blame violent Republican rhetoric.

Reporter Catie Edmondson launched the blame game in Sunday’s edition with “Pelosi Attack Highlights Increasing Fears of Violence Incited by Politics,” blaming not the deluded home invader himself, but some mean things Republicans have said about Pelosi over the last two decades:

And it highlighted how Ms. Pelosi, the first female speaker of the House of Representatives and a longtime fixture of Democratic politics, has been increasingly demonized by Republicans….

The paper expanded on the idea with an 1,800-word story on the front of Monday’s edition. Reporters Annie Karni, Catie Edmondson and Carl Hulse teamed up under a headline meant to confirm GOP guilt by association: “Nancy Pelosi, Vilified by G.O.P. for Years, Is a Top Target of Threats.”

In 2009, the Republican National Committee ran an advertisement featuring Ms. Pelosi’s face framed by the barrel of a gun — complete with the sound of a bullet firing as red bled down the screen — a takeoff on the James Bond film “Goldfinger” in which the woman second in line to the presidency was cast as Pussy Galore.

The attack on Ms. Pelosi’s husband, Paul Pelosi, on Friday, which left him with a fractured skull and appeared to be part of a planned attack on the speaker herself, came after a yearslong campaign by Republicans to demonize and dehumanize Ms. Pelosi in increasingly ugly ways.

For the better part of two decades, Republicans have targeted Ms. Pelosi, the most powerful woman in American politics, as the most sinister Democratic villain of all, making her the evil star of their advertisements and fund-raising appeals in hopes of animating their core supporters. The language and images have helped to fuel the flames of anger at Ms. Pelosi on the right, fanned increasingly in recent years by a toxic stew of conspiracy theories and misinformation that has thrived on the internet and social media, with little pushback from elected Republicans.

One does not see this intensity of Times outrage after Republican politicians are attacked by ideologically motivated (as opposed to just crazy, like Pelosi’s attacker) men like James Hodgkinson, who shot at Republican congressmen on a baseball field in 2017, gravely wounding CongressmanSteve Scalise (R-LA).

Republican Senator Rand Paul of Kentucky has been physically attacked on at least two occasions, to the despicable mirth of leftist Twitterati and even Democratic U.S. Senate candidates. He certainly hasn’t received any Pelosi-style sympathy cards from The Times.

The paper unwittingly outed itself as left-wing, lamenting that “[t]he vilification of Ms. Pelosi increased in recent years, when she emerged as the Democrats’ most potent foil to Mr. Trump” with Trump having “branded her ‘crazy as a bedbug’” while, in contrast, “the left turned her into a sunglasses-wearing icon”.

But The Times itself twice turned Pelosi into a “sunglasses-wearing icon” in its news pages, both courtesy of reporter Sheryl Gay Stolberg, following a “triumphant” Pelosi confrontation with Trump in the Oval Office. Stolberg gushed the Speaker’s “power stride out of the White House that day, in dark sunglasses and an orange coat, turned Ms. Pelosi into a fashion trendsetter.”