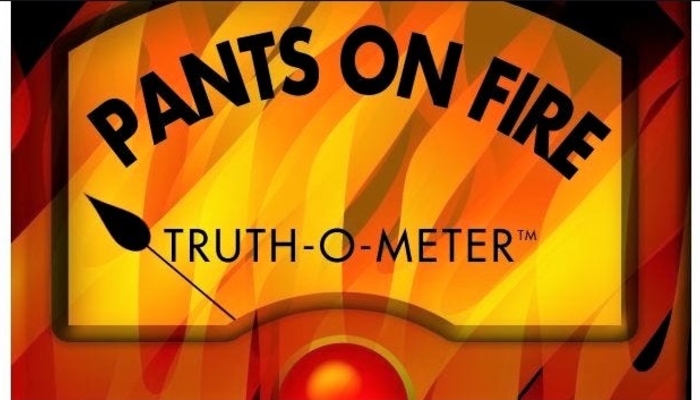 Something unexpected happened on Wednesday. PolitiFact gave Joe Biden his first “Pants On Fire” rating as president….twenty-two months into plenty of transparent lies, starting with the Republicans are “Jim Crow 2.0” on election laws. This was the sentence they flagged as a lie from a Tuesday speech:

“On my watch, for the first time in 10 years, seniors are getting an increase in their Social Security checks.”

This briefly topped the home page: Louis Jacobson summarized the long-standing Cost of Living Adjustment reality:  “Social Security recipients have received increases in their checks in the form of inflation adjustments for nine of the past 10 years. The adjustments are based on a key inflation measure, as mandated by a 1972 law.” He soft-pedaled a bit in saying Biden “went factually overboard praising his own actions on Social Security.” Then he summarized the White House reaction:

The White House did not respond to our request for an explanation of Biden’s remarks.

The White House also made a separate but similar statement on Twitter that prompted criticism.

“Seniors are getting the biggest increase in their Social Security checks in 10 years through President Biden’s leadership,” the White House said in the tweet, which it later deleted after Twitter attached a note saying the tweet lacked context.

For the record, Donald Trump also received a “Pants On Fire” check on Wednesday, for the claim that at Paul Pelosi’s house, “the glass it seems was broken from the inside to the out, so it wasn’t a break-in, it was a break out.” That is Trump’s 11th “Pants on Fire” since the Biden inauguration.

This is actually tougher than PolitiFact’s historical average for Biden. Overall, since they began in 2007, PolitiFact has published 244 Biden checks, and 103 of those were “Mostly False” or worse (42 percent).