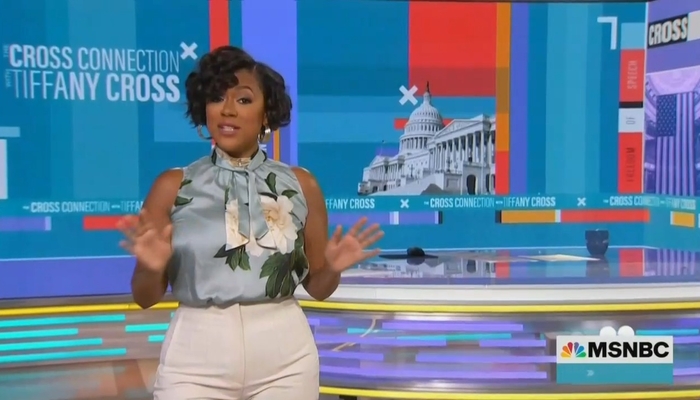 When you’re too crazy for MSNBC, you know you’ve lost it.

MSNBC host Tiffany Cross has been officially let go and her tenure at the network was a crazy one. She filled her shows with disgusting attacks on Pro-Lifers who “dance with the Devil” and “sell-out” Black Americans like Senator Tim Scott and Supreme Court Justice Clarence Thomas who dared to be conservative.

There were also the perfunctory attacks on “traitor” Donald Trump and his “Klan-like” base of supporters.

The following are just some of the most obnoxious outbursts from the now-canceled Cross:

“I watched the Republican convention, and seeing the slew of black speakers that they had, it really did look like a modern-day minstrel show to me.”
— Host Tiffany Cross on MSNBC’s AM Joy, August 30, 2020.

“Something I discovered, a lot of younger viewers may not know, Clarence Thomas was actually married to a black woman, he has a son named Jamal, and now with his new wife, with Ginni Thomas, his, he’s always been problematic in his thoughts, he seems to have fallen deeper into the sunken place with this woman running a puppet regime it appears, being, aiding Donald Trump and breaking the law. How is it possible that Judge Thomas can continue to serve on the Supreme Court?”
— Host Tiffany Cross on MSNBC’s The Cross Connection, April 2, 2022.

Corporations Must Choose, Dance With the Pro-Life “Devil” or Pro-Abortion “Lord”

“As the country begins to grapple with the realities of Roe v. Wade being overturned, some companies have seemed to be stepping up. AT&T, Disney, Microsoft, and Amazon are all among those who have publicly pledged to cover their employees’ travel expenses so that they can access abortions uninhibited. But all four companies have also donated to supporters of state abortion bans, the very laws that will make such travel necessary….What role does the private sector play in even creating this landscape, and what’s their responsibility in fixing it? Because you can’t dance with the Devil and the Lord at the same time.”
— Host Tiffany Cross on MSNBC’s The Cross Connection, July 2, 2022.

“An AR-15 Has More Rights Than a Woman Does”

“Good morning everybody and welcome to Gilead. Oh, I mean The Cross Connection. Today, for the first time in 49 years, American women are waking up with less rights than we had yesterday….The majority of Americans did not want the Court to overturn Roe v. Wade. A majority of Americans. But four men, who will never bear children, and one Handmaiden, decided for an entire country that their Christian doctrine is the only way….A woman’s right to choose is a human right….but in America, where guns are the leading cause of death for children, an AR-15 has more rights than a woman does.”
— Host Tiffany Cross on MSNBC’s The Cross Connection, June 15, 2022.

Host Tiffany Cross: “This week, the sole black Republican in the Senate sounded a stone fool when he said this.”
[Clip of Senator Tim Scott: “Hear me clearly — America is not a racist country.”]…
Cross: “Tim Scott does not represent any constituency other than the small number of sleepy, slow-witted sufferers of Stockholm syndrome who get elevated to prominence for repeating a false narrative about this country that makes conservative white people feel comfortable….A lesson I’ve learned is: Don’t argue with people Harriet Tubman would have left behind. And, sure, Tim Scott has spoken out about his encounters with law enforcement….but there are two sides to every token, so thirsty for white approval, this dude actually stood on the national stage to defend the voter suppression law in Georgia…The ability to shame the ancestors and appease the oppressors all in one speech, that’s extreme….Perhaps this was merely Tim Scott’s audition to be Sam Jackson’s understudy in the film Django.”
— MSNBC’s The Cross Connection, May 1, 2021.

Trump Appealing to His “Klan-Like Base”

Host Whoopi Goldberg: “Two days ago, the guy in the White House said in an interview that white people are killed by the police more than anyone else, and flying the Confederate flag is freedom of speech.”…
MSNBC’s AM Joy substitute host Tiffany Cross: “I think of the horrific brutality black people have faced at the hands of law enforcement, I wonder what would possess a President to say something like that, and it’s really because he’s tossing red meat to his klan-like base that he needs so desperately to win in November.”
— ABC’s The View, July 16, 2020.

“I think a lot of people do want to see you know, Donald Trump, you know, handcuffed like an episode of COPS and walking out….We want to see a perp walk, Donald Trump!…This could really be a situation where you’re a traitor! He is actually a traitor to America….If it is confirmed that he was trafficking our information around nuclear weapons, which is a huge deal, what might the punishment for something like that be?”
— Host Tiffany Cross on MSNBC’s The Cross Connection, August 13, 2022.

“Donald Trump chose the most grandiose symbol of U.S. imperialism on Earth to usher in a very on-brand, star-spangled spectacle, complete with fireworks and military flyovers. It was Trump’s predictable way of throwing red meat to his base — the cult-like following he so desperately needs at the ballot box as he tanks in the polls. But let’s talk some truth here. Mount Rushmore isn’t exactly the innocent ode to our Founding Fathers as described in our textbooks. And it’s high time we disrupt that false narrative that far too many people believe.”
— Substitute host Tiffany Cross on MSNBC’s AM Joy, July 4, 2020.

“We must wonder, will this democracy survive? Well, a Yahoo News poll says, no. But, perhaps when you build a nation on stolen land, with stolen labor, it was never going to be a republic we could keep.”…
“We’re looking at these images [from the James Webb telescope]. I realize that these are billions of galaxies and stars that we’re seeing. And so it seems ridiculous that we would think we’re the only life here….And if there is somebody else, if you know about some secret planet that you’re trying to keep for yourself, and not tell us, why, let me know. Because we’re planning our escape route in this country right now, I tell you.”…
“I think a lot of the black soldiers who joined the Army, hoping that would gain them some respect in this country they were defending, found that white supremacy was more difficult to topple than Hitler’s army itself. And that’s the sad part that we’re still experiencing in this country.”
— Host Tiffany Cross on MSNBC’s The Cross Connection, July 16, 2022.

“Dimwitted” Justice Alito and His Anti-Abortion “Terrorists” Should Shut Up

“Justice Samuel Alito notes that some amicus briefs have argued that supporters of abortion rights really just want to suppress the size of the African-American population….Right. So, the man who helped gut voting rights, and uphold the jurisprudence of white racial innocence is now suddenly moved to protect black life. And of course he offers no context here, because while brevity may be the soul of wit, it is also clearly the soul of the dim-witted….You heard [Executive director of SHERO of Mississippi] Michelle [Colon] refer to the anti-abortionists as terrorists. And she has a point. Because the people who call themselves quote-unquote pro-life, they achieved this through violence….My big point is, if you don’t have a uterus, please shut the entire you-know-what up. It really doesn’t concern you.”
— Host Tiffany Cross on MSNBC’s The Cross Connection, May 7, 2022.

GOP Going to “Bleed” Democracy to Death By “A Thousand Cuts”

“I look at what’s happening in Ukraine, and I see, you know, democracy can be a fragile thing, and it feels a bit fragile in America right now. We’re seeing, you know, the Republican Party bleed it by a thousand cuts with rampant voter suppression.”
— Host Tiffany Cross on MSNBC’s The Cross Connection with Tiffany Cross, March 5, 2022.

Pro-Life Women Are Hypocrites For Not Voting for Lib Spending

“Progressive movements have been hacking away at this pocket of white women who vote overwhelmingly Republican. Yet, there are still a significant many who, under the guise of conservative Christianity, who vote against things like universal pre-k for everybody, but are definitely for taking a woman’s right to choose away from them.”
— Host Tiffany Cross on MSNBC’s The Cross Connection, October 2, 2021.

“They Really Must Hate Women In Texas”

“Texas’s new abortion law….sounds like something straight out of Gilead…. This entire thing about protecting the fetus….It just feels like they really must hate women in Texas, and all across the country….We have an actual Handmaid [Justice Amy Coney Barrett] on the Court….We know all too well what happens when dangerous white men are in power, and decide to exert that power over those of us who are not in power.”
— Host Tiffany Cross on MSNBC’s The Cross Connection, September 4, 2021.

“When it comes to the Supreme Court, I’m terrified that the Supreme Court may actually overturn Roe v. Wade. I know this argument has been going on for a long time. There’s a real live handmaiden on the Supreme Court. It feels like we’re 10 minutes from living in Gilead. Do you think the Supreme Court will take up this case and potentially overturn a law that was so consequential in 1973?”
— Substitute host Tiffany Cross comparing Supreme Court Justice Amy Coney Barrett to characters on Hulu’s The Handmaid’s Tale as aired on MSNBC’s TheReidOut, July 23, 2021.

“This is clearly not a system that can be reformed, and I just — what can we do to stop this? Because it feels like it’s just time to, to burn it down, you know?…How do we organize ourselves out of this quagmire? They’re attacking our voting rights. They’re attacking our lives and livelihoods. They’re killing us if they’re not over-criminalizing us and putting us in jail. As a longtime organizer what is it that we do? Because I have to say, as a people, for my people, I am up for the most radical of things to make sure that we live.”
— Host Tiffany Cross on MSNBC’s The Cross Connection, May 22, 2021.

“This appears as though we are in a national security crisis. If this President is just saying, ‘I won’t go. I’m calling the election fraudulent and I will not leave the White House.’ Will we see this President dragged out on the White House lawn like a 1980s episode of Cops?”
— Host Tiffany Cross on MSNBC’s AM Joy, November 14.

WATCH: CNN Stunned As Their Narrative on Gay Club Shooter Gets Crushed
2,500 Australians Strip Naked for a Photoshoot to Raise Awareness About Skin Cancer (VIDEO)
Google and Meta caught harvesting your sensitive financial information through tax prep software
Resident Shoots and Kills 1 Suspected Intruder and Wounds 3 Others During Home Invasion
Alex Jones is Releasing His Own Bourbon Called ‘Conspiracy’