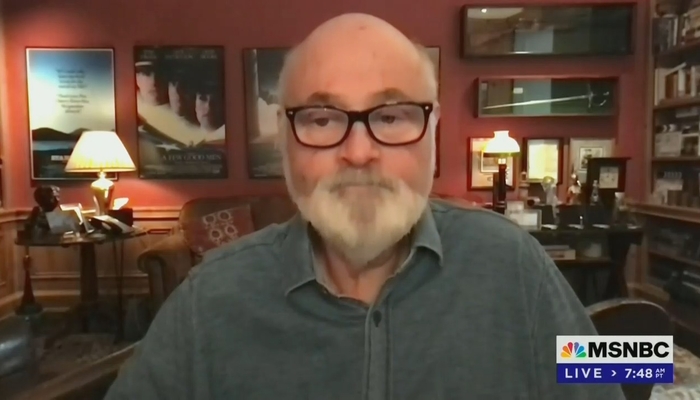 We don’t have a Mainstream Media. We have a Meathead Media.

Actor and director Rob Reiner captured the paranoid style of the press in summarizing the latest nationally televised Republican-smearing speech by our president.

President Biden couldn’t have been clearer. These midterms will determine whether we want to preserve our 246 year Democratic experiment in self rule or surrender to the Tyranny of Fascism.

This kind of deranged speech is treated as conventional wisdom. Everyone is supposed to understand that you should feel compelled to vote straight-ticket for the Democrat Party, because the Republicans are the Tyranny Of Fascism Party.

“Democracy is on the ballot,” our president says, which heavily implies voting against his wishes is voting for the end of the American experiment. It would be a vote for autocracy, or monarchy. Democrats somehow cannot see that this carries the echoes of autocracy, or monarchy. They tell voters they don’t have actual choices on the ballot. It should be a one-party state, or democracy dies.

They want to run our country exactly the way they have run the House January 6 Committee. There are two legitimate political parties, the Democrats, and the Cheney-Kinzinger Republicans. Both are deeply committed to the belief that the actual Republican Party should be dismantled.

The press has presented this argument in a very undemocratic way. No one questioning the committee’s hearings or rulings deserves to be heard. No one suggesting the committee is a partisan enterprise should be acknowledged — even when it’s obvious to everyone that Democrats believe January 6 is somehow the best partisan argument they can make for themselves in these midterms.

The Democrats and their repeaters in the press don’t actually want the Cheney-Kinzinger Republicans to succeed, either. See how Cheney and Kinzinger won’t be in the House in 2023, and how the Democrats cynically supported what Biden calls the “extreme MAGA Republicans” in primary contests against Republicans who voted to impeach Trump over January 6. Of ten Republicans vote to impeach, four retired and four were defeated in primaries. Only two are on the ballot.

One of them is Rep. David Valadao of California. Before his primary in June, Democrats spent $110,000 on ads criticizing his impeachment vote. Now a Democrat PAC called the Voter Protection Project has created a website, traitordavidvaladao.com, calling Mr. Valadao “A Traitor Who Turned His Back On President Trump To Serve His Own Interests.”

This project claims to be “holding Republicans accountable for their attacks on the ballot box.” But in reality, It’s not about accountability. It’s about putting each and every Republican in the Tyranny of Fascism box, regardless of their actual votes and beliefs. Any Republican who seeks the approval of the press should see the dead end.

Biden’s latest speech against GOP tyranny was broadcast live on CNN, and then host Erin Burnett turned to a CNN repeater, and then to a panel of three liberals and a Cheney-Kinzinger Republican. After live coverage on MSNBC, Joy Reid turned to florid celebrations by Rep. Jamie Raskin, who called Biden’s speech “beautiful.” There was no “fact-checking” and no opposing view.

Later, ex-Republican Matthew Dowd attacked the media for its alleged objectivity as it scans polls and tries to figure out who will win. He compared Republicans to a devastating hurricane, and the media are like a weather man saying “oh, by the way, a hurricane is gonna hit in three days. Good night, and [I’m] not telling you what damage it’s gonna do, what you can do to prevent it.”

That’s the deranged sound of the Meathead Media, slanting everything in favor of Biden’s vote-for-us-or-else “democracy.”