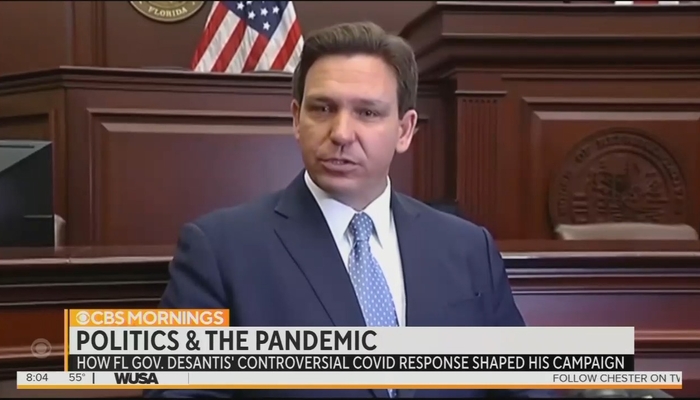 For anyone who’s been censored, dismissed, mocked, and trashed for opposing the initial, conventional wisdom on the coronavirus pandemic, Thursday’s CBS Mornings brought about some schadenfreude as co-host Tony Dokoupil went to Florida and found that Governor Ron DeSantis’s (R-FL) policies on the virus were not only popular, but even admitted that he might have been right.

Dokoupil said on one of two teases that COVID-19 “hit Florida hard, but Governor Ron DeSantis says he took the right approach for the state’s economy,” adding he would “show how pandemic politics are playing into the race for governor.”

He explained at the onset that “we are going to begin this hour with the legacy of COVID” as Florida “had the 12th highest death rate in the country, 382 fatalities for every 100,000 people, according to the CDC” while, “at the same time, Governor Ron DeSantis says he was right to reopen the state’s economy and remove restrictions long before many of his more cautious peers.”

“So now voters get to decide which approach they want to reward, the one in Florida and also beyond. For a moment in early 2020, every governor in America seemed to be saying the same thing,” he added.

But during those few weeks (or months for some), there was a reality of closed “schools and squeezing people’s ability to make a living,” including people such as Hialeah, Florida gym owner Eddie Morris, who told Dokoupil “[i]t was horrible” and he questioned whether he’d survive. Asked what would happen if their gym was in New York, Morris said he’d “be washed out.”

Prior to clips trashing him from MSNBC’s Vin Gupta and CNN’s Erin Burnett, Dokoupil stated that, “for Ron DeSantis, it meant reinvention as a national hero to some and a national target to others.”

Dokoupil then posed the question of whether he was right to CBS News medical contributor Dr. David Agus, who offered responses that came off like he was straining to avoid saying DeSantis was correct (click “expand”):

DOKOUPIL: So more than two years later, a question: Who was right?

DESANTIS [on 01/11/22]: We were right and they were wrong, and millions of families in Florida are better for it.

AGUS: I can’t say one right one wrong and that’s part of the problem. It’s not a binary black/white issue.

DOKOUPIL: One study tried to compare all of it, taking into consideration the economy, education, and public health. A final report card written in part by researchers from right-leaning organizations did give Florida an A while California and New York got failing grades. But another study in the journal Nature notes a problem, weighing “harms and benefits often comes down not to scientific calculations, but to value judgments.”

DOKOUPIL [TO AGUS]: Does Governor Ron DeSantis deserve credit for any part of his COVID policy that you’ve seen?

AGUS: I think he did provide leadership and you know, I respect that part of it and I give him credit for that.

Cutting deeper, Florida International University’s Dario Moreno said DeSantis “caught a mood in Florida that worked very much to his advantage” that Dokoupil diagnosed as “reopening in a state that practically runs on tourism and the service industry” that “actually put [him] in a stronger position today than when he first campaigned” in 2018.

As a result, Moreno explained DeSantis has made himself whom people see as having “stood up for freedom.”

Moreno went onto add that COVID has been “a deeply emotional issue” with people voting differently if their pandemic experience was losing their job or house versus those who lost a loved one.

Back live, co-host and Democratic donor Gayle King tried to pushback on Dokoupil’s insistence that he couldn’t find someone who was firmly against DeSantis and how he handled COVID, insisting “shutdowns…worked” and Floridians still won’t accept the facts (click “expand”):

KING: Yeah, I think the point about feelings being more important than facts and figures really resonates with a lot of people.

VLADIMIR DUTHIERS: If you are, as he said, somebody who lost somebody close to themselves, you have one way that you think about it. If you’re somebody who had it and nothing happened —

KING: Nothing happened to you.

DUTHIERS: — then you have another feeling about it.

DOKOUPIL: Yeah but see, lockdowns and shutdowns affect the whole State, whereas COVID fatalities affect only those households where they occur.

KING: But the shutdowns also worked, too.

DOKOUPIL: Well, so there’s debate about the extent to which there was a benefit and then this is where you get into the value judgment.

DOKOUPIL: And there’s not a clean answer. You can’t go to science and say, “Dear Science, what is the answer?”

To see the relevant CBS transcript from November 3, click here.