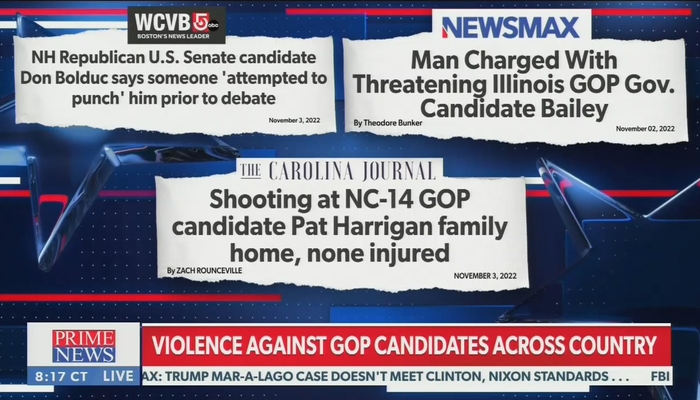 The leftist media spent most of the past week wringing their hands over an allegedly politically motivated attack against House Speaker Nancy Pelosi’s husband Paul but they have been silent on a shooting that took place at the home of Republican North Carolina congressional candidate Pat Harrigan’s parents. The shooter fired a gun through the window of the home where his children were sleeping, but thankfully no one was injured or killed.

ABC’s World News Tonight, CBS Evening News, and NBC Nightly News all ignored the incident on their Thursday evening newscasts. Instead of reporting on the latest violent attack against Republicans, the three networks decided local weather reports and a cotton shortage allegedly caused by “climate change” were all more important stories than a Republican candidate’s family’s home getting shot at.

According to the Carolina Journal (CJ), on October 18th the shooting took place at the home of the parents of GOP congressional candidate Pat Harrigan. Harrigan is running against Democrat State Senator Jeff Jackson in the 14th congressional district.

CJ had spoken with Harrigan’s campaign manager Brandon Craft who informed the outlet that someone had shot the home and that the incident is currently being investigated. According to Craft, Harrigan’s children were home when the shooting took place and were only a few feet away from where the bullet entered the home.

According to CJ, the campaign between Harrigan and Jackson has been heated, including “Harrigan recently challenging Jackson to a debate in an open letter and Jackson questioning Harrigan’s residency in NC-14.”

If Harrigan was a Democrat, the networks would’ve reported on this and used it as another example of Republican rhetoric killing “democracy.”

We already know the leftist media seeks to downplay violent attacks against conservatives while hyping violence against leftists.

As NewsBusters previously reported, the networks gave 11 times more coverage to the attack on Paul Pelosi than they did for the attempted assassination of Supreme Court Justice Brett Kavanaugh.

This latest example of bias by omission from the three networks were made possible byTD Ameritrade on ABC, United Healthcare on CBS, and Salonpas on NBC. Their information is linked.

The CDC lied and children died: Now come the lawsuits
Biden Tells Little Boy It’s Okay to Steal at ‘Friendsgiving’ Dinner with Service Members (VIDEO)
Woman traveled 3,000 miles to meet online boyfriend, then is gruesomely murdered, decapitated, and has her organs harvested
Has Your Tax Service Been Selling You Out to Facebook?
Teachers’ union president suggests criticism against her incites violence: ‘It will lead to violence’