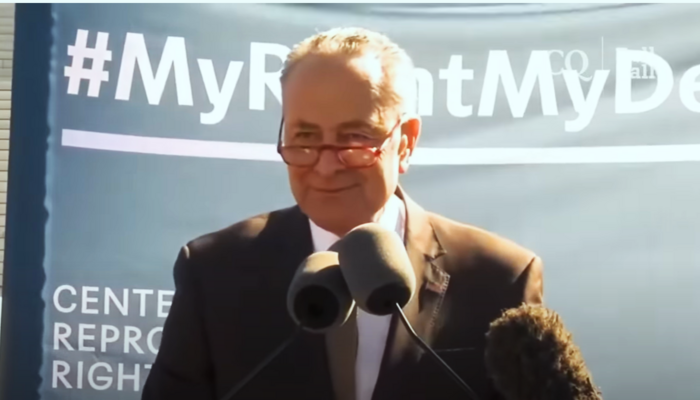 So there she was in living color.

Here’s the headline from CNBC:

Pelosi said in new Jan. 6 video she wanted to ‘punch’ Trump out

The story quotes Speaker of the House Nancy Pelosi, captured on video by her filmmaking daughter, as saying this of a potential visit to the Capital by then-President Donald Trump on January 6th of 2021:

And the outrage from the media? The media that was outraged at the recent — horrific — attack on Pelosi’s husband in their San Francisco home?

Are you kidding? There was no outrage. Zip, zero, nada, as the old saying from Rush Limbaugh goes.

But there’s more of this, much more. TNT Radio’s Steve Malzberg has been paying attention to the reality that the media simply falls silent when Democrats threaten violence. Some examples he has collected and plays on his own show are here:

— Joe Biden: In 2016, while campaigning for Hillary Clinton at a Pennsylvania rally for Hillary Clinton, Biden said the press asks him if he’d like to debate Trump. To which Biden replied that he wishes he and Donald Trump were in high school and he could take Trump behind the gym.

Biden repeated this at another rally as well, being more specific that he would like to “beat the hell” out of Trump.

— Then there was, infamously, this from New York Democrat and Senate Democratic Leader Chuck Schumer as he stood at a rally in front of the Supreme Court:

The threat to the two Supreme Court Justices appointed by President Trump was written up this way by The Washington Post: “Schumer’s remarks sounded like a threat to Chief Justice John G. Roberts Jr., who took the rare step of publicly scolding a senator Wednesday. In a statement, Roberts denounced Schumer’s comments as ‘inappropriate’ and ‘dangerous,’ stressing, ‘All members of the court will continue to do their job, without fear or favor, from whatever quarter.’

Warnings that judges, let alone members of the Supreme Court, will ‘pay the price’ and ‘won’t know what hit’ them sound ominous.”

— Then there was this headline about Hawaii’s Democrat Senator Mazie Hirono: “Sen. Mazie Hirono Says the Battle Against the Anti-Abortion Movement is ‘Literally a Call to Arms in Our Country’.”

In other words? All this sanctimonious nonsense from the media about Republicans calling for violence just goes silent when, time after time after time, Democrats do exactly that.

Republican Congressman Tom Emmer of Minnesota has noticed this double-standard and waded into the lion’s den of CBS to challenge host Margaret Brennan when she tried to play this blame game with Emmer. Replied the Congressman:

“I never saw anyone after Steve Scalise was shot by a Bernie Sanders supporter trying to equate Democratic rhetoric with those actions.”

The plain fact here is that, as always with the media, the double-standards game is in play. If Nancy Pelosi’s husband is attacked — Republicans are blamed. But if Nancy Pelosi herself is caught on video threatening the then-President of the United States vowing to “punch him out” then oh gee, its just another day in the neighborhood.

One would think that whether the target is Paul Pelosi or Steve Scalise or anyone else the idea that targeting them for violence is flatly unacceptable.

The hard truth, however, as Steve Malzberg illustrates, is that when a politician with the correct lefty credentials calls for violence – than their media cheerleaders could care less.