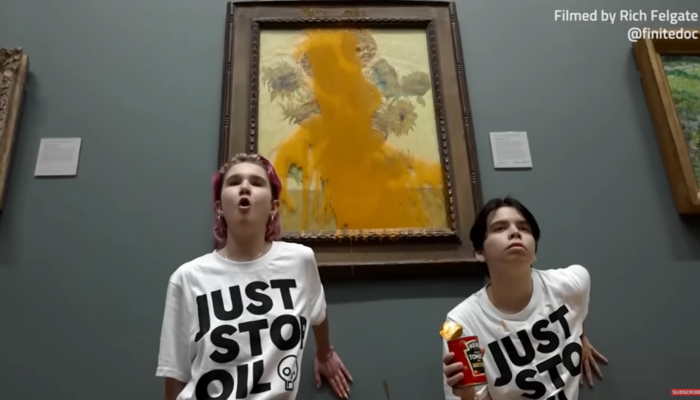 National Public Radio — the left-wing outfit that promoted the book In Defense of Looting — is also providing puffball interviews to one of those radical “Just Stop Oil” nuts who throw soup at a Van Gogh painting and then glued herself to the wall. On Tuesday’s Morning Edition, NPR host Steve Inskeep was promoting young, pink-haired Phoebe Plummer as she compared herself to Martin Luther King:

PHOEBE PLUMMER: This isn’t a popularity contest. We are making change. The suffragettes were famously despised. Martin Luther King was voted the most hated man in America when he was alive.

INSKEEP: Plummer is with Just Stop Oil, a climate activist organization in the U.K. Yesterday, the group sprayed orange paint in government and corporate buildings in London. In recent weeks, several groups in Europe have seized attention with protests against fossil fuel, and Plummer was involved in splashing a famous painting with soup. The painting was protected with glass, which can be cleaned, but Plummer intended to send an indelible message.

No ideological label! Not even “liberal”! Get a load of the questions — facilitations — uncorked by Inskeep:

There’s the two of you. You’re wearing Just Stop Oil T-shirts. You’ve gone beyond the rope that protects the painting. There’s tomato soup all over the painting on the wall. And each of your left hands are on the wall. What’s going on there?…

How did you choose Vincent Van Gogh and that particular painting? What did he do to you?

Phoebe Plummer, a climate activist with Just Stop Oil who threw soup on a van Gogh painting, explains what the group wants — and why they’re turning to controversial tactics to get it. https://t.co/8BTALKDvdK

Late in the interview, Inskeep suggested that stopping oil could “harm people who are poor,” and Plummer claimed “renewables are nine times cheaper.” This question was the “hardball,” the one about these protests leading to the election of people who would do “terrible, terrible things” — the Republicans!

STEVE INSKEEP: Suppose you were talking to someone who agrees with you about the danger of climate change but is not on the same page with you on the policy solution. I mean, it might be President Joe Biden, it could be a U.K. official, someone who says, I understand the long-term need to address this, but the immediate situation is that we’re in this conflict with Russia involving Ukraine. There are high energy prices. And as a matter of fact, it’s getting to the point where it endangers political majorities and could bring people to power who would do terrible, terrible things. We have to do this very carefully. How would you answer someone who says that?

PHOEBE PLUMMER: The fact is we don’t have any time to waste. Last year, the former chief scientific adviser for the U.K., Sir David King, said that what we do in the next three to four years will determine the future of humanity. When are we going to start listening to the scientists? When are we going to wake up and realize that if we don’t act now, we are going to see catastrophic outcomes?

This defines the parameters of debate at NPR, where Joe Biden is the most reasonable version of an Opposing View. Similarly, NPR promoted Plummer and her glue pal on the October 28 All Things Considered, where the range of debate was between leftist experts who wondered if the vandalism tactics were constructive.