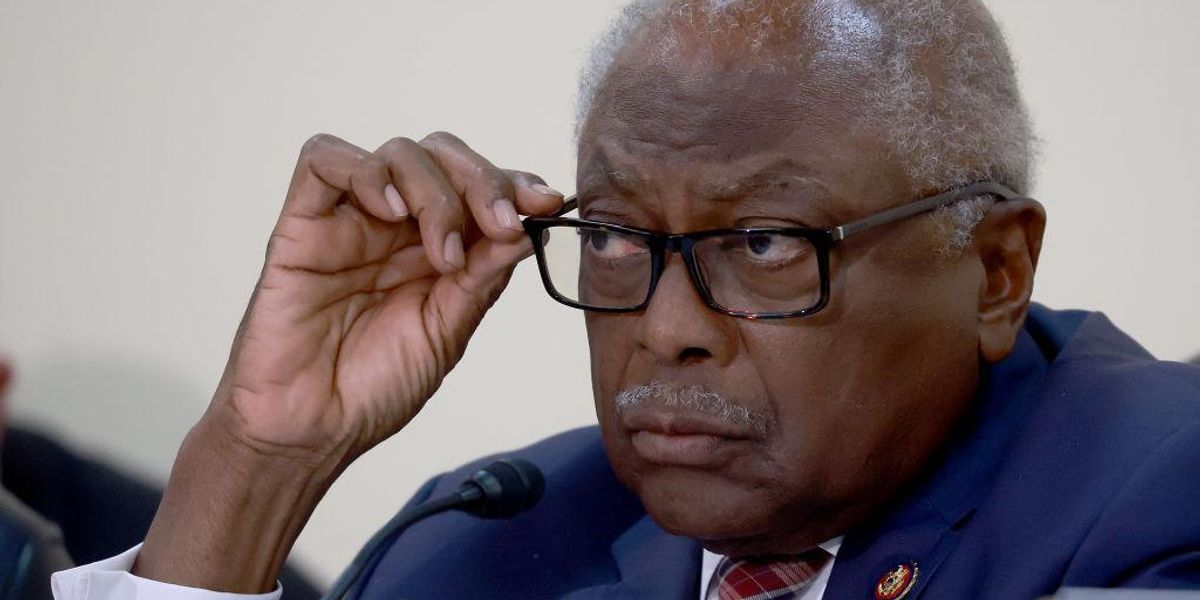 Every election cycle, House Majority Whip Rep. James Clyburn (D-S.C.) becomes acutely aware that Democrats’ failure to hold on to power might mean the end of democracy. On schedule, Clyburn has announced that “democracy will be ended” if Democrats do not secure a resounding victory on Tuesday.

Clyburn, the third highest-ranked Democrat in the House, previously stated that a Republican victory would be tantamount to the “end of the world.”

Over the weekend, Clyburn told “Fox News Sunday” that he didn’t mean to suggest a world-ending apocalypse was imminent, but rather that “Democracy will be ending. The world would continue to exist.”

“The world was here before Hitler, the world was here after Hitler,” Clyburn said, convinced there are parallels between the present political climate and German democracy ahead of the Hitlerian state socialists’ rise to power.

Clyburn, on the ballot in South Carolina on November 8, added, “The country is on track to repeat what happened in Germany, when it was the greatest democracy going, when it elected a chancellor that then co-opted the media.”

Clyburn favors the German parallels when denigrating his political rivals.

In July 2020, Clyburn accused the Trump administration of imposing “Gestapo activities” via federal police in Portland, Oregon, when cracking down on leftist terrorists. Clyburn suggested that the restoration of law and order sought by Trump was “the beginning of the ending of this democracy.”

In 2019, Clyburn compared Trump to Hitler, claiming the former was one of “the greatest threats to democracy in my lifetime.”

Although Democrats have long suggested their political misfortunes could only mean democracy is either broken or on its way out, the hyperbolic claim has been used extensively in recent weeks.

Sky News host Rita Panahi noted over the weekend that while Democrats castigate Republicans and conservatives for advancing so-called (and often confirmed) “conspiracy theories,” they themselves peddle an incredibly destructive notion: that voters have but one choice, lest they intend to destroy American democracy.

Panahi said, “It’s clear that the Democrats from the president down are not interested in campaigning on consequential issues. … No, they want to pretend that it’s democracy itself that is on the ballot this election.”

Even Democrats find this rhetoric hollow.

Longtime Democratic consultant Hilary Rosen told CNN, “We did not listen to voters in this election. And I think we’re going to have a bad night. … When voters tell you over and over and over again that they care mostly about the economy, listen to them. Stop talking about democracy being at stake.”

This round of democracy doomsayers

On Oct. 30 in Milwaukee, former President Barack Obama said that “democracy is at stake in this election” and threatened that if Republicans win on Nov. 8, “there’s no telling what might happen.”

Obama repeated this claim in Cleveland (“Democracy itself is on the ballot right now”) and in Laveen, Arizona.

Democracy, according to Hobbs, is that system by which Democrats attain and retain power.

On Nov. 1, former presidential candidate Hillary Clinton appeared on MSNBC’s “The ReidOut” with Joy Reid. Clinton did not use her air time to continue denying election results, but instead to suggest that entrusting power to Republicans “is a real threat to the heart of democracy.”

According to Clinton, the way to surmount the nation’s problems and to protect democracy is one-party control.

Biden, who previously called Republicans a “threat” to the nation, claimed, “American democracy is under attack … We must vote knowing who we have been and what we’re at risk of becoming. We must vote knowing what’s at stake and not just the policy of the moment — but institutions that have held us together, as we’ve sought a more perfect union, are also at stake.”

On Sunday, the borderline octogenarian told an audience at St. Lawrence University that “this is your generation’s moment to defend [democracy]. To preserve it. To choose it.”

Washington Post columnist and Council on Foreign Relations fellow Max Boot wrote on Oct. 24 that the midterm elections “are actually a referendum on whether you favor the continuation of democracy in America.”

Boot decried anyone who questioned the legitimacy of the 2020 election while suggesting that there is only one morally legitimate outcome of the 2022 elections.

In an October interview with NBC News’ Andrea Mitchell, House Speaker Nancy Pelosi stated, “Our democracy is at stake when you define democracy as integrity of the vote.” Pelosi used this line before.

When seeking to impeach former President Donald Trump, Pelosi said, “Our democracy is what is at stake. The president leaves us no choice but to act.”

The Hill reported that ahead of the 2018 midterm elections, former GOP mega-donor Seth Klarman told voters that they had to vote Democrat, stressing that “democracy is at stake.”

According to Klarman, a failure to “turn the House and Senate as a check on Donald Trump and his runaway presidency” might amount to the end of democracy. The Republicans held the Senate, yet American democracy survived.

That same month, Obama suggested that America couldn’t withstand another four years of Trump, saying, “Embrace your own responsibility as citizens – to make sure that the basic tenets of our democracy endure. Because that’s what is at stake right now. Our democracy.”

Sen. Amy Klobuchar (D-Minn.) said in 2019 that Trump’s rally jokes at Democrats’ expense made it “very clearer than ever that, literally, our democracy is at stake, our democracy at stake.”

When it came to Trump nominating a replacement for former Justice Anthony Kennedy, Pelosi said that Kennedy’s successor “could radically alter the course of American justice for decades. … The future of our democracy is at stake.”

It’s not just elections, judicial appointments, and jokes that Democrats claim put democracy at risk. Other perceived challenges to Democrats’ hold on power are similarly democratic risks, such as a failure to regulate speech on social media.