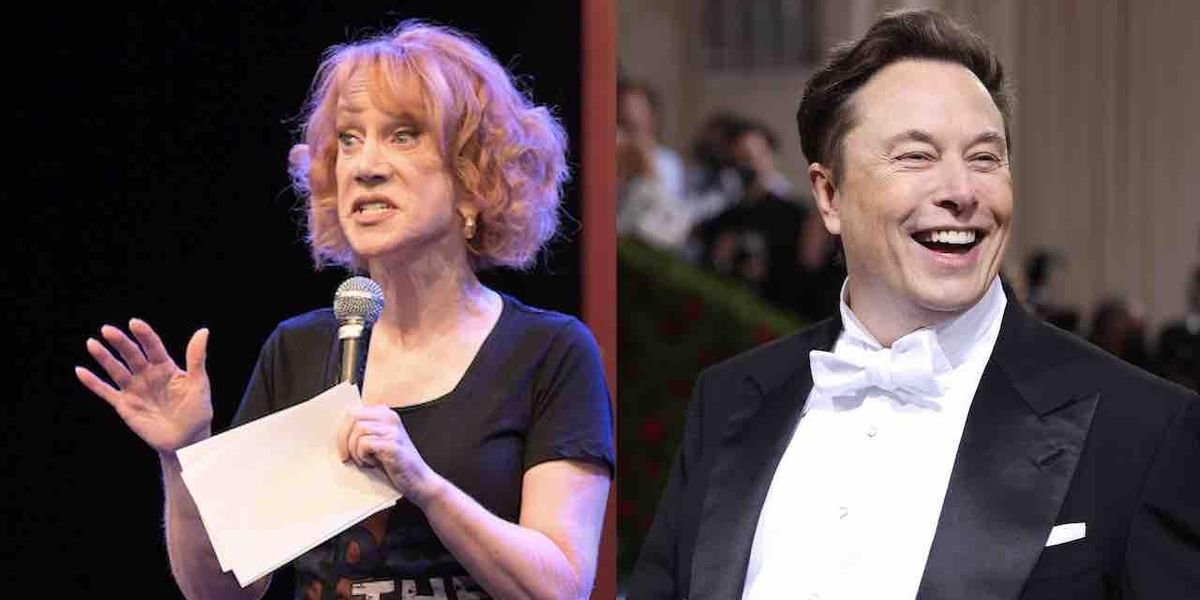 “I’m back from the grave to say … #FreeKathy …” the account for Griffin’s late mother read Sunday evening. That was followed by the following message: “Apologize in advance for all the comments you’re gonna have to read about how ugly I am, and they’re probably gonna throw you in there, too. Oh, by the way this is KG. I’m tweeting from my dead mother’s account. She would not mind.”

Musk, as he is wont to do, expertly trolled Griffin, noting on Twitter that “actually, she was suspended for impersonating a comedian” — a quip that’s garnered nearly 450,000 likes and counting since Sunday evening.

Griffin gets all worked up

Griffin can be a relentlessly surly soul when she’s offended. We’re talking about someone who accused a non-celebrity of attending the Jan. 6 riots and reported the person to the FBI — all after this everyday individual called Griffin “despicable.”

So you know she’s obsessed with digging into Musk with her myriad claws.

After Musk joked that Griffin was “suspended for impersonating a comedian,” she got predictably fired up:

u201c@elonmusk @bennyjohnson @kathygriffin I meanu2026 you stole that joke, you asshole. People have been posting that joke for hours, you hack.nLook, please do a better job running this company. It used to mean something. nThis is KG btwu201d

“I mean… you stole that joke, you asshole,” she wrote from her deceased mom’s account. “People have been posting that joke for hours, you hack. Look, please do a better job running this company. It used to mean something. This is KG btw.”

Some other tries from Griffin:

u201c@saraschaefer1 I honestly think itu2019s because itu2019s me, and because the tweets I was trying to write in his voice were pro democrats and had hashtags like #VoteBlueToProtectWomen and #voteblue and pro @BetoORourke etc.nOh Sara, this is KG btw.u201d

u201cElon, this is Maggie contacting you from the spirit world tell uu2026youu2019re a douchebag. This is not parody. This is the actual ghost of Kathy Griffinu2019s boxed wine loving mother saying Iu2019m gonna get tipsy & throw my bingo cards at you! NOT A PARODY. nTo the moon, a**hole. #FreeKathyu201d

Back in 2017, Griffin was granted a short respite from her life on the D list after infamously posing with a fake bloody head of then-President Donald Trump during a photo shoot. She soon apologized in the wake of massive backlash, and the stunt earned her a visit from the Secret Service. Later that year, Griffin took back her apology.

As readers of TheBlaze know all too well, Griffin’s nastiness is legendary: