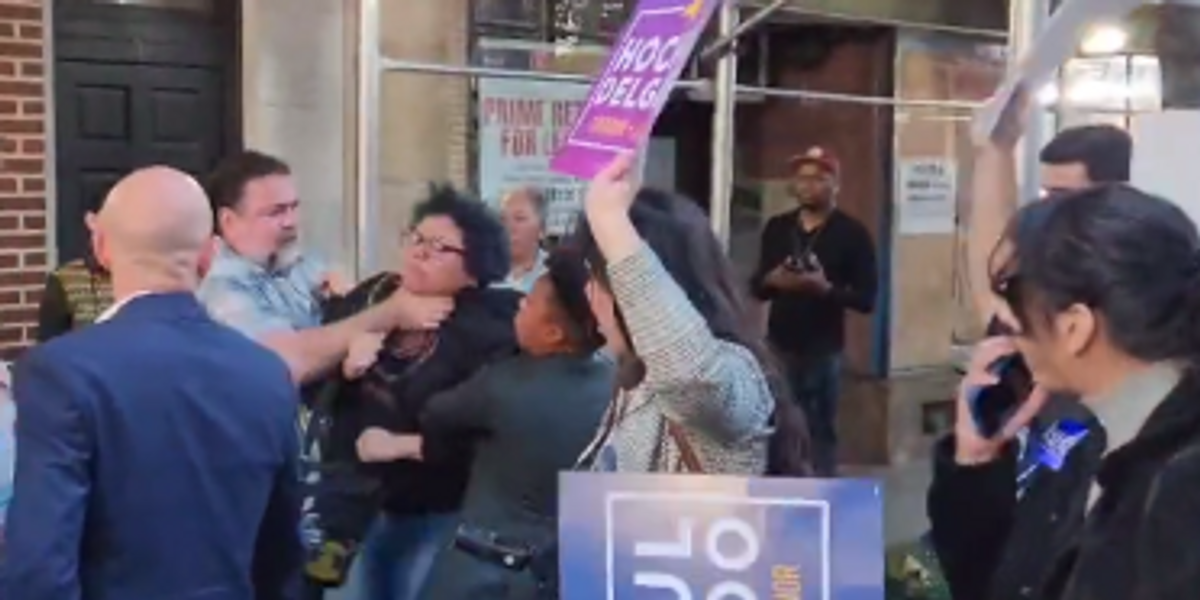 Video shows the shocking moment that a female supporter of Lee Zeldin was choked by a man during a rally for Gov. Kathy Hochul.

With the elections quickly approaching, Hochul held a rally near the LGBTQ landmark of the Stonewall Inn on Saturday night.

A young woman protested the rally while holding a sign that read: “Vote red” and “Vote them out” with a photo of Hochul on it.

The Twitter account Viral News NY captured video of the choking attack and interviewed the woman after the incident. The woman identified as Angelica Torres said the violence started after someone allegedly stole her sign from her.

“I was here holding my sign, and … peaceful protest, against you know, Gov. Hochul, and a woman — a very large heavyset woman, I’m assuming, you know, might have been a man — came and took my sign,” she explained.

“As I was trying to retrieve my sign, there was another man that came and choked me, and there were two other people that were coming and preventing me from trying to get my sign,” the unidentified woman claimed.

Video shows a man violently grabbing the woman’s neck and choking her.

“Never wanted to get physical with anyone, I was just there peacefully just holding my sign, and you know, they didn’t want to hear what I had to say,” she added.

Torres told Fox News, “I was very shocked and upset that I couldn’t express my opinions openly without violence. Crime and violence is a big issue in our city.”

Identities of the other individuals involved in the physical altercation have yet to be revealed.

u201cAt the Rally for governor Hochul a counter protesters was choked during the protest. I spoke with the woman who was attacked. Here’s what she had to sayu201d

The CDC lied and children died: Now come the lawsuits
America running out of key antibiotics and respiratory drugs for children amid “tripledemic”
Pennsylvania teenager accused of killing young girl, asking for help disposing of the body on Instagram
Politifact Joins ‘Spanish-Language Disinformation’ Grift
Chair of the Maricopa County Board of Supervisors Bill Gates Reportedly in Hiding