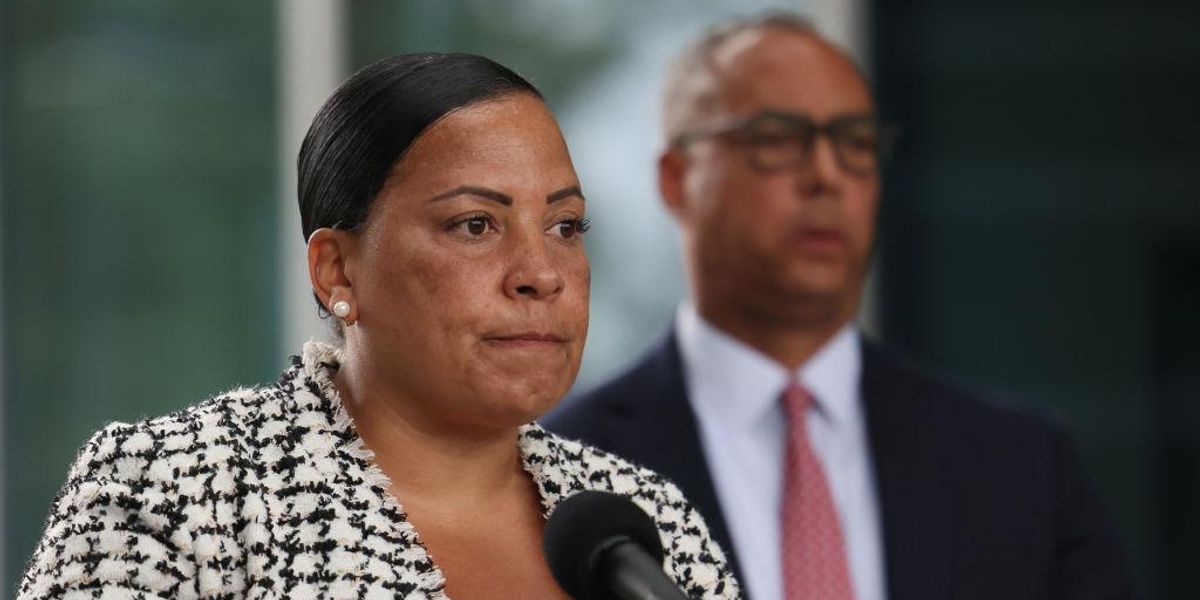 The Justice Department’s inspector general is investigating Massachusetts U.S. Attorney Rachael Rollins over a possible Hatch Act violation as well as for allegedly using a personal cell phone to conduct official business. According to the AP, this will be the second investigation into potential wrongdoing by the Democrat attorney since she took the role less than a year ago.

Rollins’ fate, pending the inspector general’s conclusions, will be decided by the individual who nominated her, President Joe Biden. If found to be in violation of the Hatch Act, Rollins can be removed from federal employment.

Rollins, a high-ranking federal law enforcement official, was confirmed in December 2021 with the help of a tie-breaking vote from Vice President Kamala Harris. Since gaining the top federal prosecutor position in Massachusetts, Rollins hasn’t been a stranger to the Biden family.

Rollins, who was a controversial pick for her opposition to prosecuting certain types of criminals, appeared at a Democratic National Committee fundraiser with first lady Jill Biden in Andover, Massachusetts, on July 7.

At the time, constitutional and civil liberties lawyer Harvey Silverglate told the Boston Herald that in light of “all the political divisions in the country, it would have been better advised to have not shown up. … It demonstrated questionable judgment.”

Donald Sherman, vice president of Citizens for Responsibility and Ethics, said, “Attending a fundraiser is fine, assuming they don’t invoke their office or use government resources to do it. … They can’t use their office to fundraise.”

Rollins reportedly rolled up to the event in a car with U.S. government plates during normal business hours.

Rollins claimed on Twitter — where she identifies as a “Justice Warrior” and “Glass Ceiling Demolisher” — that she had “approval to meet Dr. Biden,” but didn’t specify who had given her approval.

u201cI wasnu2019t asked for a comment before this ran. Itu2019s almost as if the Heraldu2069 didnu2019t want to know I had approval to meet Dr. Biden & left early to speak at 2 community events last night ud83eudd14 Alas, back to keeping Boston & MA Part 1 crime u2b07ufe0f Nice try though. https://t.co/wpVCUUdsevu201d

According to the AP, one person familiar with the approval Rollins referenced indicated that the Massachusetts attorney had been given limited permission to meet Jill Biden outside the home where the fundraiser took place.

The Boston Herald indicated that Rollins entered the home where the Democratic fundraiser was held with her nominator’s wife around 4:41 p.m.

After the event, Massachusetts Republican Party Chairman Jim Lyons called for the DOJ inspector general to launch an “immediate investigation,” claiming that Rollins’ appearance at the fundraiser was tantamount to her “using her position in law enforcement for political purposes.”

Lyons said, “This individual is Massachusetts’ lead federal prosecutor and is apparently attending high-dollar Democratic Party fundraisers during business hours on the taxpayer’s dime. … The Democrats do this because they believe the rule of law does not apply to them.”

Cotton noted that Rollins had attended the event “in her official capacity as United States Attorney for the District of Massachusetts. She reportedly even used a vehicle with government license plates to travel to and from the event.”

While Rollins remained unapologetic about her appearance, DOJ Attorney General Merrick Garland sent a memo instructing all employees to do all they can “to maintain public trust and ensure that politics — both in fact and appearance — does not compromise or affect the integrity of our work.”

WBUR reported that ahead of the inspector general’s investigation, the U.S. Office of Special Counsel opened an investigation into Rollins’ potential Hatch Act violation in August.

Off the record and on the road

Extra to allegedly having participated in a partisan function while on the taxpayer’s dime, the AP reported that Rollins is also under investigation for a questionable road trip and for using her personal cell phone to conduct official business — not unlike former presidential candidate Hillary Clinton’s contentious use of a personal email account at the State Department.

The trouble with using a personal device instead of a government-issued phone is that someone in a position such as Rollins’ might put sensitive data at risk as well as covertly transmit publicly relevant information without entering it into the record while serving in an official capacity.

Rollins had her road trip to California comped. She spoke to Hollywood elites and California political figures at CAA Amplify, not on her personal phone but in person. The AP noted that Justice Department employees are not supposed to accept payments for travel.