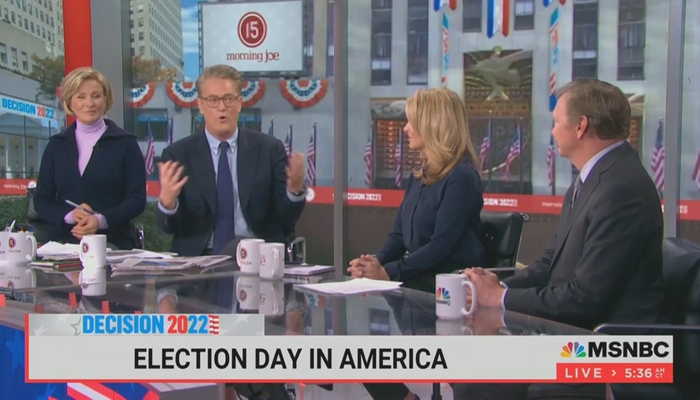 If you hadn’t noticed, Joe Scarborough’s transformation from hardcore conservative to partisan Democrat is complete.

On today’s Morning Joe, Scarborough waxed nostalgic over the 1998 midterm elections, when Rush Limbaugh was wrong in anticipating a Republican triumph after the Year of Lewinsky, and instead, Democrats enjoyed what Scarborough described as a “glorious night.”

Was it, though? Democrats added just five seats in the House, and there was no net change in the Senate. Republicans maintained control of both.

Scarborough shared his fond memory in the context of the panel’s optimistic theme of the day: nobody knows nuthin’ about how the midterms will turn out.

Maybe so, but then again, that’s the typical refrain of the party down in the polls. Be on the lookout for that classic line from people about to lose: “the only poll that counts is the one on Election Day!”

Note: In the same segment, Scarborough offered a shocking revelation. Again trying to keep hope alive for the Democrats, making the point that you never know how people are going to vote until they get into the voting booth, Scarborough said:

I know I have surprised myself in the past, when I’ve gone into a voting booth, thinking I was going to vote a certain way. And sometimes I’ve walked out of a voting booth going, huh, that’s interesting, okay. But that’s how most Americans go in. And sometimes they’re not even sure. That’s why, you know, we can’t predict based on the economy. It’s an entire collection of things . . . You have this remarkable thing called democracy and we get surprised more often than not. Don’t we?

On Morning Joe, Joe Scarborough waxing nostalgic about the 1998 midterms, in which Rush Limbaugh was wrong in anticipating a Republican triumph and Democrats instead had a “glorious night,” was sponsored in part by GlaxoSmithKline, maker of Voltaren, Etsy, and Abbott, maker of Rinvoq.

JOE SCARBOROUGH:  I do want to say one other thing too, about nobody knowing anything. I’m so glad you brought up 1998. Driving around my district, I was campaigning.

And I heard Rush Limbaugh howling, and he was laughing at the Democrats, these Democrats, they’re already circling the wagons. They’re already, cause the newspapers were filled with op-eds saying we’re going to lose badly in ’98 because we’ve allowed this guy, Bill Clinton, to put a moral stain on our party. And we have turned over. Congress is going to wipe us out. Because all the polls were saying that Democrats were going to get wiped out.

And Republicans were gleeful, and were saying, this is what you deserve. Three days later, we ran Newt Gingrich out of town. Because Democrats had a glorious night in 1998. You never know what’s going to happen. You just never know, do you?

George Takei of ‘Star Trek’ fame calls William Shatner ‘a cantankerous old man’
Diesel shortages loom as energy crisis enters “perfect storm”
OUT IN THE OPEN: UN and WEF admit to owning and controlling “science” and Big Tech
Unvaccinated blood sees demand increase all around the world
Video: Fugitive hiding under mattress opens fire on cops who were searching for him. It doesn’t end well for suspect.