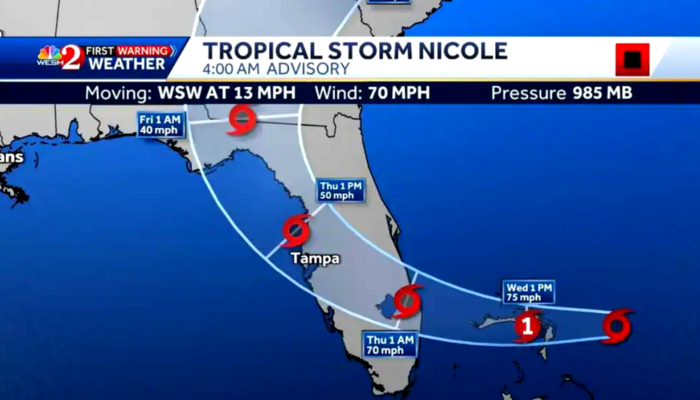 Tropical Storm Nicole which hit the Florida coast on Thursday has been made stronger due to climate change or so definitively claimed Will Wade of Bloomberg on Wednesday:

Wade then cites hurricane scientist Jeff Masters to make his case that such tropical storms and hurricanes are extremely rare in November. “As it barrels toward Florida’s east coast, Nicole is gaining strength from Atlantic Ocean waters that are about 2 degrees Fahrenheit warmer than usual, according to Jeff Masters, a meteorologist and author with Yale Climate Connections,” he wrote.

Only 13 tropical storms or hurricanes have made a contiguous U.S. landfall in November or December since 1851–an average of one every 13 years. Nicole is expected to be the 14th.https://t.co/VaFl57C2Zc

The implication is that Nicole is a sign that climate change is causing more November hurricanes which have made landfall on the U.S. coast. The problem is that Wade apparently did not check when the last time such an event happened. However, Scientific American provided that answer on Wednesday, “How Rare Are November Hurricanes?”

Historically, any November storms that do hit the U.S. have tended to strike Florida because they most commonly form in the nearby western Caribbean, Truchelut says. The most recent November hurricane to hit the state was Kate, which struck the Florida panhandle on November 22, 1985, as a category 2 storm.

So the last November landfall in Florida (and mainland USA since they all landed in Florida since 1900) by a hurricane or tropical storm was 1985. Therefore by the 13 year frequency rule of averages presented by Jeff Masters, another hurricane should have made mainland landfall by 1998 yet we are now 24 years past that due date with the arrival of Nicole.

Elon Musk calls New York Times ‘lobbying firm for far-left politicians’ after paper apparently ran no story about ‘The Twitter Files’
Is the GOP Underestimating Joe Biden?
Elementary school principal commits suicide at Disneyland after being charged with child endangerment and battery
NBC Fluffs Fauci in Interview: He’s Not Afraid to ‘Return to Masking’
Air Marshals threaten Biden with ‘mutiny’ if he tries to send them to southwest border