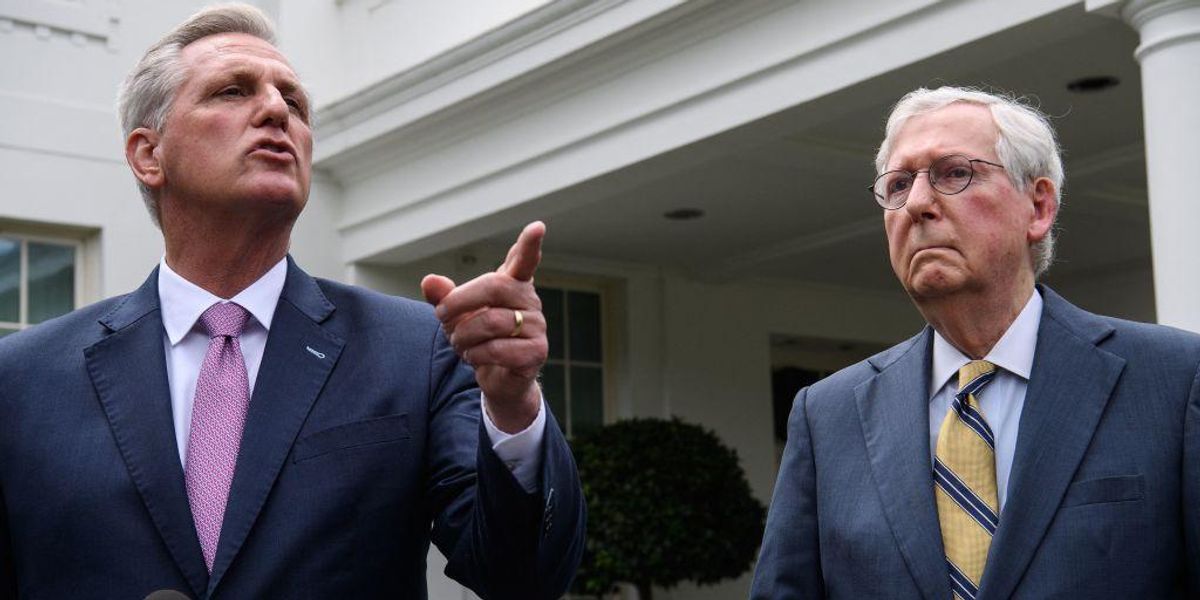 It’s deja vu all over again. I have more gray hair and a few more kids, but it’s like nothing has changed since the last big GOP win 12 years ago. My wife made this political cartoon for a column of mine during the “Tea Party wave” election of 2010 to accentuate the point that there is no purpose in winning an election to empower leaders who believe in handing the ball of power to the defeated team on every issue that matters. Here we are 12 years later, and McConnell is still at the helm of the party, even as he stands against conservatives on every issue that matters.

Likewise, Kevin McCarthy was the House GOP whip at the time of the Tea Party, and he has overseen the failed GOP bouts in the majority ever since as both majority leader and whip. Now he wants a promotion after failing to deliver on a “first and goal” play this election. Will conservatives ever learn to clean up their own yard before focusing solely on the Democrats?

While many are relieved election season is over, there is another election right around the corner that will determine whether the GOP’s win of House control (and potentially the Senate) will mean anything in the real world. The Senate and House GOP conferences, the roster of representatives and senators serving next year, will determine who will serve as their leaders. The question is very simple: Do they want the leader who agrees with the morass we find ourselves in or someone who is at least promising to capitalize on the flip in Congress to challenge Biden and promote a very different agenda for the country?

Mitch McConnell is a man who believes that funding the corrupt WEF-backed Ukrainian government is the most important policy issue of our time. He paved the way for the greatest legislative victory of the Biden administration and has agreed to pass an omnibus bill in the lame-duck session, which will undercut the leverage of a new GOP House majority for an entire year. He even voted to give the FBI billions of dollars to “red flag” political opponents in the first gun control bill to pass in years. To top it off, he spent millions of dollars defending Lisa Murkowski against her conservative opponent in Alaska after she voted against Trump’s Supreme Court nominee, Brett Kavanaugh.

Both McConnell and McCarthy refused to whip against the bill forcing states to elevate homosexual relations as a fundamental right to redefine marriage, and McConnell’s allies plan to pass it in the lame-duck session.

As for McCarthy, while he is trying to reinvent himself, he is the man who oversaw the lamest GOP agenda of all time during the 2017-2018 era, when Republicans enjoyed trifecta control. If Republicans wind up winning both chambers in the end, they will still claim their leverage is limited without the White House. But McCarthy was in power when they had all three branches, and he oversaw a dynamic in which almost every budget bill was passed out of his chamber with minority Republican/majority Democrat support – all with his blessing.

McCarthy was part of the original “young gun” movement within the GOP, along with Eric Cantor and Paul Ryan, whose brand of Republicanism has long since been repudiated. Why is McCarthy somehow the survivor from the old guard to lead us in a new era that requires new thinking to confront a new globalist/corporatist agenda that his donors are largely on board with? McCarthy has been fundraising against conservative candidates in the primaries even in deep red districts for years. Finally, leading into this election, he put out an uninspiring, weak agenda that failed to even recognize that our basic freedoms have been assaulted by the biomedical security state, an omission from the campaign that allowed the leftists to co-opt the issue of saving “democracy” during a time when their party (with the help of McCarthy’s GOP) put us into a state of martial law.

Isn’t it time to nominate party leaders who know what time it is rather than those who fight the members who are speaking to the issues of the time?

Despite the lethargic GOP showing for such an auspicious environment, Republicans will still fully control the House and may possibly still control the Senate. The economy will only get worse, and the policies of the Biden administration will remain unpopular and will get even worse. Biden promised on Wednesday, “I’m not gonna change anything in any fundamental way.” Which means conservatives still have a prime opportunity to check his power through the right hearings, must-pass legislation, and the budget process. The margins might be smaller than hoped, but that shouldn’t fundamentally matter if we have an effective leader.

In fact, the smaller margins will allow the few brave conservatives to announce they will not vote for Kevin McCarthy on the House floor during the January 3 speaker’s election. Although the GOP conference will meet next week to privately vote on the party’s nominee for speaker, along with majority leader, whip, and other positions, the position of speaker requires a second vote from the entire House body. A speaker is only elected if he garners a majority of those present and voting in the chamber.

So if Republicans have an eight-seat majority, for example, nine Republicans voting for someone else could deny McCarthy the speakership. There is no risk of Pelosi or another Democrat winning, because a plurality is not enough. This would trigger a deadlock and force negotiations, which can begin today if McCarthy realizes there are enough votes to deny him the office.

The most influential form of activism at this point would be for conservatives to call their respective representatives-elect and demand that they support a new leader and publicly declare their opposition to McCarthy. Likewise, all GOP senators should be encouraged to vote for someone other than McConnell for Senate majority leader. Although that vote is private and only among the GOP members, there is no reason why senators should not be forced to go on the record to declare their support or opposition to McConnell.

We need leaders who know what time it is, but we also need our voters to understand we are living in a new era of activism, when merely coming out to vote is not enough. We need follow through every day in these two years.